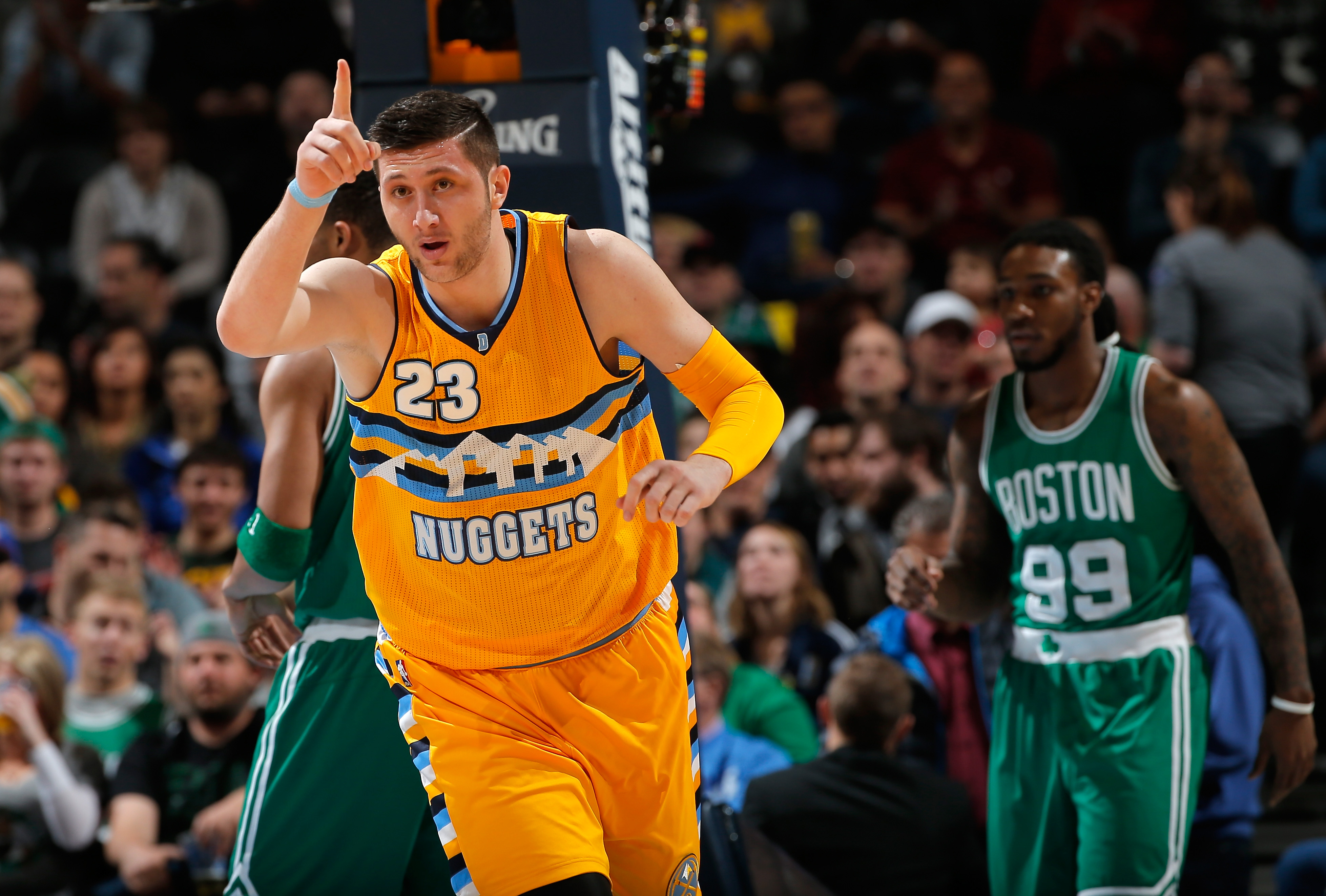 As the NBA trade deadline continues to grow closer, there are several potential trade targets ready to be shuttled from one team to the next. The leader of the pack is New York Knicks forward Carmelo Anthony and whether he lands with one of the Los Angeles Clippers and Cleveland Cavaliers and what the Knicks will get back in return to build around Kristaps Porzingis.

But there are other, lower-level players who might be moved as well. As always, there will be some surprises. The Cavaliers, already with rumored interest in Anthony, need a “playmaker” for that second unit. Will the Boston Celtics look to cash their chips and could Jimmy Butler be pried away from the Chicago Bulls? These are just a few of the big questions surrounding the NBA trade deadline.

Perhaps the most interesting player with the potential to be moved is Denver Nuggets center Jusuf Nurkić.

As a rookie, Nurkić was on the same playing time structure that Nikola Jokić was as a rookie and did some of the same things. As a rookie, Nurkić’s basic numbers – 6.9 points, 6.2 rebounds, 1.1 blocks – weren’t exciting. He was also averaging just 17.8 minutes per game. Still, his PER-36 numbers were great, with averages of 13.9 points, 12.5 rebounds, 1.6 assists, 1.7 steals and 2.2 blocks. On looks alone, he didn’t appear to be a great athlete, but he finished ninth in the league in ESPN’s defensive real plus-minus statistic.

But then, an injury in his sophomore season and the subsequent rise of Jokić into a budding superstar has Nurkić on the outside looking in. He’s still a good player, but the combination of Nurkić and Jokić didn’t work earlier in the season and Nurkić is now a season away from a contract extension off of his rookie contract. With rumors already discussing Denver’s desire to move him, Nurkić becomes one of the more interesting trade targets.

Here are some teams that intrigue me for Nurkić.

New Orleans Pelicans: The Pelicans are interesting to me because they never committed to Anthony Davis at center, even though it’s his best position. Despite Davis playing 46 percent of his minutes at center, the Pelicans could consider Nurkić as an option next to Davis and as a long-term piece for the roster. If the Pelicans can somehow add Nurkić while keeping Buddy Hield, it allows them to add a long-term piece in their starting five while keeping some of their young talent to go with Davis.

The issue with Davis’ past frontcourt partners – Omer Asik and Alexis Ajinca – has been the lack of defense alongside Davis. Nurkić isn’t a floor spacer, but he can at least defend the five and even stretch out and help against fellow power forwards. So far this season, Nurkić has allowed 0.90 PPP against the roll man in the pick and roll, via NBA.com/stats.

Portland Trail Blazers: Probably my favorite fit for Nurkić if he’s traded. Portland has Mason Plumlee for one more season, Ed Davis is best as a reserve and Festus Ezeli, the team’s offseason addition to shore up the position, is dealing with knee injuries that have kept him off the floor. Nurkić’s ability to make plays on both ends could fit in nicely with Portland’s roster.

The Blazers are struggling, but I believe they’re better than their record suggests. The combination of Damian Lillard and C.J. McCollum in the backcourt and the combination of Al-Farouq Aminu and Moe Harkless at the forward spots creates a nice balance of offense and defense. Nurkic in the middle doesn’t give them a rock solid rim protector, but someone who can defend on the pick and roll and help pick up the slack for the backcourt’s defensive shortcomings.

Milwaukee Bucks: I almost kept Milwaukee out the group, but the Miles Plumlee trade helped clear some space in their frontcourt. The Bucks have Spencer Hawes on a fair affordable contract for the 2017-18 season and Greg Monroe has to figure out whether or not he wants to opt out. Still, I like the idea of Nurkić in Milwaukee with all of those young players around him. I think he can fit alongside Jabari Parker and Thon Maker in the frontcourt and he’s a better defender than Monroe.

The center position around the league has been devalued, but it’s also stocked well. There aren’t many teams that need a starting center, and the ones that do could go with a cheaper alternative to Nurkić. Still, the talent should win out at the end of the day. Nurkic may not be as good as he was a rookie, but he’s still a talented big man who can make an impact and help a team on both sides of the floor.