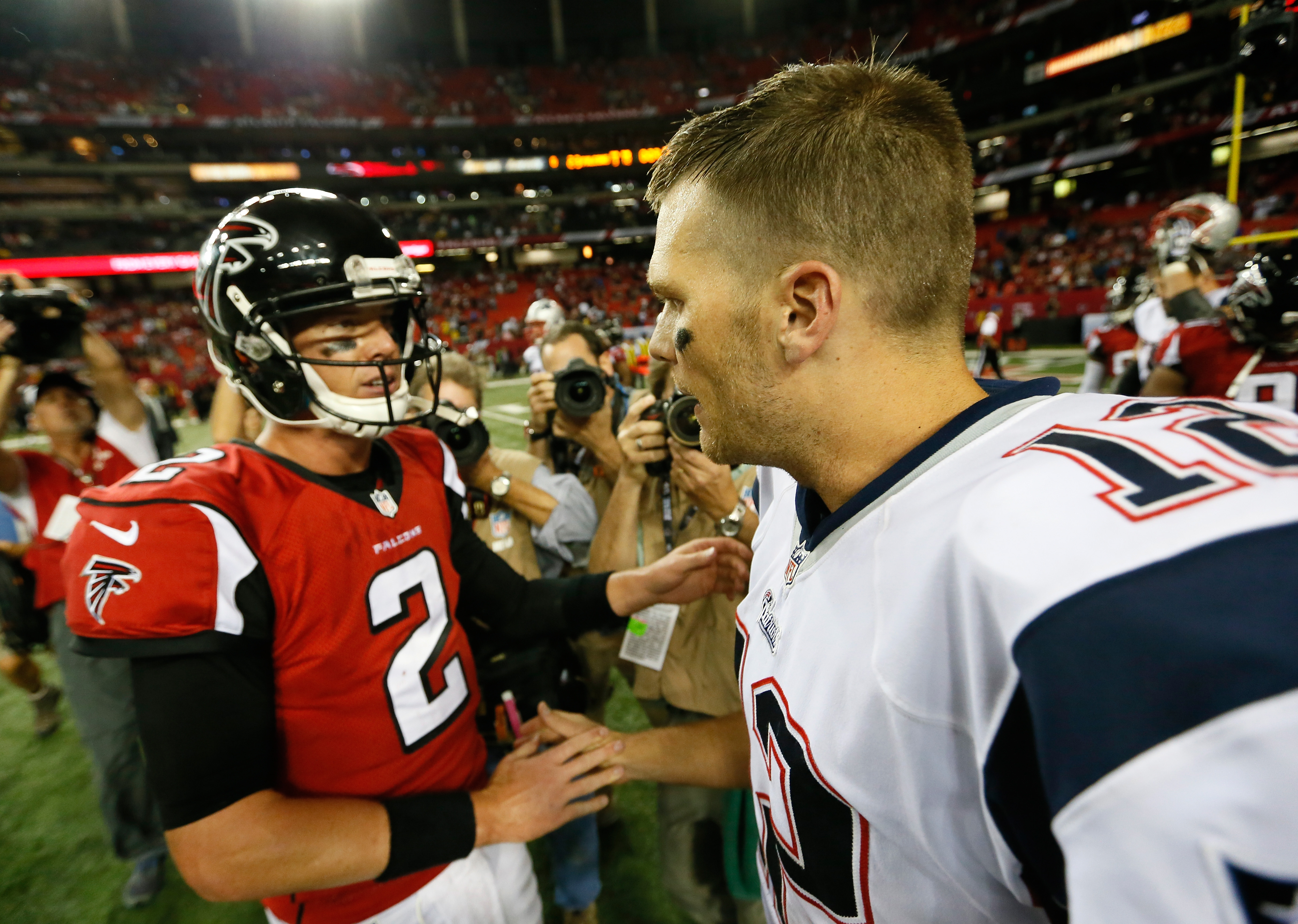 Super Bowl 51 is finally here, and will feature the league’s MVP in Matt Ryan and runner up Tom Brady.

Brady will be playing in his 7th Super Bowl as a starting quarterback, with this one probably having more significance than all the rest, thanks in large part to Deflategate.

Matty Ice will appear in his first ever Super Bowl, and comes in fresh off of being named league MVP on Saturday.

In their last matchup back in 2013, the Patriots beat Atlanta in the Georgia Dome 30-23, with Ryan throwing for over 400 yards. Three years later, they meet in the Super Bowl.

And here we go, with today’s game come a couple of interesting storylines for both quarterbacks.

1- The Falcons offense is on FIRE. During their six game win streak, they have averaged a whopping 39 points a game, Ryan hasn’t thrown an interception, and the Falcons haven’t scored fewer than 33 points in a game.

2- The Falcons offense will create matchup problems for the Patriots defense. Not only does Ryan have one of the best receivers in the game to throw to in Julio Jones, he’s also got a plethora of weapons at his disposal- Sanu, Hooper, Freeman, Coleman, and Taylor Gabriel.

3- The Patriots have weapons galore too, and will also create matchup problems for a young Falcons defense. From Julian Edelman, to Malcolm Mitchell, to Michael Floyd, to Chris Hogan, Martellus Bennett, Danny Amendola, LeGarrette Blount, James White, and Dion Lewis, the Patriots have a ton of options, and Brady is one of the very best at using them all.

4- Coaching, coaching, and more coaching. This is going to be a chess match, and it’s going to be awesome. Dan Quinn was the defensive coordinator of the Legion of Boom in Seattle, while Josh McDaniels ran the offense that picked apart that same defense in Super Bowl 49, when Brady tossed for over 300 yards and four touchdowns, including a near flawless 4th quarter performance. You’ve got to believe that Quinn has eyed the Super Bowl wins of the NY Giants, and seeing how that defense hit Brady over and over and over again.

5- Let’s be honest here, both the Falcons and Patriots played somewhat suspect teams on their route to Houston. Atlanta played a Seattle team that wasn’t very good, and then blitzkrieged a very banged up Packers team in the title game. New England beat what was probably the worst team in the playoffs in Houston, then beat up a Pittsburgh team that seemed lost once Le’Veon Bell left with an injury.

Give both teams credit though, they did what they had to do, and now they are one game away from being the league’s champion.

All in all, this is a pretty tough game to call. Both teams have killer offenses with a variety of weapons, two MVP candidates, and good defenses. In the end however, I believe you have to favor the coaching of New England and the x-factor that is Deflategate. Tom Brady, without saying it, seems to want NFL Commissioner Roger Goodell to personally hand him that Lombardi Trophy at the end of the night, and that kind of determination can be insatiable to a team.

Enjoy the Super Bowl everyone!