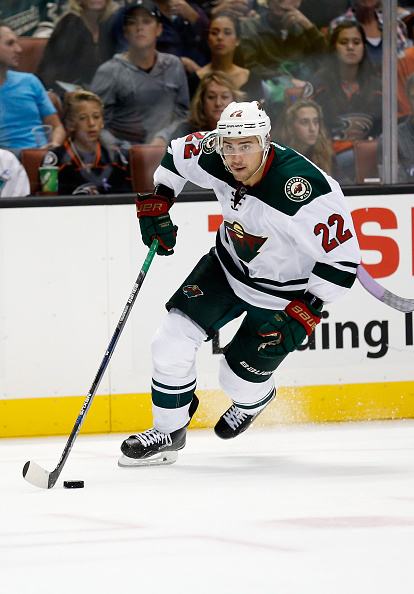 Happy Greeting Card / Chocolate and Flower day everyone!  Of course I’m talking about Valentine’s Day, the day where we add artificial stress to relationships or make others feel like crap for not being involved in one.  NHL teams go through their own sort of relationships.  They remember the small indiscretions, and it can occasionally boil over into plenty of trash talk, a scrum after the whistle or in some cases even a fight.  The Minnesota Wild certainly have shared their incidents of ‘bad blood’ over the years (see the Brad May sucker punch to Kim Johnsson, or Derek Boogaard shattering Todd Fedoruk‘s face, or Chris Kunitz pulling Brent Burns‘ hair).  As you can see in the list of examples there hasn’t been much in the way of recent indiscretions as all of those incidents occurred when Jacques Lemaire was still coach of the team.

With the Ducks trying to hold their position near the top of the Pacific division they will no doubt be a bit feisty as they make their way to St. Paul to face their former Head Coach, Bruce Boudreau.  Even he brought up the fact the first time the two played this season the awkwardness of seeing your former club as he compared it to running into your ex-girlfriend.  Hopefully it turns out better this time around.

1st Period Thoughts:  The Wild seemed to be a bit too comfy to start the 1st period, where they were skating with reasonable speed but they were not sending too many shots on goal.  The Ducks would strike first as Corey Perry carried the puck deep and then sent a centering pass near the crease that was pounced on by Joe Cramarossa who was inexplicably left all alone by Nate Prosser and after Devan Dubnyk stopped his initial shot, Cramarossa would bury the rebound.  1-0 Ducks.  It was weak and irresponsible defense by a player who doesn’t provide any offense.  Minnesota would draw a penalty as Eric Staal found Nino Niederreiter with a long pass and before he could race in on a breakaway he was hauled down by Nick Ritchie.  On the power play the Wild looked very hungry and assertive as the team worked a variety of plays from in close that kept John Gibson very busy in his paint.  I liked how Minnesota’s puck movement was quick and crisp and they came dangerously close to tying the game on two or three plays near the crease.  Minnesota kept playing with initiative and controlling the pace of play.  Additional power plays were not quite as effective as Anaheim did a better job of challenging Minnesota’s zone entries.  Minnesota still had some good opportunities but the Ducks were doing a good job at tying up Wild forwards so they could not pounce on rebounds and they’d go into the 1st intermission annoyed to be trailing by one despite outshooting Anaheim 13-8.  The defensive breakdown was sad.  3 defenders for 2 Anaheim forwards and players were caught watching the puck instead of accounting for their players in the defensive zone and the Ducks get the ever-important 1st goal.  The Ducks were playing the body as much as they can, but Minnesota was doing a good job at using its speed to draw penalties.

2nd Period Thoughts:  The 2nd period was eerily similar to the 1st.  Minnesota again carried the play with their hustle and scoring chances but I think it was a bit deceptive.  The Wild certainly were taking their chances to send any shot they had on goal, but most of these were from the perimeter without the benefit of traffic and even when they did put it on target John Gibson and his defense was able to sweep away or absorb rebounds before they became a problem.  The Ducks only had a few token shots on goal in the period, but Devan Dubnyk made each save a bit of an adventure as he looked to be fighting it tonight.  Minnesota must work for deflections and get players in around the crease to cash in as Gibson is not getting too much help from his blueline which was giving the Wild all kinds of time and space.  Eric Staal is really gripping the stick right now and he got set up for perhaps the best chance of the period on the power play but he couldn’t lift his one-timer high enough to get it above the glove of Gibson.  Later in the period he would fan on another shooting opportunity and while I’d love to see him rekindle his scoring touch he’s ice cold.  Mikael Granlund continues to dazzle with his ability to set up scoring chances with very small windows to work with.  Maybe its just me but I don’t see what Alex Tuch adds that Jordan Schroeder doesn’t.  Yes, Tuch’s 6’4″ 200+ lbs, but speed is Minnesota’s best asset and this is the kind of game where I think we missed some of his ability to push the pace.  The Wild were outshooting the Ducks 29-12 but Anaheim was ahead where it counts, on the scoreboard 1-0 going into the 3rd.

3rd Period Thoughts:  I am almost tempted to copy and paste what I wrote for the previous two periods.  The Wild stuck to the failed strategy of settling for shots from the perimeter and then either being unable to get to rebounds before Gibson could cover it up or had no one near the crease to do little or anything.  A lot will be made of how many shots the Wild put on goal, but not many chances from in close.  Sure the Wild drew power plays, they seemed to live in the Ducks’ zone most of the night but Gibson really just had to make the initial stop and that was usually all that was needed.  Give a ton of credit to the strength the Ducks’ defense showed all game.  Josh Manson, Kevin Bieksa, Cam Fowler and Hampus Lindholm were able to tie up Minnesota’s forwards consistently all game long.  If they were not tying them up they were knocking them to the ice, but the ultimate result was no 2nd and 3rd chances which has been a big factor in Minnesota’s offense all season.  The Wild more or less had to beat Gibson on the initial shot or it wasn’t going to happen.  Even with Antoine Vermette going nuts and slashing an official over a bad puck drop on a faceoff, the Wild failed to take advantage of their opportunities.  Dubnyk had to make a few saves as the Wild were trying to pour on the offense, but he was flopping around his crease like Anton Khudobin and turning routine stops into crazy adventures.  Anaheim would really go into lockdown mode as they started to challenge Minnesota’s puck entries and so the Wild had little quality chances in the closing minutes and would fall 1-0.

LW – Jordan Greenway (Boston, H-East) ~ the big power forward has been a bit quiet the last few games for the Terriers including Monday night’s Beanpot Championship loss to Harvard 6-3.  Even though he may not be putting up points recently, he continues to provide quality minutes for Boston University as he had 2 shots on goal and finished the game with a +1 rating.  Greenway has 7 goals, 24 points, 60 PIM’s and is a +12 in 28 games.

G – Kaapo Kahkonen (Lukko, Sm-Liiga) ~ the Wild’s ‘forgotten’ goaltender prospect is having a reasonable season in Finland’s best league.  Kahkonen has a 9-9-8 record, 2.53 goals against average, and a .920% save percentage with 1 shutout.

Cousins after victory: 'Feed me'

It’s a plain and simple concept. There is absolutely no one in the NBA that can guard DeMarcus Cousins. In tonight’s game against the Los...