The Ups and Downs of Sam Gagner 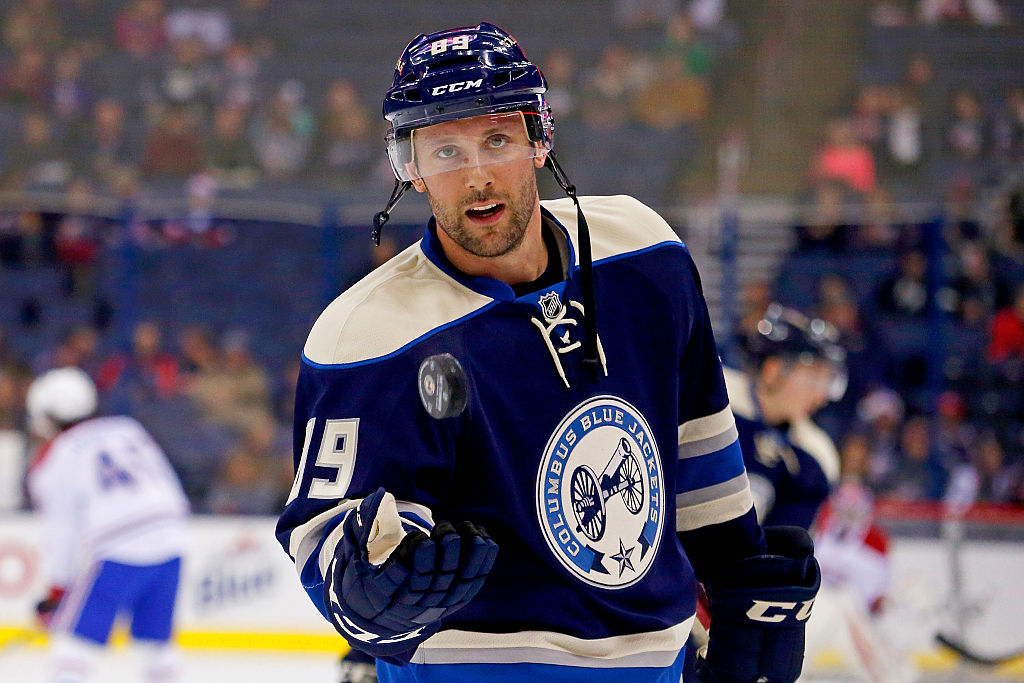 The Ups and Downs of Sam Gagner

Wins have not come so easily to the Blue Jackets in the days since the end of their 16-game streak. In a way, this was to be expected. Teams don’t win that many games too often, after all. But the journey back to earth has been painful in places, and a prime example of the change in fate is Columbus forward Sam Gagner.

Focusing on the past first: early-season Sam Gagner was featured in stories of redemption, centering on his cheap contract (only $0.650M via Cap Friendly) and prior lack of point success with the Flyers (only 0.30 points per game in Philly last year, via Hockey-Reference). Small money and an off-year in Orange provided a sharp contrast with Gagner’s Columbus success and made for a great resurrection tale. Here was a former top-10 draft pick finding his way out of the wilderness, wanted once again, recognizing his (potentially) final NHL opportunity and reaching new personal heights in the process.

And to be fair, Gagner’s scoring (and assisting) touch seemed like a revelation. From the season opener through December 23 (a 2-1 CBJ win versus Montreal), Gagner had 14 goals and 12 assists, good for 26 points in 31 games (player game log info via Hockey-Reference).

After December 23? Gagner went cold, and continues to be cold. The forward has 0 goals and only 8 assists in the 23 games since, a level close to his low per-game point pace from Philadelphia. Just last week, Gagner was the focus of a feature in the Dispatch, exploring the player’s production woes and the need to improve.

The change seems concerning. However, the issue is more complicated than just points, especially if we break apart Gagner’s performance between his even strength play and powerplay production.

Minimal Changes for Gagner at Even Strength

A major part of Sam Gagner’s Columbus point surge was his place on the NHL’s most productive powerplay. Through December 23, 12 of Gagner’s 26 points came via the powerplay (via Hockey-Reference). An underreported element is Gagner’s even strength prowess alongside Scott Hartnell and Lukas Sedlak (his most common linemates, via Hockey Viz). It turns out that Gagner has been an above-50% shot differential player for the Jackets over the course of the season (53.06%, via Natural Stat Trick).

So a question arises: has Gagner’s overall 5v5 play changed during his scoring slump? Is that 53% rating a vestige of the past, or has he continued to chug along (sans points)?

We can explore this issue using data from the Corsica Custom Skaters Query. Below, I present Gagner’s 5v5 performance in his 31 CBJ games through 12/23 and the after 23 games 12/23. For each statistic, I’ve included the percent change (percent increase or decrease in the most recent games, as compared to the initial set). This information comes with a small sample size warning caveat, as 31 and 23 games don’t tell us everything about the player.

Besides the obvious goal drought and point dip, things don’t look so bad for Sam Gagner. The forward’s shot differential (CF%), scoring chance percent (SCF%), and expected goals percent (xGF%) have all either improved or remained constant compared to his initial games. The bad news? Gagner’s even strength scoring chance generation has dipped per time on ice, both in an on-ice perspective (SCF/60) and an individual contribution (iSCF/60).

What’s the takeaway? Both before and after the goal drought, Sam Gagner has been helping to drive play the right way at 5v5 (with CF%, SCF%, and xGF% all well above 50%). However, Gagner’s total number of scoring chances have dropped a bit (meaning both SC for and SC against are down).

Should Gagner alone get credit for his actions? That’s a much harder question. Gagner was reasonably shot-productive when with Edmonton, a fact that may be overlooked due to the Oilers’ perpetual team-wide problems (numbers at Hockey-Reference). Then again, one of Gagner’s most common linemates (Scott Hartnell) has a history of being productive when evaluated through shot metrics (check out Hartnell’s CF% numbers at Hockey-Reference).

Examined from an altogether different angle, Sam Gagner is regularly matched against 3rd and 4th line forward competition (using data from Hockey Viz). In that regard, being a great shot generator may not be quite as impressive. However, the outcome is far better than the alternative. It’s good strategic news for Columbus that the team can deploy a 3rd or 4th line that can so easily overwhelm matched opposition.

In short, the ultimate reason behind Gagner’s even strength shot success isn’t entirely clear. However, the Gagner line as a net-positive shooting performance provides further value to the Blue Jackets, even if Gagner himself has slowed in 5v5 point production.

Sam Gagner and the Powerplay Slowdown

Through December 23, the Columbus Blue Jackets’ powerplay was converting 26.9% of man-advantage opportunities into goals (25 for 93). The last time an NHL team hit a level that high over an entire season? The 1989-90 Calgary Flames, led by a 23-year old Joe Nieuwendyk (27.7% conversion, via Hockey-Reference). Based on history alone, it was unlikely the CBJ would continue their outrageous pace for the rest of the year.

After December 23, the Blue Jackets fell relatively flat, scoring on only 16.4% of powerplay opportunities. Based on season-long performances as of this writing (February 14th), that pace would be in the NHL’s bottom 6 in the 16-17 season (via Hockey-Reference).

Course correction has come to Columbus in a rude way, and Sam Gagner is a good representative of players suffering the consequences. Again, using Corsica’s Skater Custom Query, we can pull Gagner’s data and consider his 5v4 performances through December 23, and then after. It’s worth noting that some instances of powerplay may not appear (5v4 excludes two-man advantage, or 6v4 empty net scenarios), but should give us some insight into the forward’s production. Once more, we must be cautious of sample size and remember to look for trends (rather than specific details).

Recent games have not been so kind to Sam Gagner on the powerplay. Shots attempts (CF/60), scoring chances (SCF/60), and expected goals have (xGF/60) all dropped per time on ice compared to the early season data. Furthermore, Gagner’s individual contributions have dried up (both iCF/60 and iSCF/60 are down).

What’s to blame for the changes? Our own Jeremy Crowe (@307x) sees it, in part, as an issue of opposition adjustment. Jeremy posits, “The powerplay set-up hasn’t changed all that much, but other teams are playing against the set-up more effectively. And when the Jackets try a different set-up, it hasn’t been effective. Like 2/13 against the Rangers, the set-up was mostly the same for the first unit, but the second unit had different personnel and were playing in marginally different positions.”

Jeremy did, however, note a few on-and-off tweaks to the powerplay in recent games (and highlighted the move during the 2/13 match against New York). “A different set-up for the first unit had Gagner playing the point instead of the slot area, and Werenski more over to the left side of the blueline. This allows both Werenski and Gagner the flexibility to maneuver into their normal spots if the opportunity presents itself, but does not lend itself to generating one-timers or quick passes. But it hasn’t stuck for more than, say, a single set-up. Usually, once it fails, that unit changes off and we don’t see it again.”

The combination of SH% collapse and league-wide adjustment to the red-hot CBJ powerplay means a minimized impact, and helps to depress Columbus scoring.

The “good” news (albeit, not especially striking) is that the Jackets still haven’t surrendered many shots and chances against while on the powerplay. Sam Gagner’s 5v4 CF%, SCF%, and xGF% all remain mostly unchanged over the course of the year, meaning the Columbus powerplay is overwhelmingly likely to keep opponents off the scoreboard. The NYR shorthanded goal on February 13 marked the first such tally for an opposing team against the Blue Jackets this season. It’s small solace for a team that could use the previous high powerplay production, but at least there’s some good news.

Sam Gagner’s goal scoring drought has now hit 23 games, a far cry from the highs of the early season. However, not all is lost for the player in an individual sense. Gagner’s line continues to make positive impacts at even strength, even if scoring has dropped a bit. It’s an aspect to Gagner’s game that deserves more praise and gives the Blue Jackets an excellent depth matchup as well as a likely shot-battle victory against most other NHL teams.

The bad news comes in a place that afflicts more than just Gagner: the powerplay. Some of the change is due to a drop in SH%, but opposition adjustment and Columbus drops in shot generation have severely impacted the once-mighty man advantage.

Should Sam Gagner manage to reclaim his prior 5v5 scoring ability, the result will be additional reward atop an already successful campaign for the 27-year old. In order for 5v4 impacts to return, Gagner alone is not the answer, as the Blue Jackets must adapt to the other 29 NHL teams, all now ready to halt the CBJ attack.