Zucker, Koivu, Granlund Too Much For Nashville to Handle in 5-2 Victory 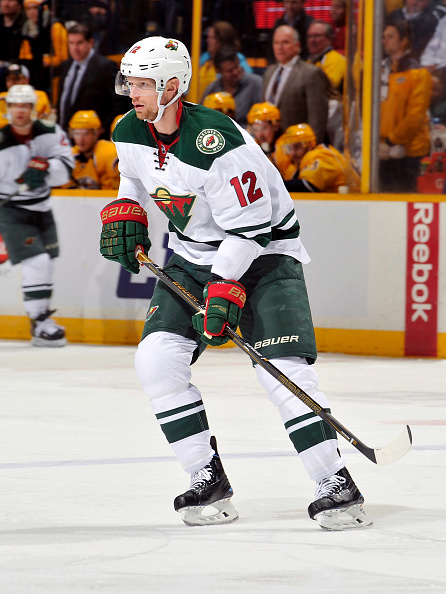 Anytime the Minnesota Wild make their way to Nashville to play the Predators they understand two basic truths.  One, they know it will likely be a decent back-and-forth game as one would expect against two rivals.  Two, that even though its been 5 years since Ryan Suter signed with the Wild the Predators fans are going to boo him every time he touches the puck.

So have the Predators finally brought in a player Wild fans can feel comfortable boo’ing at incessantly in former Colorado Avalanche agitator, the no-toothed Cody McLeod?  I hope so, because maybe this stupid petty act will finally end when they see just how lame it is.  In the meantime we can simply enjoy beating them.  Can the Wild earn another 2 points against a Central division foe?  (Sadly, McLeod didn’t dress tonight)

1st Period Thoughts:  Much was made of the 5-day break the Predators were coming off of and the Wild were flying around early.  Minnesota used its speed well to put Nashville’s defense on its heels and perhaps out of frustration the Predators would take the first power play.  Marco Scandella seemed to shove Harry Zolnierczyk towards Devan Dubnyk but as he moved into the crease the Predators tough guy got his arms up to maximize his contact with the Wild goalie instead of minimizing it.  Dubnyk took the hit and then roughed up Zolnierczyk as Minnesota skated to the defense of their goalie and luckily for the Wild they’d end up with the man advantage.  On the power play Minnesota wasted little time in lighting the lamp as Nino Niederreiter got a little space and drove hard to the net that Pekka Rinne stopped but the Wild crashed the crease and Mikael Granlund jammed home the loose puck.  1-0 Minnesota.  The Wild continued to give Nashville problems with its speed and they’d draw some more penalties.  Yet after the goal the Wild’s execution left a lot to be desired as passes lacked the crispness they needed and some of the decision-making was a bit of a head scratcher.  The Wild was almost overhandling the puck as they were attempting to set up some kind of tic-tac-toe goal instead of taking it right to the Predators crease as they did on their goal.  The Wild were being careless and it nearly cost them as Ryan Ellis raced down the ice on a breakaway only to be stonewalled by a desperate stack of the pads by Dubnyk.  The Predators didn’t do much offensively either, but one player who didn’t seem to be terribly rusty was Viktor Arvidsson who reminded me a lot of a less dirty version of Brad Marchand out there.  Very pesky.  There was some fireworks at the end of the period as a coincidental unsportsmanlike minors to Minnesota’s Chris Stewart and Nashville’s Austin Watson turned into a fight as they both left the box in the closing seconds of the 1st.  Stewart got the clear win, but mostly inconsequential when you consider it was the end of the period.  I thought Niederreiter, Jason Zucker, Granlund and Mikko Koivu were the best forwards on the ice for Minnesota.  They seemed to be moving well and exhibiting great chemistry with one another.  Beyond that everyone else seemed to be waiting for something to happen than taking the steps to initiate a scoring chance or a play themselves.  Jared Spurgeon, Ryan Suter and Jonas Brodin who just returned from injury looked very good too.

2nd Period Thoughts:  The 2nd period was another dominant effort for the Minnesota Wild but they really had nothing to show for it.  Minnesota at times was guilty of trying one-too-many passes at the wrong moments to thwart their own potential scoring chances but down the stretch they’d simplify their game and pepper Pekka Rinne with shots but he was sharp and the Wild couldn’t extend their lead.  Even though the Wild were not finding the back of the net on some prime opportunities they kept plugging away and applying offensive pressure.  Minnesota’s persistence would finally be rewarded as a turnover in the neutral zone turned into a 2-on-1 between Granlund and Zucker and Granlund made a perfect cross-ice pass by a sprawling Nashville defender to Zucker who lifted his shot over the outstretched leg of Rinne.  2-0 Wild.  The Wild kept attacking as they sensed blood in the water, but their energized play would result in a penalty as Zach Parise was tagged for cross checking.  Nashville tried to counter and a turnover in the neutral zone turned into a 2-on-1 but they were stymied by a great play by Spurgeon.  The Predators penalty kill didn’t manage much more than a few points shots that were little trouble for Devan Dubnyk who looked efficient in his post-to-post movement.  Minnesota would get the kill and then go right back on the attack and the Wild threatened to add to their lead but looked confident carrying a 2-0 lead going into the 2nd intermission.  Shots were a bit more even (13-11 Wild), but Minnesota had the lion’s share of quality chances.

3rd Period Thoughts:  The Minnesota Wild would get an early goal to start the 3rd period, as the line of Koivu, Granlund and Zucker continued to pace the team offensively as they worked a puck deep off the boards and it would carom off the wall and the side of the net out front where Koivu lifted a shot by a surprised Rinne.  3-0 Wild on Koivu’s 600th NHL point.  Minnesota would then go into coast mode and this added unnecessary drama to what should’ve been a shutout win.  The Predators took advantage of the Wild taking their foot off the gas and a bad turnover on a weak backhanded pass by Scandella turned into offense for the Predators and they’d cash in as Colin Wilson buried a shot by Dubnyk.  A few minutes later the Predators would add another as P.K. Subban stepped into a slap shot that beat Dubnyk who was screened by James Neal.  The goal was immediately waived off as they felt there may have been goaltender interference on Neal, but the Predators would challenge the call.  The replay demonstrated the puck was by Dubnyk and in the goal by the time Neal made contact with Dubnyk and so the goal would stand and Minnesota’s lead was reduced to one.  I know on Twitter the successful Predators’ challenge drew a firestorm of tweets by angry Wild fans who felt the head contact Neal made was not punished.  Here’s my take.  Goaltenders embellish any contact and I don’t think Neal did anything egregious on the play to warrant a penalty as he has a right to the ice in front of the crease as much as Dubnyk does.  In my opinion the non-call was just fine.  Fortunately the Wild would get a little more focused defensively after Subban’s goal, and Minnesota started to take away more time and space but the Predators strategy was obvious.  Throw any pucks you can on goal and crash the crease and hope to jam home a rebound.  Dubnyk had to deal with some rough plays near his paint but he did a nice job of absorbing rebounds.  Minnesota needed a goal to put the Predators back on its heels and they’d get one on a great individual effort by Jason Zucker who blocked a shot and then skated down the loose puck and then outskated Subban to move in on Rinne before beating him with a sneaky 5-hole shot to give the Wild a 2-goal cushion.  The goal took the wind out of the Predators’ sails and the Wild would seal the game with an Eric Staal empty netter to earn a 5-2 victory.

Devan Dubnyk had a much better game than his previous start by making 37 saves in the victory.  I felt his economy of movement was the best we’ve seen in a while and his rebound control was excellent as he had a fair amount of traffic near his crease.  Defensively he got some decent help from Ryan Suter, Jared Spurgeon and Jonas Brodin who I felt were superb this evening.  The Wild stayed remarkably disciplined in a game where there was plenty of chippy plays after the whistle.

Offensively the line of Koivu, Granlund and Zucker were by far the Wild’s best threat all game long.  They used their speed and their ability to cycle caused all kinds of havoc in the offensive zone.  Even though Niederreiter ended up with one assist I felt he had a very strong game and was absolutely tremendous down low with the puck.  The 4th line had some good shifts offensively and I liked the modified version of Erik Haula, Jordan Schroeder and Zach Parise and I hope Bruce Boudreau tries that every now and then to change the pace a bit.  Great speed and very pesky.

The game was not perfect.  Minnesota had some let downs, but they didn’t let that define the game.  The Wild kept working hard and they were eventually rewarded.  With a Chicago loss in regulation to Edmonton gives the Wild a 9-point lead on the Blackhawks.  The Wild head coach was a bit annoyed in his post-game presser as he felt his club let up and made it harder than it had to be and I have to agree with him.  Now the Wild must rest up and refocus for what will be a real good battle against Chicago on Tuesday.

RW – Jordan Greenway (Boston U., H-East) ~ the power forward was kept off the scoreboard in the Beanpot championship game, but he rallied back with a goal and a crucial assist on the game-tying goal as the Terriers battled to a 4-4 tie against New Hampshire.  Greenway has 8 goals, 26 points, 60 PIM’s and is a +13 in 29 games. 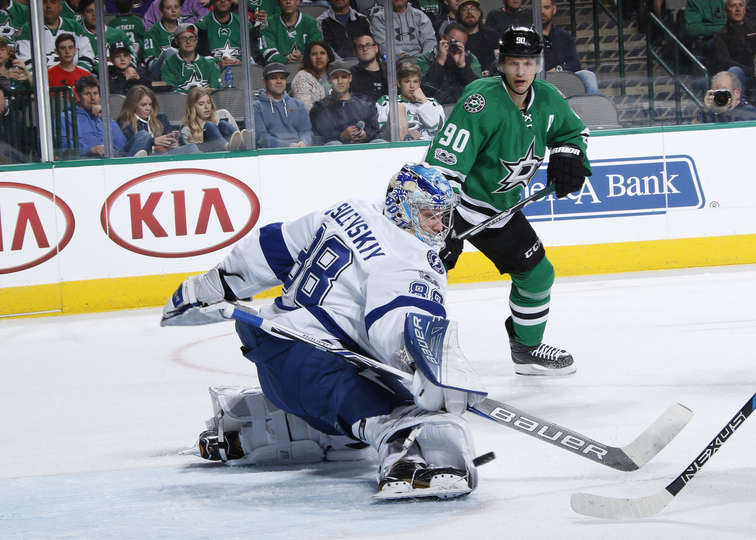 The Lightning returned to action for the first half of a back to back on the road in Dallas Saturday night. After enjoying five days...