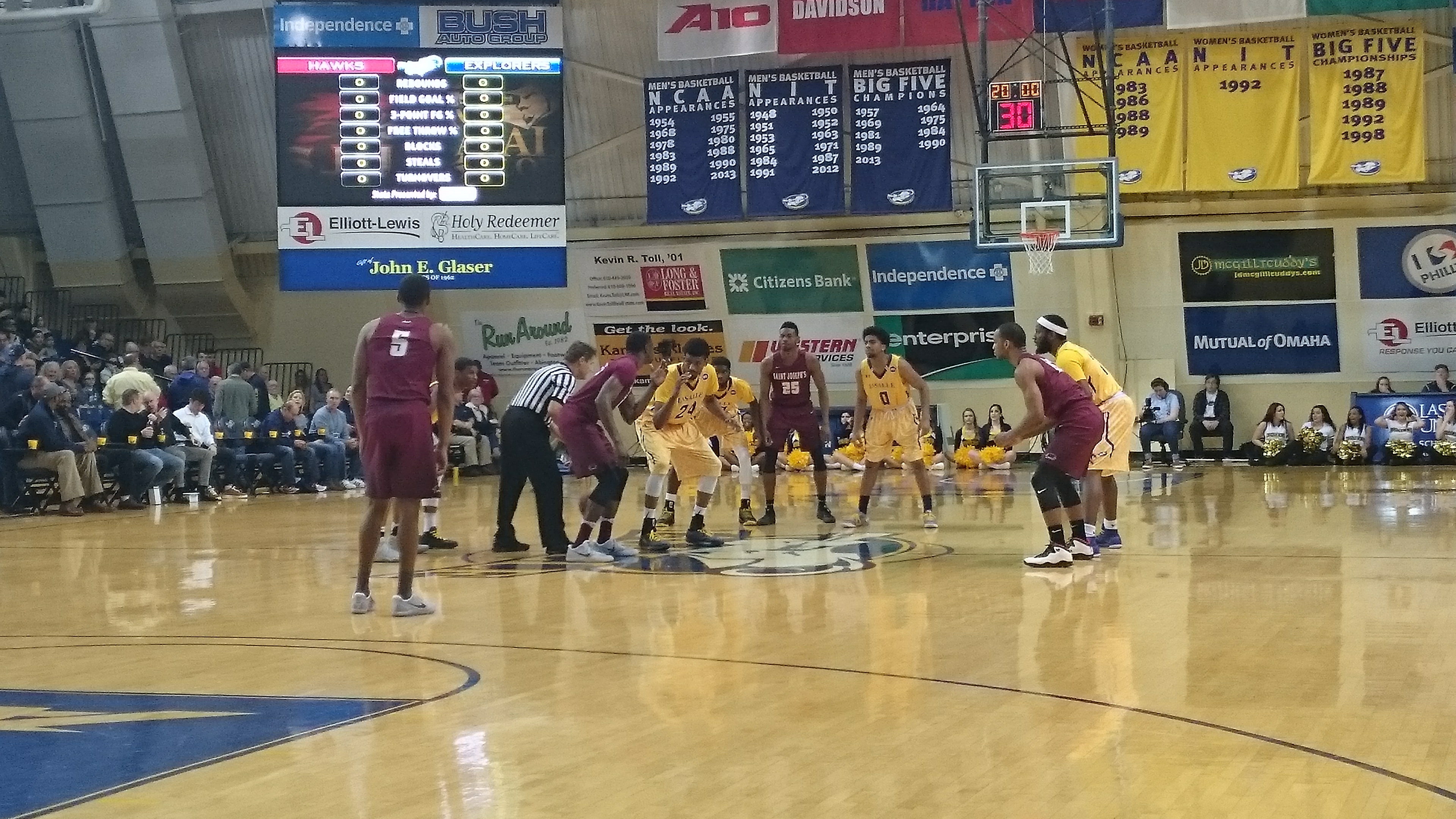 They say revenge is a dish best served cold, but on an unseasonably warm Saturday afternoon in the Philadelphia area, I think the La Salle Explorers would agree it tastes just fine at any temperature.

In the final Big 5 game of the season, the Explorers wanted to avenge a meeting from a few weeks ago when St. Joseph’s won a 73-72 thriller in the closing seconds. This time around, La Salle ensured the outcome would be decided well before the final whistle.

Right from the get-go, the Explorers unleashed a deluge of long range bombs on the undermanned Hawks. Senior Jordan Price (18 points) connected on one of his 5 three-pointers during the game’s opening possession to set the tone immediately. La Salle would knock down their first triples to quickly build a double-digit lead just 3 minutes into the game. By the time the fans were filing out of the arena, the Explorers had hit 12-29 from behind the arc.

Amar Stukes was the poster boy for the Explorers’ hot shooting on the day. Open threes, acrobatic finishes through contact at the rim, the junior guard could do no wrong. Stukes started 5-5 from the field, going 2-2 from three, and 3-3 from the line, scoring all 15 of his points on the game before finally missing a shot right before halftime.

Meanwhile, Phil Martelli’s squad found itself at the opposite end of the spectrum. Playing without their top two leading scorers, Shavar Newkirk and Lamarr Kimble, both out for the season due to injury, the Hawks couldn’t get anything going on the offensive end. It’s a tough task for any team when over 35 ppg is cheering from the end of the bench in street clothes. However, Coach Martelli was not ready to make excuses for his team:

“You keep going, we’re not collecting uniforms yet…We had to walk in here like big boys and we gotta walk out like big boys. It’s the cards that we have and we have to play the hand.”

That hand for St. Joseph’s involved them going 0-6 from three in the first half, finishing just 2-11 on the game. Freshman Charlie Brown particularly struggled early on, missing his first 10 shots from the field, before rebounding in the second half to finish with 13 points on 5-18 shooting. Coach Martelli discussed how his entire team has to become more emotionally mature:

“Charlie Brown is having a wonderful year. But when he misses a shot, any shot, I don’t know if he owns a dog. But if he does own a dog, that dog died 10 times in the first half. Every shot, drops his head, misses his assignment at the other end. You gotta grow up.”

The lone bright spot for the Hawks came after the Explorers led by 27 in the second half, their largest margin of the game. Powered by James Demery (18 points), St. Joseph’s went on a 18-2 run to briefly make it a game. A Chris Clover dunk with under 5 minutes remaining cut the La Salle lead to 71-60, getting the entire Hawks bench, even the injured players, off its feet. Could we see a miracle comeback? Well, no, proving the age-old maxim that if you want to win a basketball game, don’t fall behind by 27 points.

Unfortunately for the Hawks, that win over La Salle a few weeks back was their last win, having lost 6 straight. Judging by today’s performance, things don’t portend to be getting better any time soon.

As for La Salle, the Explorers now find themselves one game back of the crucial 4th position in the A-10 standings. Head Coach John Giannini discussed the team’s postseason aspirations and just how important that positioning is for his team:

“We’re very concerned about our seeding. You look at the standings and what you have to do in the next game. Then, after that, you do the process over. [Top 4] is a big deal.”

Every game counts in a crowded middle of the conference pack, but avenging a recent loss to a Big 5 rival? Maybe that one counts a little more.