<![CDATA[Combine Madness has simmered down, but the Free Agent Okay-to-Tamper Period has begun…in fact, Brandon Marshall has already signed a 2-year deal with the Giants, and Pierre Garcon is reportedly now a 49er.  Just to catch up, the Eagles are reportedly angling for FA cornerbacks—

According to Eliot Shorr-Parks of NJ.com, the Eagles are interested in Houston Texans cornerback A.J. Bouye. Shorr-Parks also mentioned that the Eagles and Bouye’s agent have spoken to each other, since the legal tampering period opened up at noon on Tuesday.

The 25-year old cornerback had a breakout season in 2016. Bouye posted career-highs in tackles (62) and pass deflections (16). He also had an interception and a sack on the season. Bouye could fill an automatic need for the Eagles as he would be their day one starter if signed.

Bouye could prove to be too expensive based upon the Eagles’ limited salary cap space. All of the hypothetical offers for Bouye have averaged at least $12 million annually.

The 2013 undrafted free agent played sparingly during his rookie season, but he established himself as one of the team’s most reliable corners over the past three seasons. Pro Football Rumors listed Bouye above Logan Ryan as the best available free agent cornerback. Meanwhile, Zach Links of PFR anticipates that the 25-year-old will be the highest-earning free agent this offseason.

The Eagles have parted ways with starter Leodis McKelvin and Nolan Carroll could go elsewhere this month. Bouye would represent a major upgrade to Philly’s defense.

Janoris Jenkins‘ deal from last year has been mentioned as a comp for Bouye. He inked a five-year, $62.5 million contract with the Giants which included a staggering $28.8MM fully guaranteed. Bouye is younger than Jenkins was at the time of signing and the cap is higher than last year, so it’s entirely possible he could match.

Bouye has only missed four games over the past three seasons.

Zach Links of PFR: “Bouye is an overnight sensation, going from unknown to elite talent in the blink of an eye. No one knows exactly what to make of Bouye, but his upside is too much for teams to pass up. The Texans declined to use the franchise tag on the 25-year-old (26 in August), but they’re still hoping to get a deal done this week. The Jets are said to have interest, but it’s not clear if they’ll have the room to get something done. Cornerback-needy teams like the Panthers, Saints, Jaguars, Titans, Bears, and Eagles can be expected to at least kick the tires on this year’s top player in the secondary.”

In case you’re wondering, here are the “Top Free Agent” DL listings available to the Eagles based upon PFR’s rankings of the defensive line guys:

Then there’s the PFR ranking of the Top 50 overall position free agents: 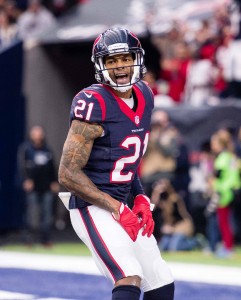