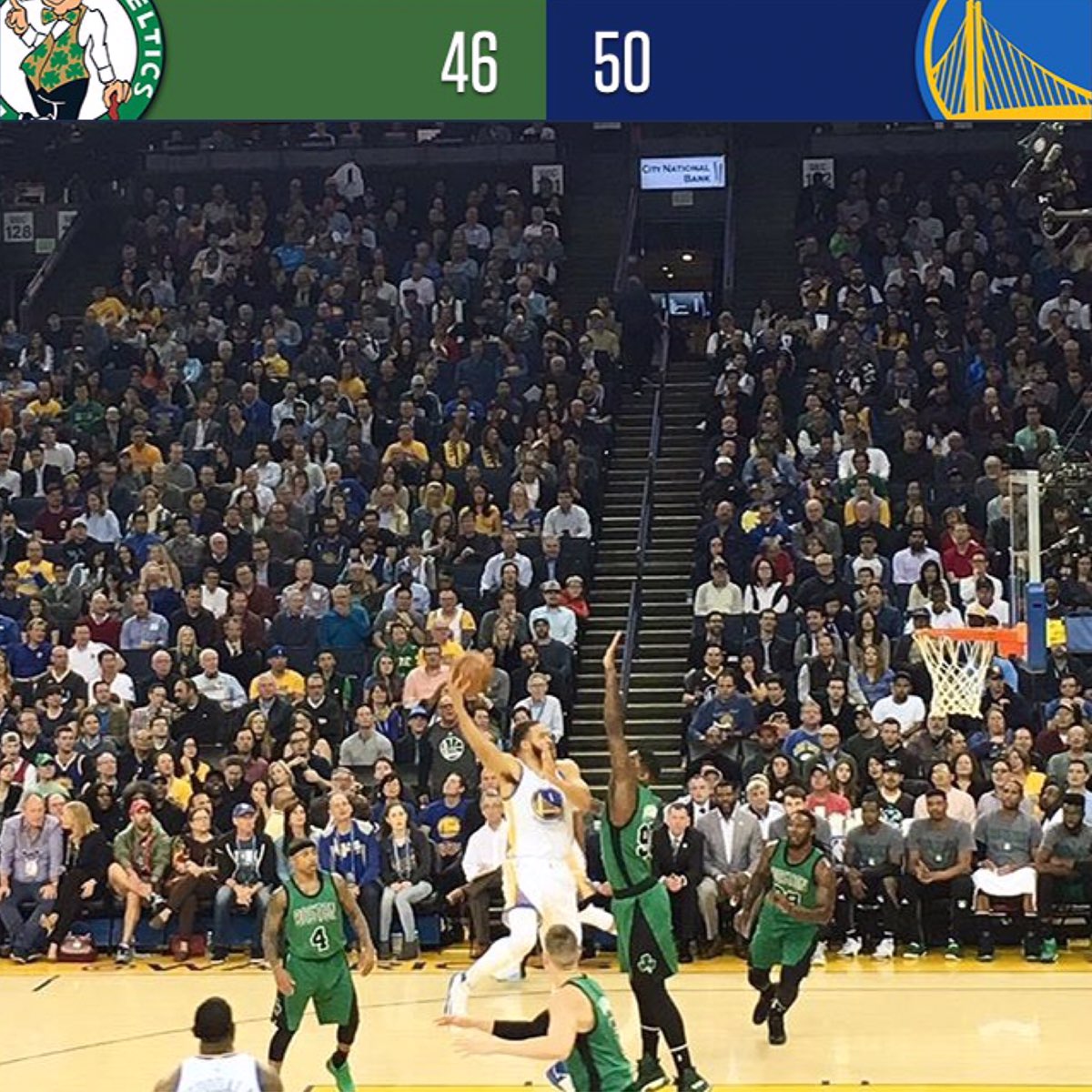 Two nights after besting the Hawks on the road, the Golden State Warriors (52-11) returned home to face the current No. 2 seed in the East, the Boston Celtics (40-24).

Klay Thompson ended a mini-drought for both teams with a jumper, then a three…

…which was his 200th of the season, giving him five straight seasons doing so, then another bucket in the lane…

…but Draymond Green smoked a layup which led to a run-out for the Celtics.

Stephen Curry and Isaiah Thomas both traded three free throws apiece, drawing fouls beyond the arc, then Curry drove in, made a fake pass and finished with an exquisite lefty reverse that trickled in:

Steph added a dribble-and-pop three, going from the top to the left wing…

…but the Celtics hung tough as Avery Bradley made an impressive jumper and Thomas made an even more impressive trey to keep things close, with the Warriors ahead, 15-12, with 5:03 remaining before Steve Kerr called the first timeout for Golden State.

Out of the timeout, JaVale McGee tapped out a missed corner three by Green, then late in the shotclock, made an improbable running righty hook off the board:

Curry added a putback of a missed layup by McGee, dished initially by Andre Iguodala with a fancy behind-the-back pass, Patrick McCaw added a drive lefty, and Iguodala swished a catch-and-shoot from the left arc.

But Jonas Jerebko came off the bench for Boston and drilled a jumper followed by a catch-and-splash, with Matt Barnes, who came in to a nice hand from #Roaracle…

…answering with a nice bunny lob inside to JaVale for two more.

Iguodala made a nice pump-fake reverse layup, and Golden State took a 28-25 lead into the second stanza.

Iguodala hit an open jumper to start the second frame, followed by an inside bucket by Draymond…

…and, later, Klay added another jumper in the face of Marcus Smart…

…but Thompson made a bad pass to David West, then Al Horford made an and-one from the post on a runner against Draymond.

Hitting the free throw after Kerr called timeout, the Celtics evened the score at 34-34.

Klay curled around for a catch-and-bury “J”, but Smart then Bradley tightened the clamps on Thompson and the Warriors committed a shot clock violation, then Klay got stripped by Bradley, although Shaun Livingston made up for it with a nice block on Horford.

Livingston later made a great close-out on a Jae Crowder jumper, leading to a run-out righty scoop by McCaw, who turned on the jets to finish the break:

Kelly Olynyk struck back with a catch-and-shoot trey from the left arc, Curry threw the ball away on a lefty sling pass inside, but Matt Barnes did well to hustle back and swat away the fast break by Bradley:

Amir Johnson ended up scoring on a nifty up-and-under with the lefty, but Steph came back with a crazy scoop play drawing contact, with no foul to his dismay, and Olynyk accidentally tipped the ball in, the bucket credited to Curry:

Kerr got Iguodala a dunk assisted by Curry on the “ATO” (after-timeout) play and, a couple possessions later, Klay blocked a Bradley drive, then was rewarded with a layup at the other end after a skip pass, with the assist to McCaw:

Smart bricked a trey attempt from the left arc, and Curry threw a touchdown pass to Green for a two-hand smash…

Out of the timeout, Bradley hit the side of the board on a corner three, leading to a shot clock violation, and Green tapped a missed three by Klay to Curry, then cut to the hole and dropped in a floater fed by Steph, with 30 seconds to play.

Smart smoked an open lefty layup, although the Warriors blew an assignment on the play…

…Kerr called a twenty-second timeout, and Draymond ended up having a trey from the top rattle in and out.

The Warriors took a 50-46 lead into halftime.