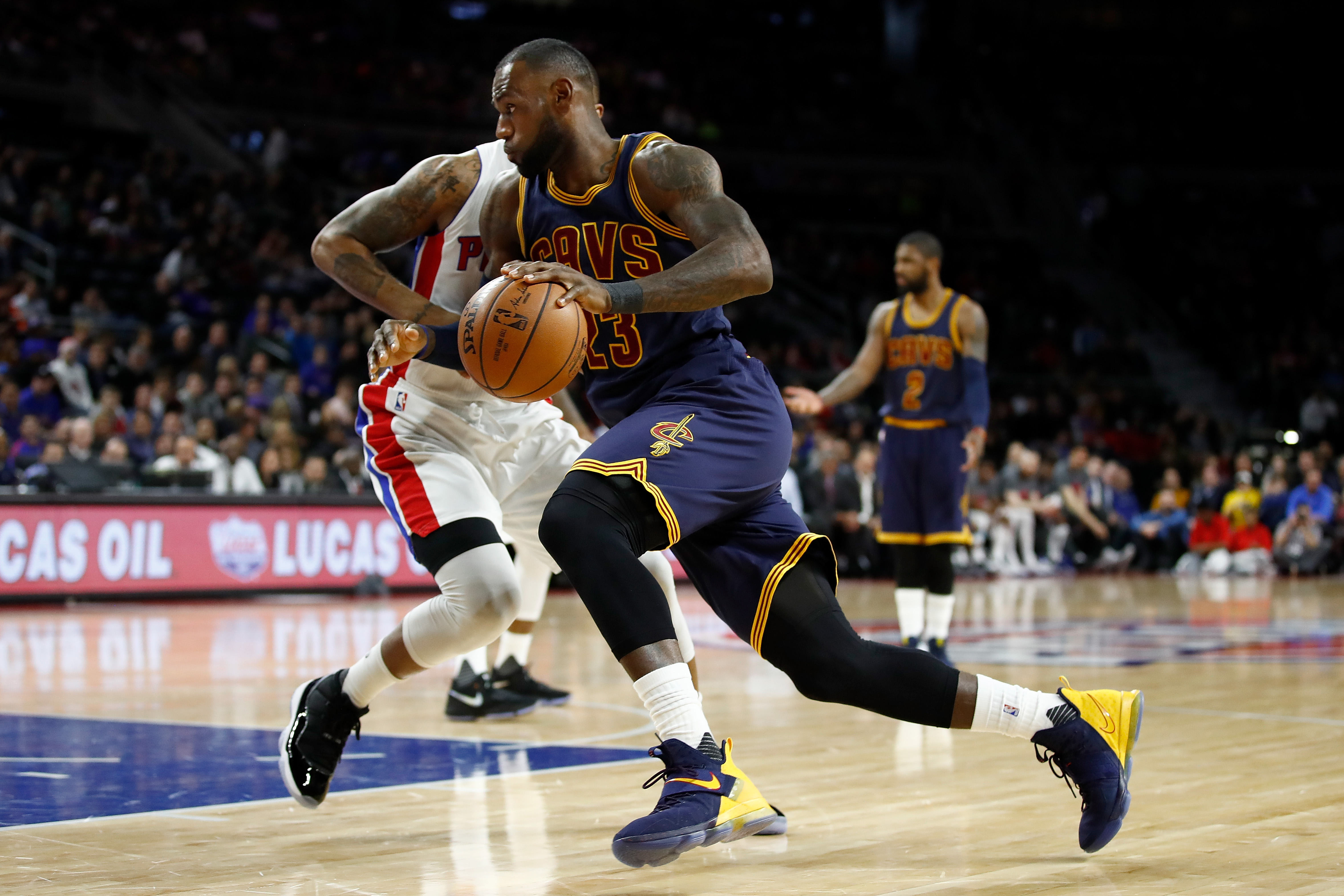 The Cavs took on the Pistons on Thursday night at the Palace at Auburn Hills. The team welcomed back JR Smith, but they were still not at full strength as Kevin Love is working his way back from knee surgery. Kyle Korver also missed the game with a sore knee. Cleveland got a triple double from LeBron and 27 points from Kyrie Irving, but it wasn’t enough to beat a mediocre Pistons team in Smith’s return.

The game quickly picked up steam after a relatively slow start. Neither team could score much to begin the game, but the Pistons held a slight edge early in the contest. Then Kyrie and LeBron took over the game in the middle of the first quarter. The Cavs went on a big run to take a 27-12 lead with a few minutes to go in the opening period of action.

Kyrie started to take the ball one-one-one and slice through the Pistons defense for seemingly effortless floaters and twisting layups. He scored 11 in the quarter and would have had two more points, but he let a toe touch out of bounds on a baseline drive for an acrobatic layup that didn’t count. LeBron moved well off the ball and cut for a few high-flying slams. One of them ended in a technical for hanging on the rim too long.

The Pistons finished the quarter strong and closed the gap to 29-22. The Pistons continued to stay pretty hot and outscored the Cavs 33-23 in the second quarter to take a 55-52 lead at the half. They got 12 from Kentavious Caldwell-Pope and 10 from Marcus Morris in the first half, but the big surprise was reserve point guard Ish Smith coming off the bench to score 11 points in 11 minutes on 5-6 shooting from the field.

The Cavs didn’t get much going in the quarter as the highlight was a 4-point play from Kyrie who was fouled hitting a three-pointer in the corner with the shot clock winding down. JR Smith looked rusty coming back from a broken thumb and only shot 1-9 for the game, but he did hit one of his patented fall-away contested threes. LeBron and Kyrie both had 19 at the half, but no one else on the Cavs had more than 5.

The Cavs continued their cold streak with a sluggish start to the third quarter. The Pistons led most of the way until Channing Frye hit 3 straights three pointers in less than a minute to give the Cavs there first lead of the quarter with 4:41 to play. Richard Jefferson then followed it up with a monster slam. Frye then followed up rim-rattling dunk by LeBron with another three with about a minute to play in the third as the Cavs finally got some help from their bench. The Cavs took an 80-73 lead into the final quarter by outscoring the Pistons 28-18 in the period.

The Pistons then started the fourth on a 13-0 run before Deron Williams hit a three to cut the score to 86-83 as LeBron watched from the bench. It was pretty back and forth the rest of the way with the Pistons holding leads of up to eight and the Cavs closing it to within three when LeBron drove to the hoop for what looked to be a three-point chance. However, no foul was called, and Reggie Jackson hit a contested shot on the other end to answer and give the Pistons a 103-98 lead with 55 seconds left. Jackson was able to hit a couple of free throws in the closing seconds to seal the 106-101 win for the Pistons.

Ultimately, the Cavs could not get stops down the stretch and outside of Channing Frye, (15 points on 5-7 from deep) they did not get much help for LeBron and Kyrie. LeBron had a final stat line of 29 points, 13 rebounds, and 10 assists for his eighth triple-double of the year, but the Cavs were outscored by 23 points in the 9 minutes he was on the bench.

The Cavs had no answer for Andre Drummond as he scored 20 points and grabbed 16 boards. He repeatedly kept possessions alive down the stretch by grabbing offensive boards that ended up leading to second chance points by Detroit. This highlighted the fact that the Cavs are still in need of a rim-protector after losing Andrew Bogut 58 seconds into his Cavs debut. They need to find someone who can help solidify the interior of the defense and keep the opposition from having high-scoring quarters.

The Cavs gave up 33 points in both the second and fourth quarters tonight, and it cost them the game. At a critical part in the season, the Cavs look like they are taking a step back instead of forward. After a very promising February, they are 1-4 to begin March. The Cavs will look to rebound as they face the Orlando Magic on Saturday.