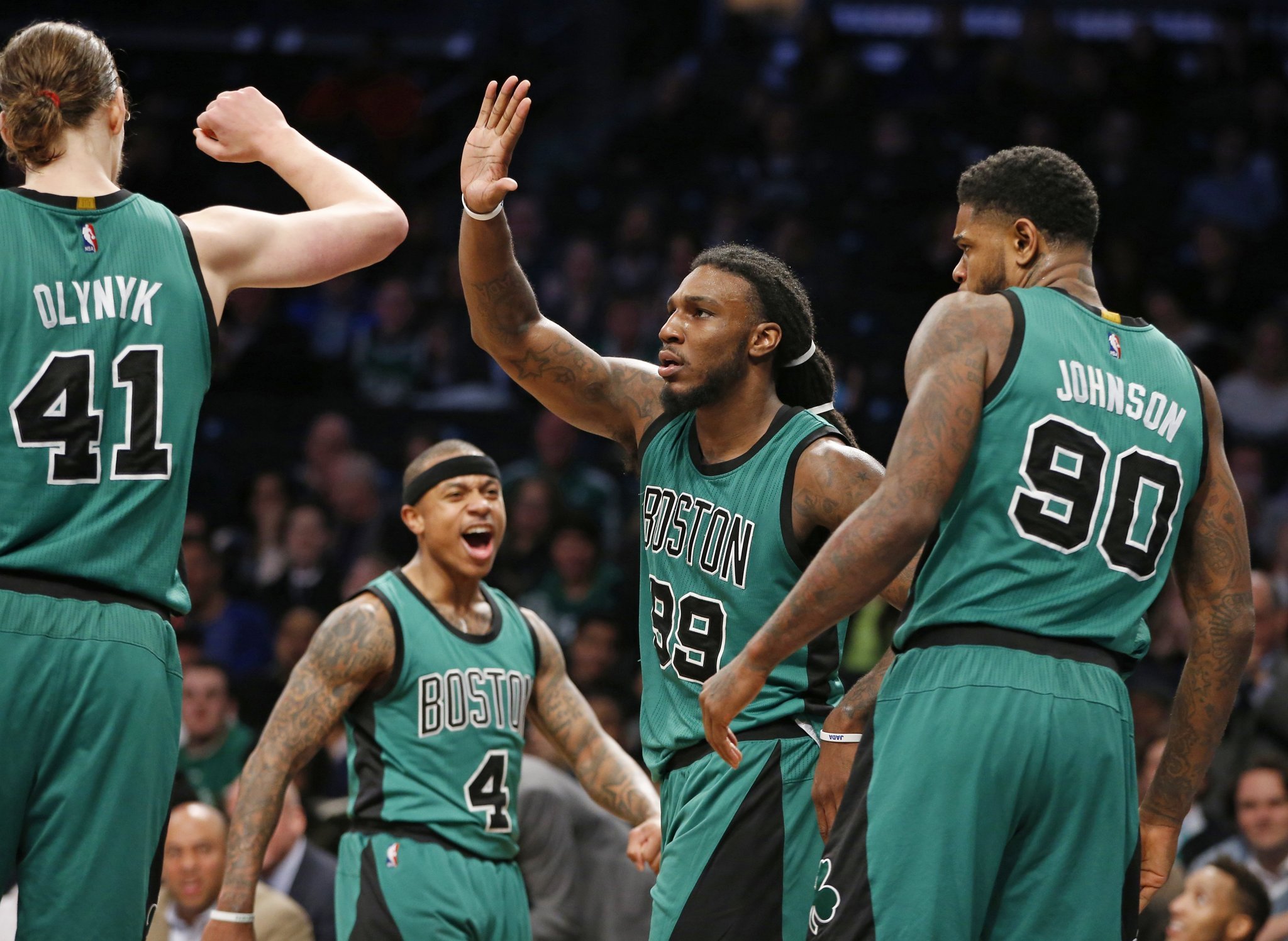 For the second straight year, the Celtics defeat the Warriors at Oracle Arena. The 99-86 victory was punctuated by their suffocating fourth quarter defense. The Warriors were ahead 79-78 with seven minutes remaining but never again saw a lead, as the Celtics closed the game on a 21-7 run. Boston responded nicely after a two game skid and improved its record to 41-24.

Klay Thompson’s sharp shooting gave Golden State an early 15-7 lead. Isaiah Thomas countered with 11 first quarter points. After two days of criticism following his comments about the coaching staff, Thomas was in attack mode from the start. Jerebko and Rozier each hit threes at the end of the quarter, and the Celtics trailed 25-28 after 12 minutes.

The bench continued to play well into the second quarter. They led 45-40 at the 4:00 mark after an uncharacteristically athletic layup by Amir Johnson. But that was their last field goal of the half. Whenever the Celtics had an effective string of possessions, the Warriors were quick to respond. Golden State closed the quarter on a 10-1 run and led 50-46 at halftime.

The Celtics passing was crisp throughout the first half, as their 18 field goals came on 15 assists. Kelly Olynyk has seemingly figured out the Warriors, evidenced by his nine second quarter points on 4/4 shooting. Last season during the first matchup (a double OT loss in Boston), he scored 28 points and made several clutch buckets. But the Warriors bigs had their way through most of the first half, registering 9 blocks, 30 points in the paint, and 6 offensive rebounds.

Isaiah sunk a contested three from the corner to tie the game at 58 midway through the third, but Thompson immediately responded, hitting back-to-back jumpers and giving Golden State a 63-58 lead. A Steph Curry buzzer-beating three made it 74-72 going into the final period — he talked some trash to Jaylen Brown after making the shot (video below).

The scoring cooled off during the first part of the 4th quarter. Andre Igoudala made an amazing cross-court bounce pass leading to a Draymond dunk, igniting the Oracle Arena crowd. But the Celtics responded by playing their best basketball of the night. A nifty Olynyk fake gave him an open lane for a dunk, the first bucket of a 15-0 run. Crowder hit back-to-back threes, the Celtics defense forced consecutive turnovers, and with 4:00 remaining, Isaiah drilled a pull-up three to put Boston ahead 93-79.

This was when the Warriors could have mounted a comeback, but Boston’s swarming defense forced eight turnovers in the quarter. With two minutes on the clock, the Celtics got offensive rebounds on consecutive missed shots that eventually led to a Bradley midrange jumper, effectively sealing the victory for the C’s.

The Warriors scored only 12 points in the fourth period. They shot 6/30 (20 percent) from deep for the game, their second lowest percentage all season. In scoring 86 points, the Warriors failed to reach 100 points at home for the first time in 56 games. It’s also the second fewest points Boston has allowed this season. It was a tremendous effort for the Celtics after two difficult losses. They beat the NBA’s best team on their home court for the second straight season. Hopefully, they carry this momentum to Friday’s matchup against Denver.

Not the best sequence for Jaylen Brown…

JB could find himself on an upcoming edition of #shaqtin 😭#celtics pic.twitter.com/N4mCgfdZio

And here, Steph puts the rookie in his place, hitting a three and letting Jaylen know about it. This was, however, Curry’s last basket of the game.

Contested three from the left corner, in Klay’s face, no problem.

The cigar goes to… Brad Stevens. This was arguably his best coached game of the season — a tremendous response after that unnecessary “drama” and “internal turmoil” following the Clippers game. He brilliantly managed the rotation. Check out the minute totals for each player:

I cannot imagine a more ideal distribution of minutes. The Celtics won every lose ball and played hard for 48 minutes. They forced Warriors role players to hit shots, prevented the splash brothers from scoring a fourth quarter field goal, and limited the effectiveness of Draymond Green. Throughout the ebbs and flows of the game, they stuck to the plan and gritted out a victory. Everyone deserves credit, but the focus, preparation, and attention to detail all starts with Brad.

•Warriors had more turnovers (8) than baskets (5) in the final period… they also blew a 3-1 lead in the finals last year (sorry, I had to)