Under the Lens: Leonard's End of Game Heroics vs Rockets 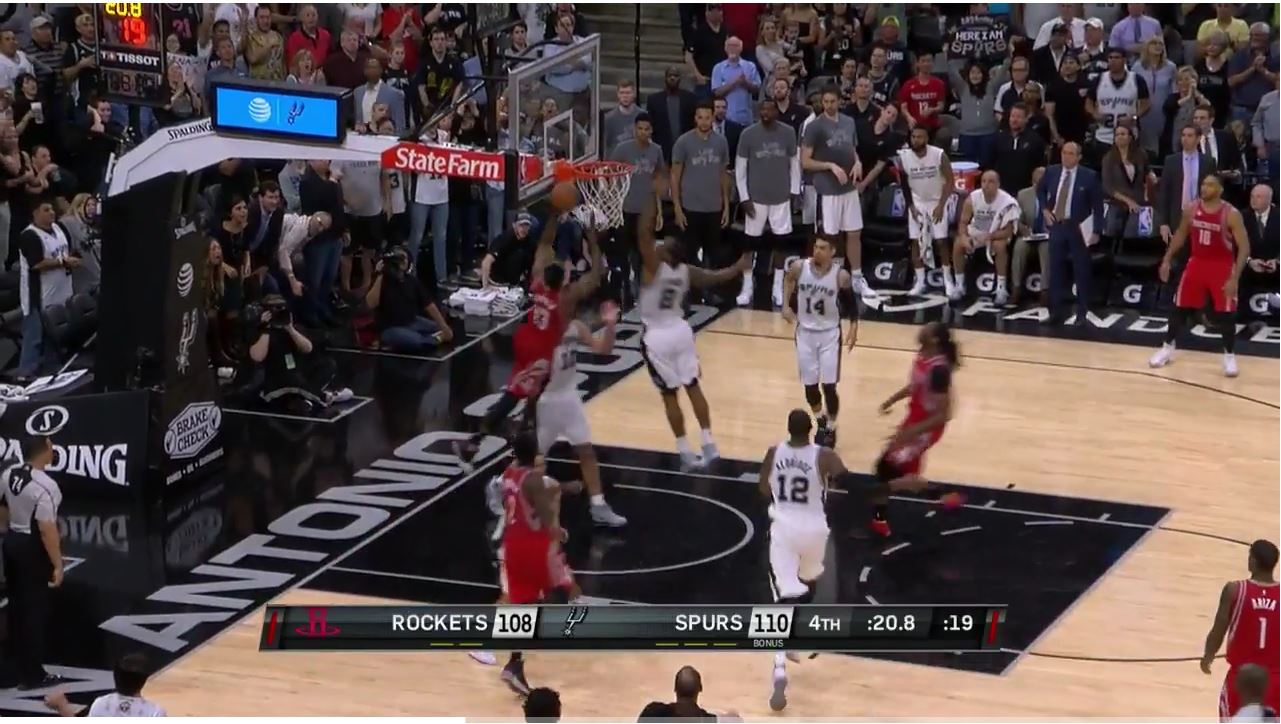 Under the Lens: Leonard's End of Game Heroics vs Rockets

With a little over 30 seconds left in Monday night’s match up with the Houston Rockets, James Harden hit a free throw to put the Rockets up by one. The San Antonio Spurs seemed to just eek out the previous three wins and found themselves in a close game once again. Similar to the previous three games, Kawhi Leonard was able to make the plays down the stretch needed to seal a win for the Spurs with two particularly huge plays to not only put the Spurs ahead, but give them a bit of breathing room to close out the game.

Aldridge sets the screen for Leonard near the top of the key. Nene then switches onto Leonard. Nene begins to lunge to the right to stay in front of the drive just as Leonard makes his move towards the perimeter. Beverley begins to move even further away from Parker to ensure that a rolling Aldridge doesn’t have an open path to the basket. While Gordon is not particularly close to Green in this frame, Leonard is far enough away that if he were to pass to Green, Gordon would have time to recover.

From there, Aldridge rolls to the basket,  pulling Ariza away from Leonard. Gordon is in position to help if Leonard drives, but doesn’t over commit as that would leave Green open on the perimeter. Beverley is cheating far off of Parker at this point. However, it would be difficult for Leonard to make the pass to Parker as there are two defenders between them.

When Leonard pulled up for his shot, Nene was not directly in front of him. Rather, he was attempting to cut off Leonard’s driving lane to the basket. When Leonard did take the shot, Nene scrambled to contest, but was too far back and to the right to meaningfully deter the shot. By the time he reached Leonard, the shot was well into the air. Gordon still refuses to cheat too far off of Green. While he is close to Leonard, he is completely focused on Green and hasn’t yet noticed Leonard’s shot attempt. Shortly after this frame, Beverley boxes out Aldridge, but Aldridge fights around him and gets good position before the ball goes through the hoop. If Leonard were to miss and Aldridge were to grab the offensive rebound, he would have had an easy put back or would have likely found Parker in the corner for a wide-open three. Leonard, however, does not miss. The Spurs went up by two.

Despite having two timeouts left, the Rockets don’t call one, hoping that they can run their offense before the Spurs’ defense has time to get set. Leonard picks up Harden early, but Nene sets a screen for Harden just past half court. The only other Spurs above the perimeter are Aldridge and Lee.

While the Rockets helped off of the perimeter to prevent an easy drive to the hoop, the Spurs stay relatively close to each of the Rocket’s perimeter players, even on the weak side. While this means that they do not concede an open three when they are up by two, the only player between Harden and the basket is Lee, a match up Harden will gladly take.

Comparing the last frame to this one is pretty incredible. In a mere 1.2 seconds, Leonard is able to cut the space between Harden and himself and put himself in position to make the huge block. Lee deserves a lot of credit as well, as he was able to legally contest Harden long enough to allow Leonard to get back into the play. With Harden at the hoop, the Spurs have all but abandoned Gordon and Ariza on the perimeter.

After Leonard made the block, Nene rebounded the ball. Green, Aldridge, and Leonard were all in good position to contest, but Aldridge ultimately came up with the block before Leonard secured the ball. It seems Nene did not notice that he had an open passing lane to a wide open Ariza on the perimeter, but he had caught the ball a bit off-balance and tried to put it back himself instead before Aldridge made a solid defensive play, putting the Spurs in position to win their eighth in a row.

As he has been doing all season, Leonard was able to make big plays when the Spurs needed him the most. Leonard always seems to bring something special to the bigger games, such as this one and the match up with the Cleveland Cavaliers in January. As the post-season draws near, Leonard continues to build his case as one of the league’s best players and an MVP candidate, while possessions like these are becoming more and more common.

Stats and clips obtained from stats.nba.com