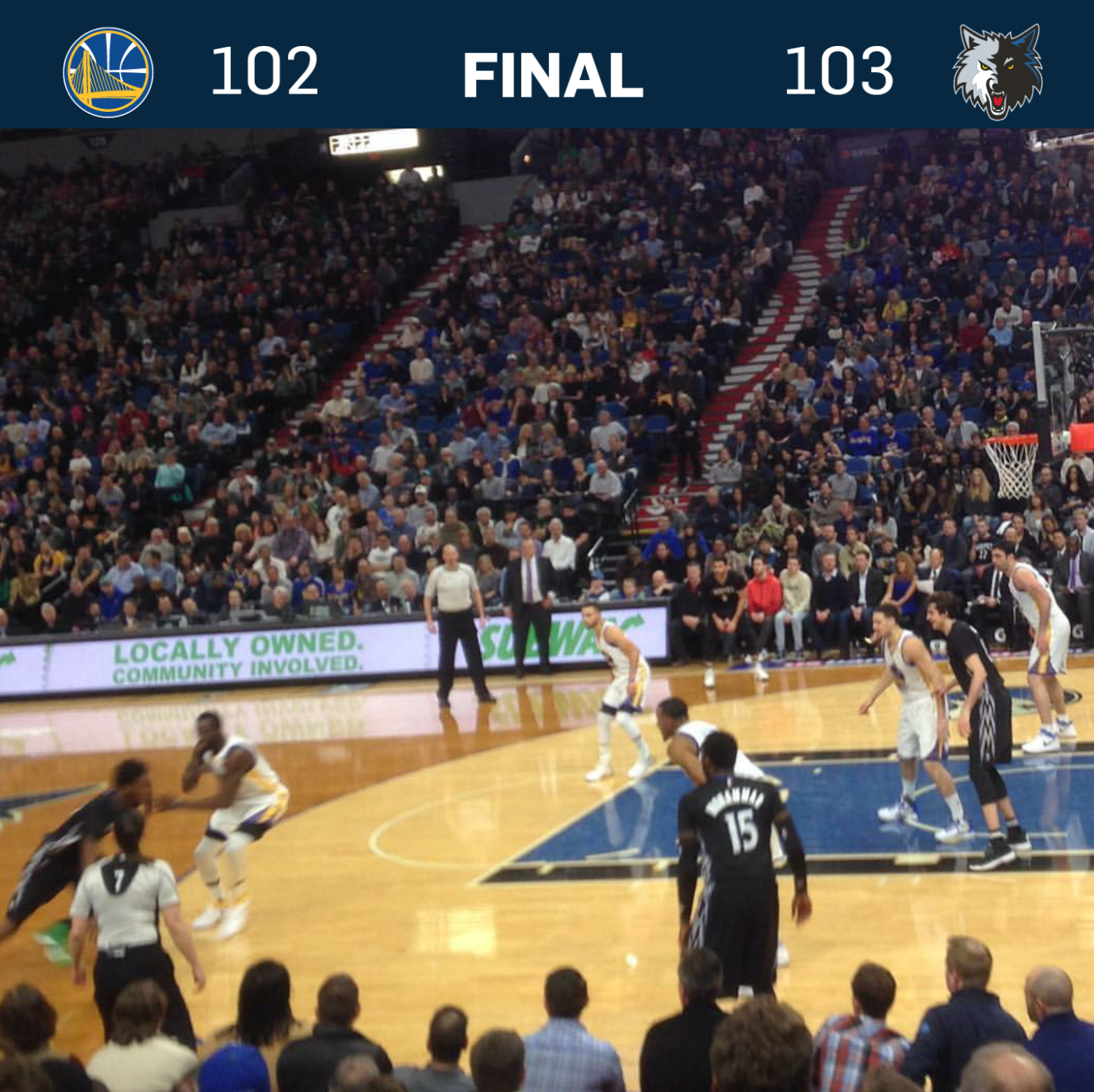 This is a continuation of the halftime recap of the Golden State Warriors at the Minnesota Timberwolves.

The Timberwolves held a 62-53 halftime lead.

…the Warriors got off to a rocky start.

Karl-Anthony Towns buried a fade-away on the left baseline isolated against Draymond Green, Andrew Wiggins dissected the Warriors’ defense for a jump-stop layup, Ricky Rubio swished a jumper, and Gorgui Dieng scored inside on a feed by Rubio.

But Patrick McCaw got a cross-court pass from Pachulia, made an upfake, and scored on an attack of the rim, Thompson hit a long two after upfaking Wiggins, and with 9:12 remaining, the Wolves held a 70-59 lead.

…and later Pachulia stole the ball from Towns, then Steph ran pick-and-roll with Pachulia and finally splashed a triple from the top off the dribble…

The Warriors pulled to within one possession as Klay hit a jumper, Zaza got another steal, saving Draymond’s outlet turnover by breaking up a lob to Towns, and Thompson got another bucket, showing the ball for a fake before shooting in the lane:

But despite good hustle by Green and Curry, crashing the boards after Thompson missed a heat-check three in transition, Steph couldn’t bury a three from the right corner after Draymond beasted an o-reb, and Wiggins ended up pulling up on the next sequence from the top.

Curry threw a touchdown pass to Pachulia, but it got deflected off Zaza, and Brandon Rush fed Wiggins on the break for an uncontested dunk, spoiling the mini-comeback and forcing Warriors head coach Steve Kerr to call timeout as the Wolves went back up, 76-68, with 4:53 to play.

Matt Barnes came in and promptly hit a catch-and-shoot trey from the top, assisted by an attacking Steph, then JaVale McGee blocked Dieng once more, this time from behind on a dunk attempt, but Klay turned the ball over on a bad pass, Wiggins drew free throws on an attack, then stepped past both Barnes and McGee on a layup after spinning on the post-up.

Curry went coast-to-coast for a layup after a drive with no call followed by a Shabazz Muhammad missed three, Andre Iguodala went right baseline for a two-hand jam off a zing pass from Barnes…

…Dieng scored an and-one after JaVale lunged out at him at the three-point line and Steph helped out, trying to draw the charge.

Barnes made an upfake from the arc up top with the quarter winding down and scooped a layup at the buzzer, but replay review showed it came after the horn and the Wolves held an 88-76 lead heading into the final frame.

After a Towns bucket, Thompson drew a foul and scored two free throws, then hit a triple from the left corner delivered by Ian Clark.

Towns missed an attack, then Clark hit a three after a baseline inbound went to Green and Ian wheeled around a screen.

The Warriors forced a late shot by poor shooter Kris Dunn, but Klay decided to shoot a three over the smaller Jones instead of posting him up, missed, but was saved by Clark who stole a pass from Dunn and fed Iguodala for a soaring jam:

Golden State clamped down on their defense, David West pulled down two rebounds, and Thompson ended up hitting another triple assisted by Iguodala, cutting the deficit to 90-89, and giving Klay 30 points on the night:

But West inexplicably fouled Rubio iso’ed on the left side, although West thought it was a phantom foul, and after Clark rushed a shot and missed, Muhammad came back with a layup in transition, forcing Kerr to call timeout as Minnesota stretched their lead back out to 94-89 with 6:39 to play.

Later, Steph bricked a three badly, making him 1-for-8 from downtown for the night, but McCaw eventually stole the ball inside from Wiggins, leading to a break, and Curry fed him with a nice bounce pass.

A couple possessions later, McCaw found Steph in transition again after a miss from Towns, but Wiggins put back an airball by Towns and with 3:34 to go, the Wolves still led, 98-94.

Draymond drew a foul but only hit one free throw, then Towns drew the fourth personal on Zaza, missed the first, missed the second, but Pachulia inexplicably tried to save the ball after boxing out Bjelica and getting the ball tapped by him.

That gave the Wolves the inbound, but Green blocked another attack from Wiggins, Minnesota got the ball back, then Towns slipped and Draymond got another steal, which led to Curry up-faking from the left arc, drawing three fouls (finally!) before Kerr took a timeout to rest his troops with 2:38 left.

Out of the timeout, Steph hit all three from the charity stripe to even the score at 98-98, but Wiggins came back with a drive, layup, and-one versus Green, giving the Wolves a 101-98 lead with 2:27 remaining.

Rubio drove in, but Klay knocked the ball away out of bounds, Thibodeau took a timeout with shot clock at 4.8, Wiggins shot an airball on the inbound play, Bjelica missed a tip-in, and the Warriors got the rebound.

But Thompson missed an open jumper created by ball movement with Draymond, Rubio came back with a late-shotclock three-point shank, and the ball caromed off towards halfcourt.

Klay couldn’t come up with it as Towns lumbered down, Steph dove, but so did Rubio, and the Wolves came up with the ball with Rubio on top of Curry during the scramble.

With 51 ticks to go, Wiggins shot a dribble-and-pop and a phantom call was made on Pachulia, but Wiggins missed both free throws and Thompson grabbed the second miss and called timeout, with Green and Iguodala going all-out for the rebound.

Kerr called timeout and, with 19.7 seconds remaining, Curry up-faked, missed a jumper, Iguodala got the offensive rebound, and Steph went with another up-fake to create a floater down the lane, which gave the Warriors a 102-101 lead:

But with 12.8 seconds to play, Wiggins drove again, drew another foul on Pachulia, fouling him out, although replays showed that Zaza appeared to have a clean block.

Kerr inserted West, Wiggins made both free throws, Steph took a contested shot that went in-and-out, and Brandon Rush got the rebound, with Klay wrapping his arms around him.

The buzzer sounded, but head referee Ken Mauer put 0.7 seconds back on the ball, ruling the call a jump ball.

With the clock starting on the tip, which was won by Thompson, the ball got tipped too far back and the horn went off once again, without any catch by the Warriors.