HALFTIME RECAP WITH HIGHLIGHTS: Warriors Shoot 2/10 on 3s, Give Up 19 Points To Towns, Trail Minnesota Timberwolves 62-53 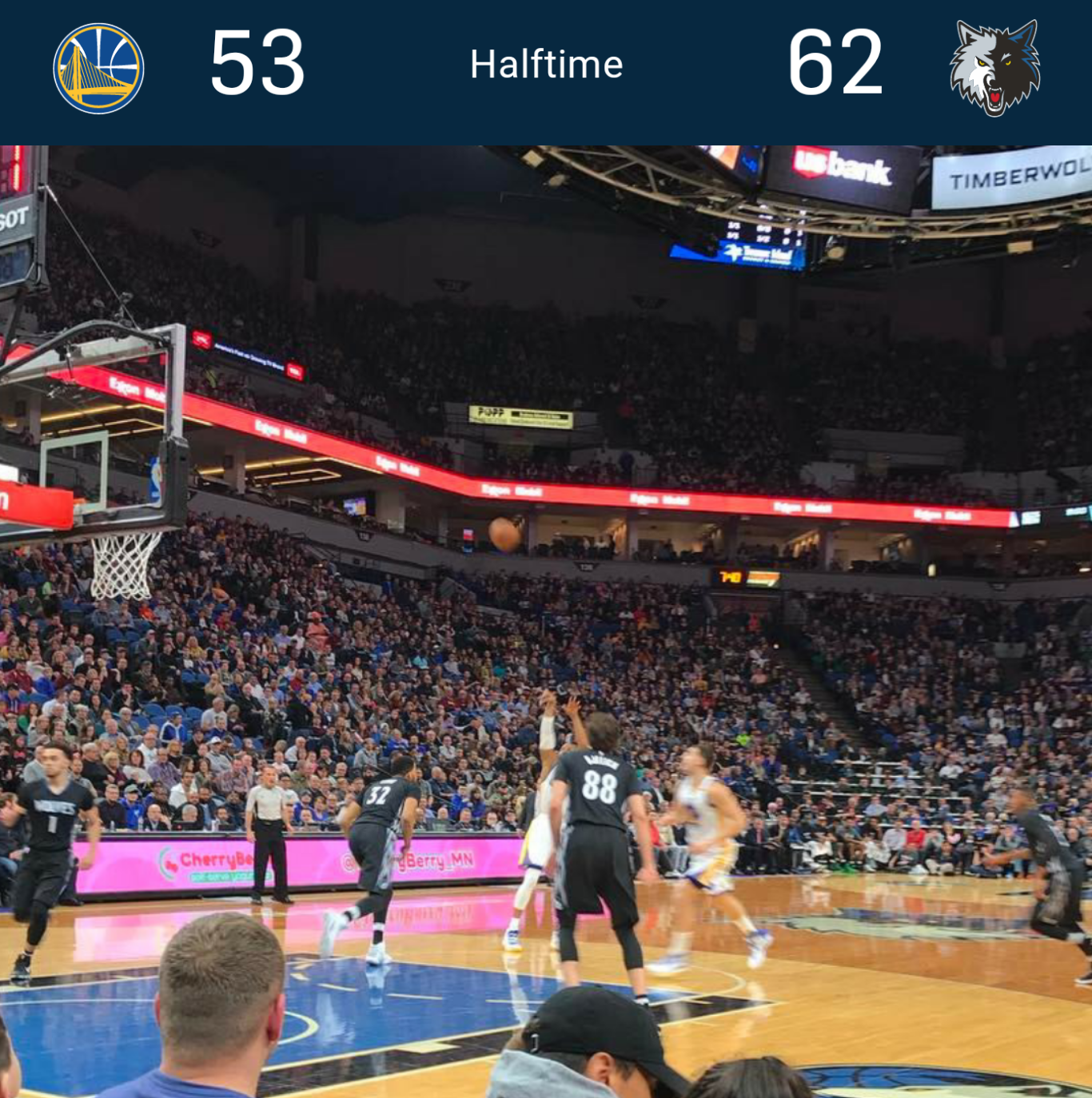 HALFTIME RECAP WITH HIGHLIGHTS: Warriors Shoot 2/10 on 3s, Give Up 19 Points To Towns, Trail Minnesota Timberwolves 62-53

Two nights after succumbing to the Celtics at home, the Golden State Warriors (52-12) headed back on the road for a back-to-back, starting with the Minnesota Timberwolves (26-37).

Q1: Too Many Turnovers

Klay Thompson got off to a hot start, although he missed his first trey, draining two dribble-and-pops from the right wing, one enabled by a Zaza Pachulia pick.

After Stephen Curry and Brandon Rush, who got the surprise start over Shabazz Muhammad, traded missed threes, Thompson attacked the paint and delivered a pass inside to Pachulia for an easy two.

Patrick McCaw then found Klay at the top, pivoting for a three, but Karl-Anthony Towns answered back with his own triple, only to get answered by another Thompson bucket, this time off an inbound from Curry after Zaza got fouled down low.

Meanwhile, Draymond Green collected two steals, but threw a pass just behind Steph that Ricky Rubio managed to slap off of Curry’s leg for a turnover.

Gorgui Dieng hit a jumper, and Towns got an inside banker, so the Timberwolves kept things close, trailing just 13-11 with 6:50 remaining as head coach Tom Thibodeau called timeout after not liking the defense on the Steph-to-Klay inbound basket.

But out of the timeout, Towns tapped in a miss by Andrew Wiggins, hit a jumper, and Dieng got an and-one as he was grabbed inside by Green and McCaw goal-tended the reverse layup off the board, and Rubio hit an improbable jumper after Curry scored on an assist by Draymond.

Warriors head coach Steve Kerr took a timeout as the Timberwolves moved ahead, 20-15, with 5:03 to play.

Out of the timeout, Steph still couldn’t find a three to drop, but JaVale McGee volleyball-spiked a Dieng move…

…but Kevon Looney came in and threw a bad lob pass to McGee, Curry dribbled into traffic and lost the ball, leading to a Rush tip-in of Rubio’s missed layup, and JaVale threw a bad zing pass to Andre Iguodala from the top, at a poor angle, for the team’s fifth turnover of the quarter.

Nemanja Bjelica rose up for a dunk, got fouled by McGee, JaVale came back with a putback smash…

…then Rubio drew two free throws against Steph, and the Wolves had a 30-20 lead before Curry weaved the left side for a nifty scoop.

Rubio drew more free throws, this time on Matt Barnes, but JaVale swatted another Dieng attempt after he thought he was free spinning on Barnes:

However, Wiggins banked a bucket over McGee on a drive at the shot clock buzzer.

Steph came back with a finger roll just before the quarter horn, even though Rubio tried to foul him on purpose twice during the drive with no call, to stop the action, and Minnesota held a 34-24 lead heading into the second stanza.

Ian Clark started the second period and got off to a nice start, getting a defensive rebound, bringing the ball up, probing, and attacking for a lefty layup, then hitting a three after Klay made a good hustle play on an offensive board, but the spark was short-lived.

Towns hit a three, then made an impressive reverse and got the foul…

…and Tyus Jones hit a jumper off the bounce with a pick on Clark, and Kerr called timeout with 8:52 to go and the Wolves’ lead up to 42-31.

Clark hit a long two on a pass from David West, but Muhammad hit two buckets in a row, the second a coast-to-coast layup after a missed Clark trey, and with 4:39 left, Minnesota had a 50-37 margin.

After another timeout, things go even worse for the Warriors, as Steph committed their seventh turnover with a bad pass at the wing, Towns then scooped the ball in for a layup, swatted Curry on a drive, and McCaw gambled on a cross-court pass, leading to a lefty jam from the left baseline to take a 54-37 lead:

Curry came back with a long two-pointer, then found Barnes on the fast break after a Bjelica missed trey, and McCaw capped a mini-run with a layup on another break after Wiggins missed a spinning fade over Barnes:

Out of another timeout by Thibs, Towns scored with Pachulia not looking on a lob from Rubio, Bjelica got an offensive banking putback as Draymond lost sight of him, but Klay made a nice steal of a Rubio telegraphed pass and finished with a Euro-step against a falling Bjelica…

…and Steph snuck a laser pass to Iguodala for a two-hand slam with 30 seconds remaining.

With 11.2 seconds to play, Curry picked Wiggins after crossing halfcourt, was grabbed throughout the layup with no call…

…and that upset Steph, who then fouled Rubio on the inbound, trying to aggressively get another theft.

Rubio hit two free throws, Green brought the ball up, and found Klay on a curl. Thompson up-faked, drove into the lane, and found Zaza for an easy bucket that Muhammad goal-tended.

The buzzer sounded, but the referees reviewed the play, and put 0.6 seconds back on the clock.

Rubio missed a 80-plus-footer and the Wolves took a 62-53 lead into halftime.