The Wizards and Jazz are Lottery Teams No More 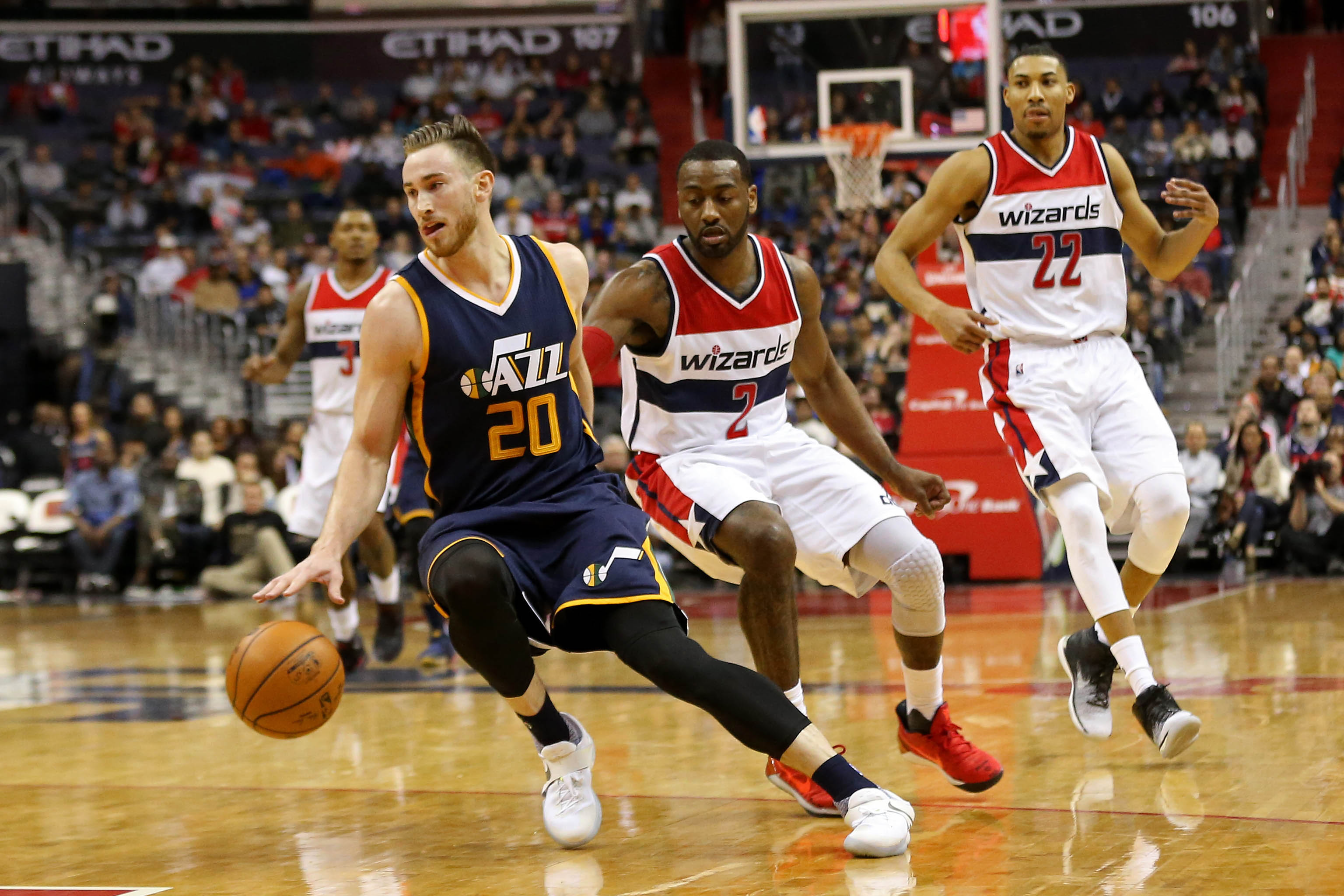 The Wizards and Jazz are Lottery Teams No More

Both the Washington Wizards and Utah Jazz ended last season in the lottery, but they won’t this year. How have their seasons mirrored each other this season?

Prior to last season, the buzz around the Washington Wizards grew to a fever pitch as fans and media piled aboard the hype train (there I go, mixing metaphors right off the bat). After a John Wall wrist injury left them just shy of the Conference Finals in 2015, this team was supposed to take off and reach for the stars (alright, I’ll stop).

Some prognosticators had the Wizards making said Conference Finals to face the Cleveland Cavaliers (yours truly was part of that group). Others had John Wall as their dark horse MVP candidate. With the continued development of Bradley Beal and a new commitment to playing small, this team was going to go places.

Out West, the Utah Jazz had collected similar buzz. A dominant stretch run to end the 2015 season, sparked by a trade that sent Enes Kanter to the Oklahoma City Thunder, unleashed a top-flight defense and a collection of talented young wings on the league. Rudy Gobert and all of his glorious nicknames were featured in countless preseason previews.

The Washington Wizards and Utah Jazz were teams on the rise, and their postseason dreams for the 2015-16 season were high. Then the games started, and instead of winning night after night, both squads started losing. Injuries piled up, the development of cornerstone pieces lagged behind schedule, and the expected win totals did not arrive. Both teams missed the playoffs by the slimmest of margins.

Although things began differently, both teams have yet again began mirroring each other. Utah weathered key injuries early to stay .500 or better for the first month, then began their slow and unstoppable climb towards a top-4 seed in the West. Washington, despite staying mostly healthy, stumbled to a 2-8 start. After floundering for a few more weeks, suddenly this squad clicked and began its meteoric rise up the standings to its current place at 3rd in the East.

The similarities continue. Both teams have a young core of talent they believe in that have shown they play well together and have a clear identity. In Salt Lake City, that identity is length on defense that funnels opponents into the whomping willow defending the rim and an offense that could see anyone on the court taking a key shot. In our nation’s capital, that identity is John Wall piercing the defense and versatile scorers hitting shots around him, while everyone pitches in to guard opposing squads without weakness.

Both teams also have great coaches roaming the sidelines, a must for any team hoping to contend. The Wizards hung onto Randy Wittman too long after his unlikely playoff success, but Scott Brooks has been everything they wanted. He has overseen the development of Otto Porter, Jr. and Kelly Oubre, Jr., installed a scheme that plays to his players’ strengths, and revitalized the play of Markieff Morris.

For the Jazz, Quin Snyder is one of the league’s rising stars, a cool-headed combination of Brad Stevens, Rick Carlisle and Erik Spoelstra. He runs creative sets, maximizes his play after timeouts, and is always tinkering away at rotations to find the best fit. Role players such as Joe Ingles and Jeff Withey are empowered to play key minutes alongside the team’s stars.

These teams also share a similar goal – to knock off the bullies on the top of each conference’s hills. Each also have a realistic shot to do so. The Jazz have the size and length to give the Golden State Warriors problems – Kevin Durant has been excellent on defense this season, but he is not built to battle Derrick Favors and Rudy Gobert on the block. Their all-wing lineups give no place for Steph Curry to hide on defense.

The Wizards also match up well against the Cleveland Cavaliers, as evidenced by a hard-fought overtime game the last time these two clubs met. John Wall has the length and foot speed to stay with Kyrie, and their collection of wings gives them multiple options to check LeBron, a must when facing Cleveland. On offense, Kyrie is going to die against screens set for both Wall and Bradley Beal, while Kevin Love and Channing Frye will be repeatedly attacked in the pick-and-roll game.

The place where these teams differ is in their long-term outlook. The ceiling is highest on the Utah Jazz – Dante Exum, Trey Lyles, Rodney Hood, and even Rudy Gobert are young and will continue growing as players. Gobert and Gordon Hayward are All-Star caliber players, George Hill is the perfect point guard to play in this scheme, and Quin Snyder may be discussed as a top-5 coach before too long.

The Wizards have talent, but Wall and Beal are the players they will be, and Marcin Gortat is going to pass out of his prime soon. Oubre and Porter are the two young guns on this roster, but Porter’s leap this season could be most of the growth he had remaining. This team can – and, if this season is any indication, will – improve, but their ceiling falls short of Utah’s.

On the other end, however, the Wizards have a much higher floor that the Jazz. Wall, Beal, Markieff Morris, Gortat, and Oubre are all under contract for at least two more seasons beyond this one, and Porter will be on team control beyond that after hitting restricted free agency this summer. Add in Scott Brooks’ contract to stick around for the long haul, and this roster is set for the next few seasons.

Tensions in Utah will hit as soon as the season ends, as this team faces a host of critical decisions this summer. All-Star Gordon Hayward will almost certainly choose to hit the open market this offseason as an unrestricted free agent, with rumors linking him to Indiana, Boston, San Antonio, and Miami, among other places. He is joined in unrestricted free agency by George Hill, who has been the Jazz’ third-best player this season and a perfect fit for this roster and system.

Beyond those two players, Utah is faced with even more decisions. Derrick Favors will be one season away from free agency, and the Jazz have to decide their long-term plan for this roster before they can make a move with Favors. Do they offer him a contract extension to stay in Utah as part of their long-term core? Or do they look to a combination of Trey Lyles and small-ball wings as their rotation moving forward, and look to flip Favors for assets?

Do-it-all wing Joe Ingles is a free agent, as is fifth big Jeff Withey. Those players have been valued in Utah, but the timetable of prioritizing the two “GH” players could result in those pieces signing deals elsewhere while the money is flowing. The precarious balance Utah will be attempting could result in all of the dishes falling to the floor and shattering. Rudy Gobert is tremendous, but a core of Gobert, Favors and Rodney Hood doesn’t challenge Golden State. Their floor is as low as their ceiling is high.

These two teams are not built the same, with key strengths in different areas from each other and a very different playing style. But after falling short of expectations together last season, these two lottery teams will be such no longer. They have both followed each other up to the top, and, with a month left in the regular season, are not fighting for a playoff spot but rather the right to host a first-round series. For this year, at least, these teams are excelling.