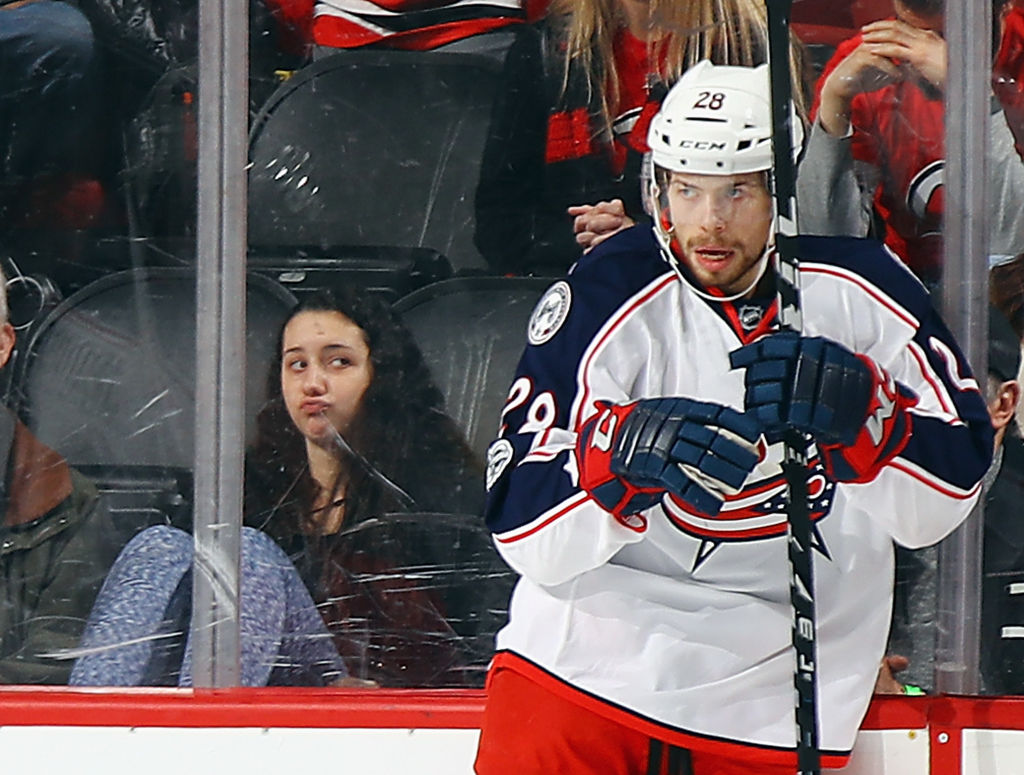 If you survived tonight’s hockey game without serious injury or significant penalty: congrats! You’re lucky! For no apparent reason, the Blue Jackets and Sabres went from “typical Saturday game” to “angry rollercoaster of doom” with very little warning. In the process, Buffalo managed to claw back from a 3-0 first period deficit and beat Columbus 5-3. As suggested by such an insane comeback, the journey was an absolute mess.

The rough moments started early in the game, with Ryan Murray blocking a Buffalo shot off his hand, and leaving for the remainder of the game. Playing short one d-man didn’t help matters, but didn’t explain the late-game chaos.

In the second period, everything went sideways. The Sabres tallied three goals, including one in the first minute, and another in the final minute. All the while, skaters from both teams lost their minds. A Dubinsky hit on Tyler Ennis seemed to uncork the vitriol, as Marcus Foligno tried to retaliate and stepped on Cam Atkinson’s back in the process (Atkinson left the game for a time, but returned later). Then, Nick Foligno poked too much at the Buffalo goalie, and ended up in a tussle with Josh Gorges.

At the tail end of the period, Sam Reinhart took a teammate’s shot to the midsection and left the game in pain (although he did return in the 3rd). Then, after the second period ended, Hartnell got into a scuffle with both Zach Bogosian and Nic Deslauriers. That somehow meant 3 different misconduct penalties and a Buffalo powerplay to start the third period.

And then in the final frame, the mayhem continued. Jack Johnson took a high stick and bled (but no call against Buffalo). Cody Franson took a shot to the face and left the ice bleeding (eventually requiring the ice crew to scrape up the blood). Nick Foligno took a CBJ shot in the back, and left in pain.

All the while, Buffalo just kept climbing back into the game, putting up five unanswered goals in the second and third periods. The game-winning Evander Kane dagger came on a powerplay, and Jack Eichel finished the night with an empty net goal.

The Blue Jackets had complete control after 20 minutes, and those same Blue Jackets threw away an easy two points as their 3-0 lead evaporated. Saturday was not a fun night to watch pro hockey in Columbus.

From the NHL official Game Summary, you’ll note that things seemed normal in the first period. What an idyllic time.

The penalty list isn’t explanatory for either team’s result. Rather, the penalties help show the kind of off-the-rails experience that evolved in the final 40 minutes.

The star of tonight’s game was the second goalie used by the Sabres. After Anders Nilsson gave up 3 goals in the first period, Lehner was called for the second and third. And Buffalo’s regular starter was excellent, going perfect on 24 shots against.

Lehner’s best of the game? This save on Cam Atkinson.

Robin Lehner just preserved the Sabres win with this save on Cam Atkinson in the closing moments of the 3rd. Dear lord. #CBJ pic.twitter.com/snydW4S52y

Columbus did a lot to lose this game, taking so many penalties, and never re-establishing the kind of dominance they flexed in the opening frame. Lehner also deserves a ton of credit for keeping the Sabres afloat throughout the comeback process. Coming into tonight’s game, Lehner had a .926 even strength SV%, and he’s a big reason why Buffalo only near the bottom of the NHL standings (as opposed to at the very bottom).

Cam Atkinson was stepped on by another hockey player. You may remember, that “another hockey player” describes one of those other guys wearing sharp blades on his feet. It’s not the kind of thing you see every day. Thankfully, Atkinson returned to play later in the game, but his time off-ice was worrying for Columbus fans.

A lot happened leading up to the power play that the Jackets received. Yeesh. #CBJ pic.twitter.com/Att7J6Dd3M

Later on, Buffalo d-man Cody Franson was hit with a puck. Franson bled enough that the ice crew to scrape the surface before play could resume. Gross! (Thankfully, the gif isn’t too graphic.)

Cody Franson takes a puck to the face and the puck almost goes in but hits the crossbar. Lot of blood left on the ice by Franson. #CBJ pic.twitter.com/DSmnPUbqhE

The Awful: This Game

Columbus doesn’t need to win most of their remaining games. The prior 66 helped them get to such a high standing in the Eastern Conference.

The Blue Jackets also shouldn’t throw away points like this. The final 40 minutes were some of the most unwatchable they’ve had all year.

The Tweet of the Game sometimes only applies to a small subset of people. But it matters to them, so here we are.

Indulgent Part of the Recap

The Clarkson Golden Knights Women’s Hockey team beat Cornell 3-1 in the NCAA tournament to advance to the Frozen Four! So at least something good happened today.

The Blue Jackets return to action on Monday when they visit the Philadelphia Flyers.