Your Morning Dump... Where Horford wants to win, no matter what you say 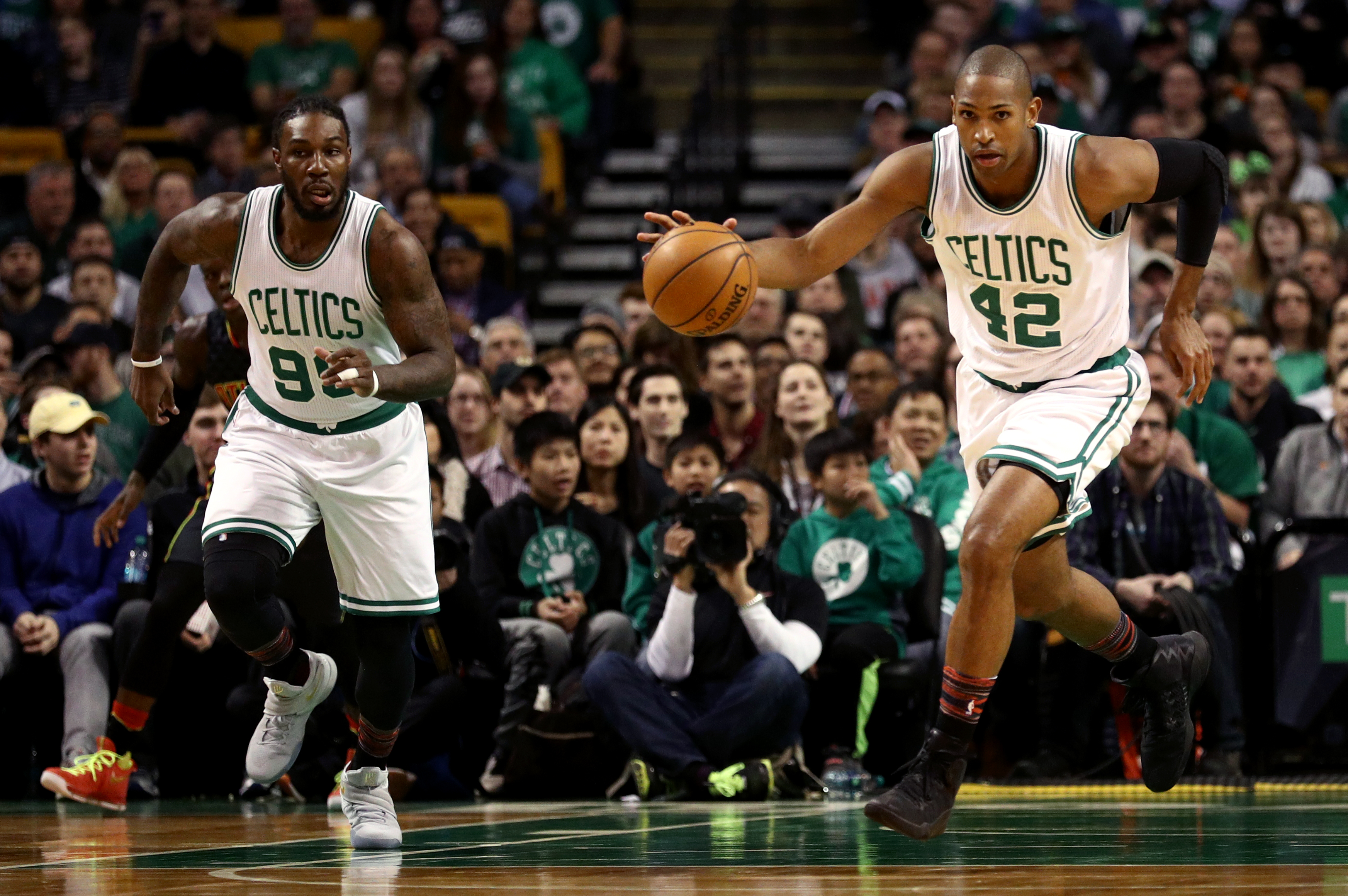 Your Morning Dump... Where Horford wants to win, no matter what you say

Some Celtics fans have become frustrated with Horford’s lack of scoring punch, particularly in the interior. He is averaging 14 points per game, and 32.9 percent of his field goal attempts have been 3-pointers, up considerably from his previous career high of 24.4 percent set last year. Horford said he is not looking to shoot more 3-pointers; it is just that his role in the offense often sets him up in that area.

“I keep studying the film, and there’s definitely some opportunities where I can be more aggressive and score the ball more, but it’s really reads,” he said. “Sometimes I feel like I have a good shot, and then I see somebody that has a better shot. And honestly, I just want to win and I want the guys to feel good and for us to play at a high level.

“So sometimes I understand that I may not get as many shots as I want or have the opportunity to, because I know I’m going to get somebody else something. There’s a fine balance. There are some games where I will look to be more aggressive and score more, and then there are games that I want to be more of a playmaker.”

Boston Globe: Al Horford has been even more efficient and precise than most expected

Expectations can ruin everything. And when they do, we’ve only got ourselves to blame.

For the entirety of his career, Al Horford has been a pass-first player who’d rather face up and find a cutter than bury his shoulder into an equally large human and have a moose fight before throwing up a baby hook.

But because he went from making $12 million a year to making $26 million a year, people have projected different expectations on Horford. The added money, they say, gives him more responsibility. His job description, by virtue of being given a “max contract,” has radically changed, thus requiring him to be a different player than he has been in the past.

I understand that line of thinking. If you got a big raise at work, or a new job that nearly doubled your salary, you’d probably have a lot more on your plate. That’s what you’d expect, so that’s what you expect of Al Horford.

The Boston Celtics went and signed Al Horford so he could be Al Horford. They saw the player he was for nine years in Atlanta and they liked what they saw. They had an opportunity to get him, and they took it. The going rate was what it was, and they were willing to pay it to get THAT player to do the things he’s been doing.

What the Celtics have done is enhance all the great things about Horford’s game. His passing ability has always been great, and now they’ve put him in positions to maximize it. His intelligence has always been top notch, and now he’s putting it to even better use.

“honestly, I just want to win and I want the guys to feel good and for us to play at a high level”

Isn’t that what we are constantly begging players to be? Driven to win? A great teammate?

Al Horford didn’t change just because your expectations did. If you expected him to become a 25 point/10 rebound guy then it’s your fault when he doesn’t get those numbers, not his.

The Celtics got Al Horford to do Al Horford things, and he’s doing those things better than ever. They also tried to get the guy you want Al Horford to be, but he chose Golden State instead.

You see, the Celtics knew they needed a guy like that too. That’s why I keep saying this isn’t a finished product. The Celtics could jump to the top seed and that wouldn’t change the fact that the Celtics still need another score-first kind of guy.

Just because they don’t have that guy yet, and just because Al Horford is here right now while the Celtics pursue that guy, don’t give Al Horford that guy’s work. He’s not that guy. He’s Al Horford, and he’s pretty damn good at what he does.

Page 2: Jae Crowder’s ankle is almost back to normal

“That’s getting much, much better as you can tell,” Crowder said Friday in Denver before falling to the Nuggets, 119-99. “I’m able to put the ball on the floor more. I just knew that with time my ankle (would improve). My ankle needed as much time as possible to get back to where it needs to be. But it’s getting back to where it needs to be, as close to 100 (percent) as possible.”

MassLive: Jae Crowder says ankle ‘getting back to where it needs to be’

It’s nice to see Crowder getting his full game back. There are times where it feels like he’s still a step slow, and I wonder if that ankle continues to be an issue, but it’s very obviously coming along.

I wouldn’t be opposed to resting him from time to time to get him a little healthier. We’ll need him in the playoffs, so if he misses a game or two against maybe the Nets or Sixers, I’m fine with it (don’t bring up the Suns loss… if they’d just hit some free throws it would have been a win).

Crowder is an immensely important player. I want him as healthy as possible when the playoffs start.

The Warriors rested EVERYBODY last night in San Antonio, and the Spurs would have done the same except Kawhi Leonard is in the concussion protocol and LaMarcus Aldridge is being held out due to a minor heart arrhythmia. Which begs the question… what is a team’s responsibility when it comes to resting players and giving the fans what they paid for?

“I just think it takes away from it because we are here to see all the players,” said Mary Lou Mahone, a Spurs fan, who flew to Corpus Christi, Texas, from Sacramento, California, on Friday, before making the drive to San Antonio with her husband, Louis, a Warriors fan. “It’s kind of disappointing when you don’t get to see everybody. Is LaMarcus [Aldridge] even gonna be here?”

Louis Mahone added with a laugh that the situation between the teams “takes away from the game … but we’re here.”

Player safety is always paramount, so I’m ok with resting guys from time to time. The NBA schedule is a grind, the players are bigger, faster, stronger, and the demands on the body are greater than ever. Despite their big salaries and splashy ad campaigns, players are human beings. Their muscles, tendons, and bones don’t suddenly change because of the size of a bank account. So it’s important to listen to the science which has been increasingly telling us that these players do need a certain amount of rest to perform at their peak abilities.

However, the NBA is entertainment, and it exists solely at the behest of paying fans, be they in the arena or at home. If the fans don’t pay, the players don’t play. Disney paid a LOT of money for the right to televise a Golden State Warriors vs. San Antonio Spurs game in prime time on a Saturday night. They paid Lil John to remix his earworm for the promos. This was a game where NBA fans would blow off a Saturday night out to sit and watch an epic regular season matchup between the NBA’s two best teams. Fans made trips from around the country to see these two teams play just so they could watch the star players. People who maybe can only afford one game a year chose this one. The NBA has to be upset that the ratings for this game weren’t as high as they could be. Fans were disappointed they couldn’t see the guys they wanted to see.

Both of these things are true and hold equal weight. I’m sure Adam Silver was called by the folks at ESPN over this. I’m sure Silver wants to fix this to make sure both of the above sentiments are addressed. And they won’t admit it, but I’m sure Steve Kerr and Gregg Popovich (who had injuries take care of his plan to rest guys, but be sure… he would have rested those guys anyway) didn’t pick this game by accident. This was one of the highest profile games of the season… this sent a message.

It’s easy to say the league needs to address scheduling, but it’s hard to do. Arenas are shared by hockey teams and concerts. They need to be filled on a regular basis because they’re expensive to build and operate. They can’t just sit empty while the team is on the road. So it’s a complicated dance to fit 82 games into the allotted timeframe while taking a few dozen other buildings’ schedules into account.

The league can extend the season, which it’s already doing by eliminating some of the preseason. It’s extended the All Star break to help. Playoff series take longer. But how much longer can the season get? Championship teams play deep into June and they’re back just a few months later. At some point the season would just be too long.

There’s no easy answer here. Teams need to keep their guys healthy and the league needs its stars on the floor to sell the game. Somehow, they need to figure out the right way to balance these two needs without screwing the fans over in the process.

Globe: Lonzo Ball could be an NBA franchise cornerstone  |  Metta World Peace is riding the ride as long as he can

Herald: Hall of Famer Isiah Thomas praises “all in” mentality of Celtics All Star Isaiah Thomas  |  On draft day, Ainge might have no choice but to overstock backcourt

CSNNE: Celtics look to bounce back, add to Bulls struggles