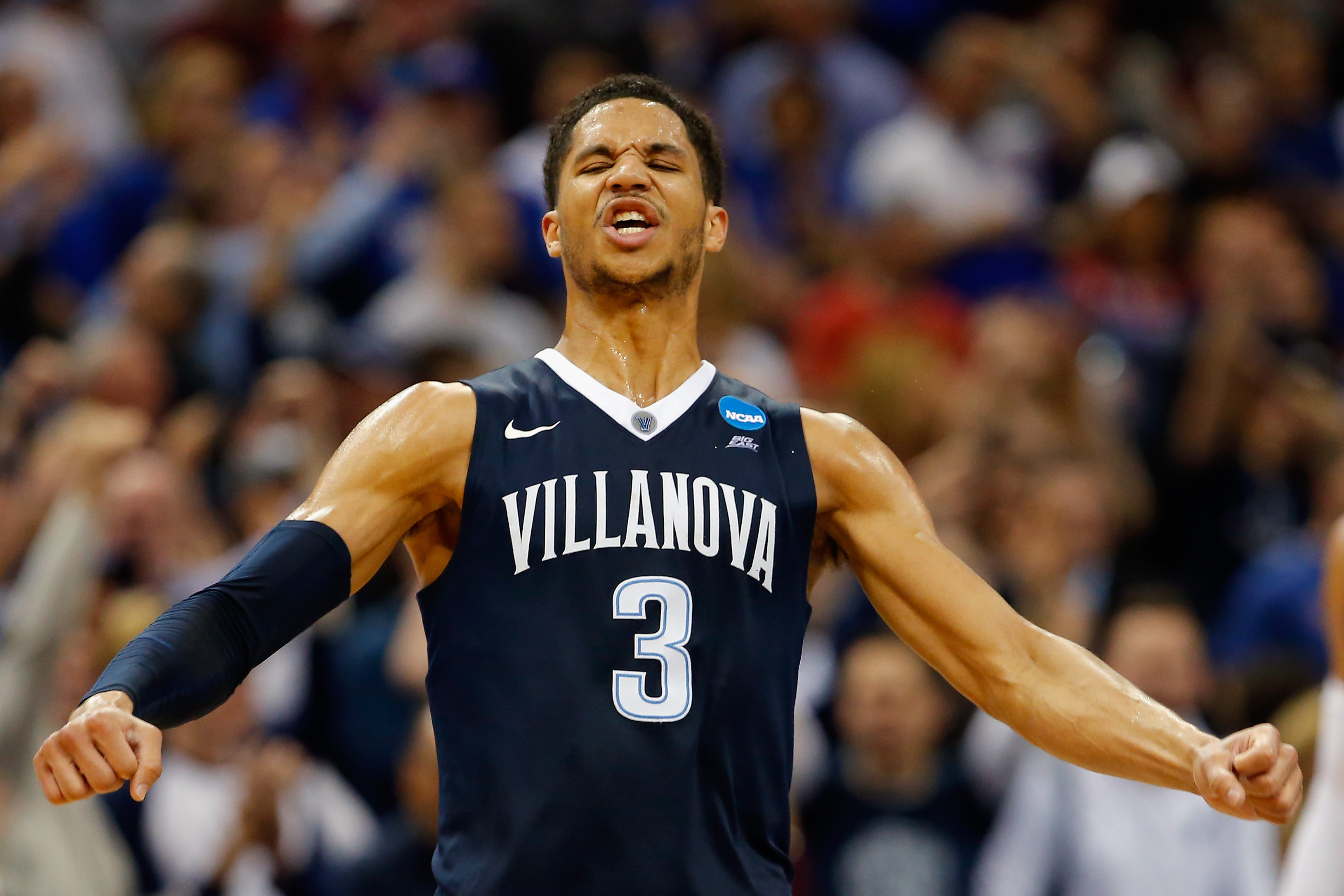 Over the weekend, I made the trip to Madison Square Garden for the Big East semifinals and finals. Villanova survived a seven-point halftime deficit versus Seton Hall in the semifinals on Friday, then squashed Creighton in the Big East championship game on Saturday. Here are a handful of my thoughts from the final rounds.

Starks grew up in Oklahoma and played only one year of high school basketball. Next, he was part of the “taxi squad” at Rogers State College, i.e. a replacement player who didn’t suit up or sit on the bench unless there were injuries or suspensions, before being expelled for stealing another student’s stereo equipment – this after that student broke into Starks’ room and the school was demanding John pay for the damages. From there, he transferred to Northern Oklahoma College in 1985 and began to enjoy some success, but ultimately left after being caught smoking marijuana in his dorm. In 1986, he enrolled at Tulsa Junior College, where he met Ken Trickey, the former coach of Oral Roberts University who was starting a basketball program at Oklahoma Junior College. Starks then played on Trickey’s team for a year, earning a scholarship to Oklahoma State University, where he played his final collegiate season in 1988.

Listed at 6-5 and 190 lbs. during his playing days with the New York Knickerbockers, the slightly undersized shooting guard with a sweet stroke and superb passing vision became a legend in the Big Apple thanks to his grit and ability on both ends of the floor.

But first he had to suffer through the slings and arrows of outrageous fortune (otherwise known as the system). Starks also was not drafted in 1988, appeared in 36 games with the Golden State Warriors that year, and then spent the 1989-90 season playing professionally in the CBA and WBL. Starks refers to Patrick Ewing as his “saving grace” since he injured his knee trying to dunk on Ewing during his first practice with the Knicks and the team was not allowed to release him if it didn’t heal before December.

What followed was in essence the “good old days,” at least for those who weren’t around to witness New York capture two titles in 1970 and 1973. In due time, Starks became the starting shooting guard on that Knicks team, and helped them reach the playoffs for eight straight years. This is the snippet that gets replayed over and over, but Starks will always be remembered in NYC for his ultra-competitive, high-energy, never-say-die style of play.

That same heart is what has separated Hart from others, even dating back to his younger days. After an amazing junior year of high school hoops, Josh was nearly kicked out of Sidwell Friends School until students and parents petitioned for him to receive a second chance. Hart’s quote upon committing to Villanova rang true in the final minute of the Wildcats semifinal win on Friday.

“It’s about doing the things that the coaches want me to do…I might not hit the winning three but I’m going to be the one that goes and gets a rebound when we need it and goes on the floor for a loose ball, anything we need to win.”

Hart has many of the same traits of a John Starks. In the past, I’ve compared him to Avery Bradley and Courtney Lee, and the truth is that he possesses some of each’s best strengths: Bradley’s boarding, Lee’s build, and Starks’ penchant for passing. All three of those guys are (or were) solid starting shooting guards in the NBA with 3-and-D profiles, and Hart might become one sooner or later as well. At 6-5, 215 lbs. with a 6-7.5 wingspan, Hart is perhaps longer and stronger than any of the aforementioned athletes. He’s a quality defender and impressive passer who’s not afraid to bomb away from deep. Josh also has that bounce like John Starks.

It will be increasingly interesting to follow him in the NCAA tournament. What if Nova makes another deep run, or even wins the whole thing again? How high can Josh Hart soar in the 2017 NBA Draft? Only time will tell.

2. Justin Patton is the truth

Just like the first game on Friday, the second half of the second game that night was dominated by the winning team’s best player. Patton came out and drained a triple right away and showcased his versatility on that end at various points. While most of the big men in this upcoming draft class have seen their stocks plummet as the season has gone on, Patton’s hype-train is filling up.

Patton slides his feet extremely well defensively, rapidly trapping and recovering in the pick-and-roll, plus he protects the rim thanks to impeccable size, length, and instincts. However, his box outs are flat-out abysmal. He doesn’t have much in terms of lower-body strength, but what’s worse is Patton doesn’t regularly get low or even attempt fundamental box outs. As a result, the seven-footer snagged half as many rebounds (eight) as Hart (16) this past weekend.

Offensively, Justin rushes his moves fairly often, but his potential is evident. A couple months ago Creighton lost their starting point guard, senior Maurice Watson Jr., for the rest of the year due to a torn ACL (just as Xavier lost Edmond Sumner), and the Bluejays struggled to take advantage of Patton versus a smaller Villanova team in Saturday’s championship game. Marcus Foster is a phenomenal scorer who is currently projected as the 42nd pick by DraftExpress, but he is not on the same level as Watson (8.7 assists to 3.7 turnovers) in terms of getting his teammates involved (2.5 dimes to 2.2 turnovers). Without one of the country’s top playmakers, it’s not a huge surprise that Creighton was no match for a Wildcats club that shook off a shaky semifinal performance (that included a 20-point first half).

Patton was named Freshman of the Year in the Big East, and his agility, length, and offensive package have put him on the path to becoming a potential lottery pick. A solid showing in the NCAA tournament could help cement him as a top-14 prospect. And with numbers like these, it’s really no surprise.

Listed at 6-4, the smooth lefty guard can do a little bit of everything: drive, dish, swish, and slide his feet defensively. His wingspan was measured 6-5 back in 2013 at the LeBron James Camp, via DraftExpress.com, but I’d be surprised if Khadeen hasn’t gotten longer since then.

Carrington was quiet for much of the contest and struggled from the field (4-13), but came up with clutch buckets to keep Seton Hall on top until Hart’s heroics stole the show. He could eventually become a decent combo guard off the bench at the next level.

Bluiett has the size (6-6, 215 lbs), strength, and shooting to be a decent backup 2 at the next level. He’s not shy about firing away, as evidenced by a nine-for-11 performance from beyond the arc against Cincinnati back in late January, and like Marcus Foster, does just enough playmaking to serve as a capable creator when called upon.

Trevon was playing well while Sumner was still healthy, but all eyes have been on him since the sophomore suffered his season-ending injury. If Bluiett and Foster can improve on defense and keep exhibiting deep range, they could both become spark-plug scoring guards off the bench in the NBA.

Jenkins struggled badly against Seton Hall on Friday, finishing with four points on one-of-eight from the field. On Saturday, Kris canned his first shot of the evening and helped key a much better performance from the Wildcats in the Big East championship game. I’m much less worried about him on offense than defense going forward though. Jenkins was often slow to close out on perimeter shooters. At the next level, a lack of quickness could haunt him if he is forced to play the 3, whereas he may not possess ideal length to slide down to the 4. Jenkins is very savvy overall, willing to play in the post, and possesses a workhorse 3-and-D profile similar to Wes Matthews. But Kris might not be able to match Wes when it comes to lateral quickness.

Jalen has been a bit overshadowed by Hart, Mikal Bridges, and Jenkins, but he quietly controls the tempo for the Wildcats. Deceptively quick, full of tricks, and confident with the pull-up jumper, Brunson could eventually carve out an NBA career for himself just like his father Rick, who reached the Elite Eight with the Temple Owls back in the early 90s. Brunson uses his change of pace, footwork, ball-handling, and moxie to outsmart and outfox opponents. His defense is another story altogether, but luckily for him most NBA teams aren’t drafting or signing back-up (or starting) point guards because of their defensive dominance.