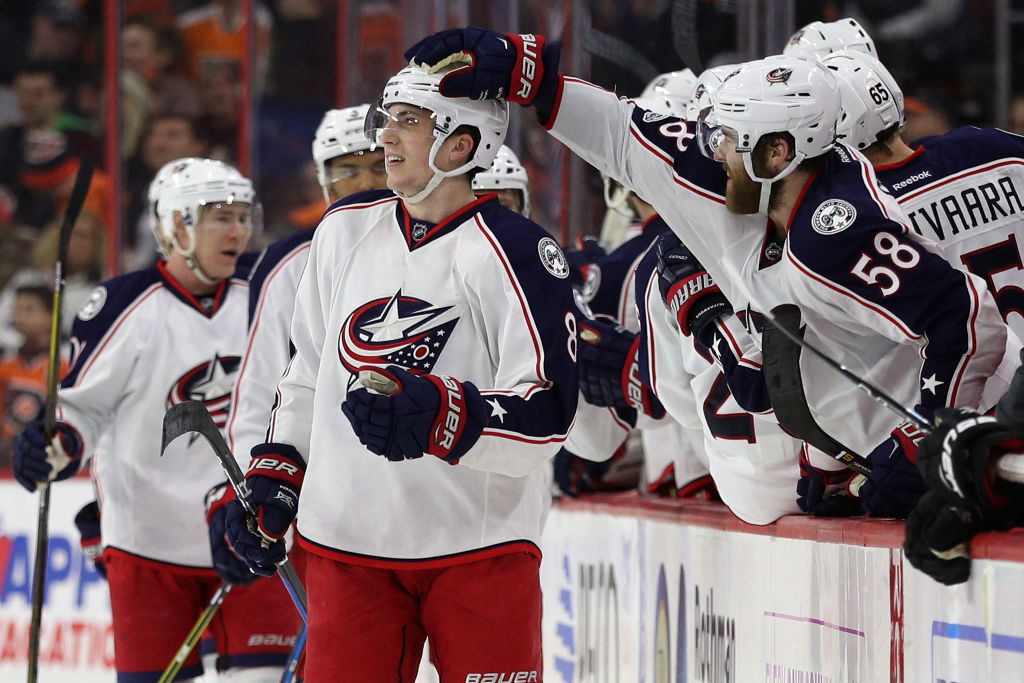 Things never seem to come easy for the Blue Jackets. Columbus was primed to set a new franchise record in wins and points on Saturday in Buffalo, and then squandered a 3-0 lead before losing to the Sabres. Tonight, the Jackets had another chance. They traveled to Philadelphia and built a 2-0 lead. Then, in the game’s middle frame, self-inflicted plain threatened to derail history again. The Blue Jackets took seven penalties (including five in quick succession), and let the Flyers jump ahead 3-2. But the Jackets would not be stopped, as they managed to rebound with 3 more goals, finishing the game with a 5-3 win.

The story is in the frustration of the middle sections of the game. In total, Columbus took nine minor penalties, allowing Philadelphia 8 powerplay chances on the night. It’s annoying in several ways. First, the penalty parade came in contrast to a tidy first period, where the Jackets handily out-shot and out-played the Flyers. Mental momentum is a mysterious, poorly-explained, and over-referenced force in sports. Playing on a penalty kill for most of a period is fairly straightforward: it’s bad, and it lets opposition get back into a game.

An endless stream of penalties is also frustrating from an entertainment perspective. Abrupt play stops and starts ruined any sense of flow in the second period. Speaking only for myself: it’s hard to stay focused on a game when the hockey can’t keep moving and runs long on account of the stoppages and penalty announcements. (Although perhaps a Philly fan would disagree, particularly if the Flyers had turned more powerplays into goals.)

Thankfully, the game did have fun parts!

The all-time CBJ rookie scoring leader notched another two points in Monday’s game. The first was a brilliant stretch pass to spring Cam Atkinson on a breakaway goal. The whole play is great, ending on Atkinson’s fantastic finish. It’s the setup that makes the move possible.

The second point was a goal, Werenski’s 10th of the season. The point shot came just after a faceoff win, and ended the Columbus skid, tying the game at 3 apiece.

To top it all off, Werenski finished 1st on the CBJ in 5v5 CF% (83.33%), and won the shot attempt battle 11-0 when matched against fellow rookie d-man Ivan Provorov (via Natural Stat Trick). Werenski’s mastery of the NHL this season is incredible to watch, and tonight was another highlight.

In the lead-up to tonight’s game, we learned that Nick Foligno was out with an illness (via Aaron Portzline). At the outset, the Blue Jackets lines seemed to shift a bit to account for the captain’s absence, moving Oliver Bjorkstrand away from Scott Hartnell and Sam Gagner.

The change didn’t last very long, and Hartnell-Gagner-Bjorkstrand rejoined, becoming a 5v5 line for the rest of the game (granted, with the note that 5v5 didn’t happen as often as usual). The results were impressive. On the scoresheet, Gagner picked up his 18th goal of the year (tying a career high), off a pass from Bjorkstrand. Meanwhile, in the shot department, all three forwards finished the night above 70% CF% (via Natural Stat Trick).

As the season winds down and the playoffs pick up, the CBJ will benefit from a balanced attack. If the Saad-Wennberg-Foligno line cools down? Maybe Cam Atkinson’s sniping can pick up the slack. If Cam’s cold for a night? Maybe the Hartnell-Gagner-Bjorkstrand trio can find success in “softer” TOI assignments. The best part: it’s hard to imagine another team’s skaters shutting down all three lines at once (goalie related voodoo excepted).

The Excellent: This Season

After one of the worst seasons in franchise history, the Columbus Blue Jackets have set a new high water mark. Monday night’s game finished in a 5-3 win in Philadelphia, a victory over the Flyers and the team’s 44th win of the year. 44 wins is an all-time mark for Columbus, besting the 2013-14 season (43).

The win also adds two more points to the season total, and Columbus is now up to 94 on the year. With 14 regular games remaining, the Jackets have a chance to continue building on their historically amazing year.

And I think it’s worth remembering here: this season has been excellent, and will continue to be excellent, regardless of the playoff outcome. Players and coaches commented on the importance of what’s to come in the postseason, how the playoffs are their measure of success.

While I don’t fault the CBJ reps, I disagree slightly. Teams don’t always manage such impressive runs over an 82 game span, a fact that stands no matter the outcome of a seven game playoff series. As a fan, I’m going to cherish the rest of this season because I know the alternative all too well.

So about those penalties…

I mean, the CBJ were certainly on #brand.

The Blue Jackets return home Thursday to take on the Computer Boys of the Florida Panthers.