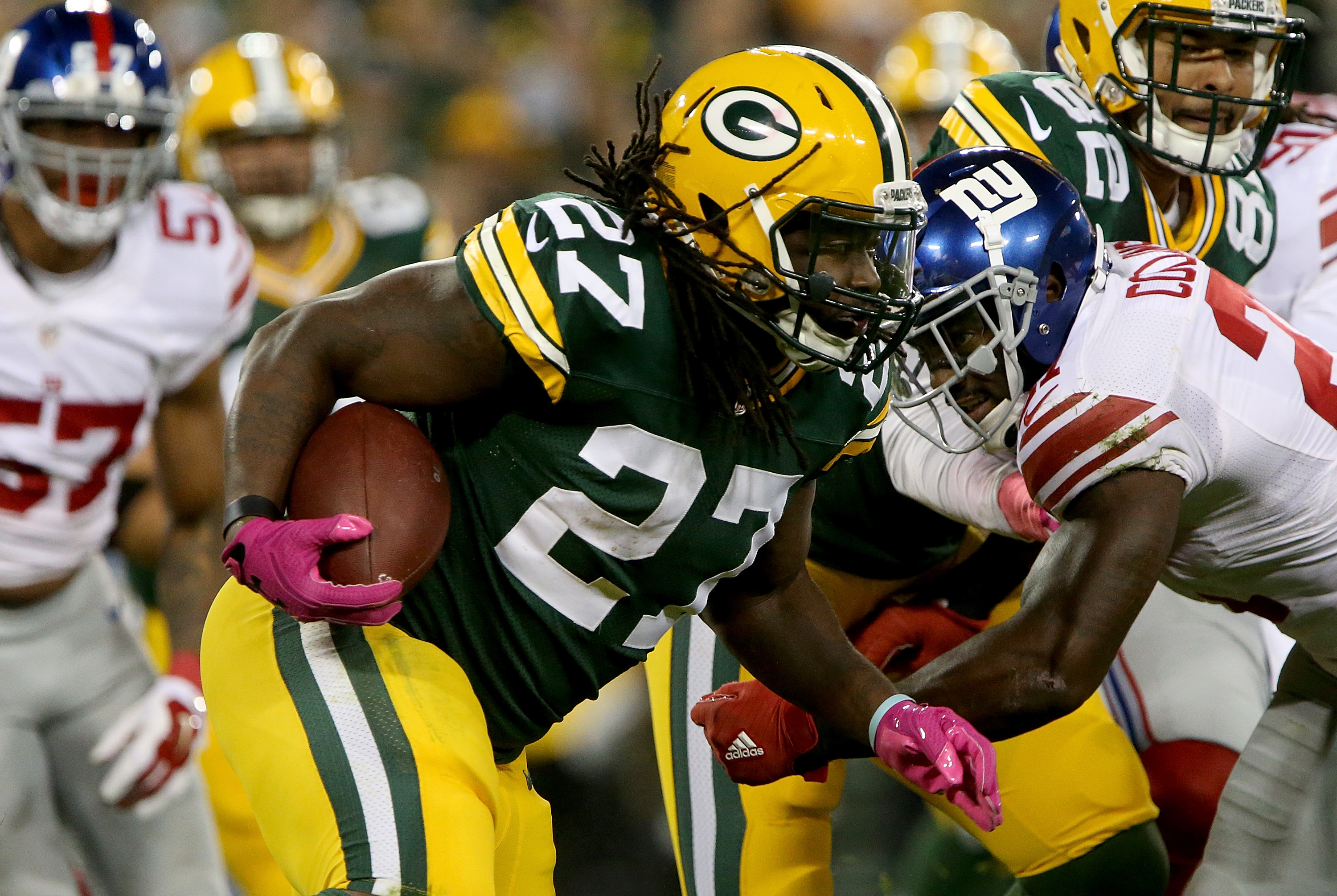 NFL free agency is the gift that keeps on giving.

Almost a week into the start of the new league year, there’s still plenty of wheeling and dealing going on and a lot of developments that are hard to believe.

Eddie Lacy becoming the first running back to sign

.@Lil_Eazy_Ana_42 has agreed to terms with the @Seahawks. #GoHawks #Seahawks pic.twitter.com/B5zkGcTsK4

Except maybe for Charles, Lacy is the riskiest free agent in that group and he’s been battling weight problems. According to Bob McGinn of the Milwaukee Journal Sentinel, he weighed 267 pounds on one of his free agent visits.

So on the surface it’s surprising that Lacy was signed first. However, it could be that he went first because he was the cheapest.

Lacy signed a one-year, $5.5 million deal. He’s joining a committee with Thomas Rawls and C.J. Prosise. It would appear that the Seahawks are taking a flier on Lacy and therefore not forking over too much money just in case Lacy still can’t put down the fork.

Fullbacks such as Kyle Juszczyk and Patrick DiMarco were signed early, but the aforementioned ball carriers have to wait. Perhaps in an increasingly pass-happy league, running backs just aren’t going to fly off the shelves on the first day of free agency.

Jamaal Charles had a visit to Seattle planned, but he can just scratch it off the list now that the Seahawks have signed Eddie Lacy.

According to Pro Football Talk, Charles is still planning to visit the Seahawks on Wednesday.

Apparently the Seahawks are trying to put together a Dream Team backfield.

The 30-year-old Charles has played in just eight games in the last two seasons because of knee injuries.

Perhaps the Seahawks want to find a veteran presence to go with Thomas Rawls and C.J. Prosise, and they want to have both Lacy and Charles in case one of them doesn’t work out.

Browns being saavy enough not to really want Brock Osweiler

When the Texans traded Brock Osweiler to the Browns on the first day of free agency, there might have been a few snickers among the shockwaves. The Browns and Osweiler seemed like a match made in comedy heaven.

But just as surprising as the deal itself was the fact that the Browns’ evaluation of quarterbacks has developed to the point where they don’t view Osweiler as a starter.

The Browns and Texans rocked the football world when the Texans traded Osweiler, a second-round draft pick in 2018 and a sixth-round pick this year to the Browns for a fourth-rounder this year.

The Texans got Osweiler’s $16 million salary off their hands, and with more than $100 million in salary cap space the Browns could afford to take the hit. The Browns have 11 picks in this year’s draft, including the first and 12th overall, and this deal gives them three second-round picks in next year’s draft.

Even if the Browns can’t trade Osweiler for more picks and have to eat his salary after releasing him, this trade could rank right up there with the Herschel Walker trade if the Browns use their bounty of draft picks to build a winning program.

If not, this trade will be forgotten about, as shocking as it was.

Martellus Bennett signing with the Packers

It’s not a surprise that former Patriots tight end Martellus Bennett signed with another team, but did anyone figure that he’d be back in the NFC North?

The Packers signed Bennett to a three-year, $21 million deal after allowing Jared Cook to test the free agency waters.

It’s mildly surprising that the Packers didn’t hang on to Cook after he caught 13 passes in the final three regular-season games and 18 passes, two for touchdowns, in three playoff games. He caught just 30 passes for the season and hasn’t caught more than 52 passes in a season, but the soon-to-be 30-year-old hinted in those final six games that he finally might be taking that step up to the next tier of tight ends.

Bennett is already there. He’s coming off a 55-catch season and led the Patriots with seven touchdowns. He could be lining up twice a season against former Bears teammates who he used some unprintable words to describe in an interview last season.

With Chris Hogan and James White coming out of nowhere to star in the AFC championship game and Super Bowl LI, respectively, it seems like the Patriots have about two dozen pass catchers on their team.

Somehow, they’re able to add Brandin Cooks to the mix.

The Patriots traded their first- and third-round picks this season to the Saints for Cooks and a 2017 fourth-round pick.

A first- and third-round pick might seem like a lot to give up for anyone. But the first-rounder is the 32nd pick, barely a first-rounder, and the third-rounder is a compensatory pick, No. 103. That’s like a third- and fourth-round hybrid.

Cooks, only 23, was seventh in the NFL with 1,173 receiving yards last season and ninth with eight touchdowns including a 98-yarder in Week 1. He’s developing into an elite receiver.

The 20th overall pick in 2014, Cooks becomes the fifth Patriot currently on the roster who was drafted by another team in the first or second round since 2012. The Patriots also have the 40th pick of that draft, former Lions linebacker Kyle Van Noy, and hours before getting Cooks they acquired the 60th pick in that draft from the Panthers, defensive end Kony Ealy.

Also on the Patriots roster are former Bears linebacker Shea McClellin (2012, No. 19), and former Bills cornerback Stephon Gilmore (2012, No. 10). That doesn’t even count former Cardinals receiver Michael Floyd (2012, No. 13) and former Browns and Patriots linebacker Barkevious Mingo (2013, No. 6). Mingo signed with the Colts and Floyd is a free agent.

It seems the defending Super Bowl champions have a way of eventually getting draft picks they weren’t able to get during the draft.

Malcolm Butler’s falling out with Patriots

The relationship between Super Bowl XLIX hero Malcolm Butler and the Patriots seems to be deteriorating. He wants a long-term contract but all the Patriots have offered is a first-round tender.

With Butler earning himself the moniker Malcontent Butler, the Patriots went and signed Stephon Gilmore to a five-year, $65 million contract.

It shouldn’t be surprising that the Patriots are paving the way for Butler’s exit. Successful organizations can’t be sentimental when it comes to personnel decisions. But there’s another potential surprise brewing.

Butler had been part of the talks leading up to the Cooks trade. If the Saints sign him to an offer sheet that the Patriots don’t match, the Patriots would get their higher first-round draft pick, No. 11.

If that happens, the Patriots will have given up the No.32 pick to get Cooks but received the No. 11 pick in exchange for Butler, and Bill Belichick would out-smart the NFL yet again.

The Giants’ organization is steeped in tradition. It’s a meat-and-potatoes franchise that rarely does anything flashy.

However, the Giants turned some heads by signing Brandon Marshall to a two-year, $12 million contract. That increases the star power at the wide receiver position as Marshall joins Odell Beckham Jr. Marshall caught 109 passes two years ago when the Jets came within one win of the playoffs. His 59-catch season in 2016 can be considered a throwaway in a year when nothing went right for the Jets.

Marshall will be 33 next season, so this move signals that the Giants want to squeeze one more championship out of the Eli Manning Era.