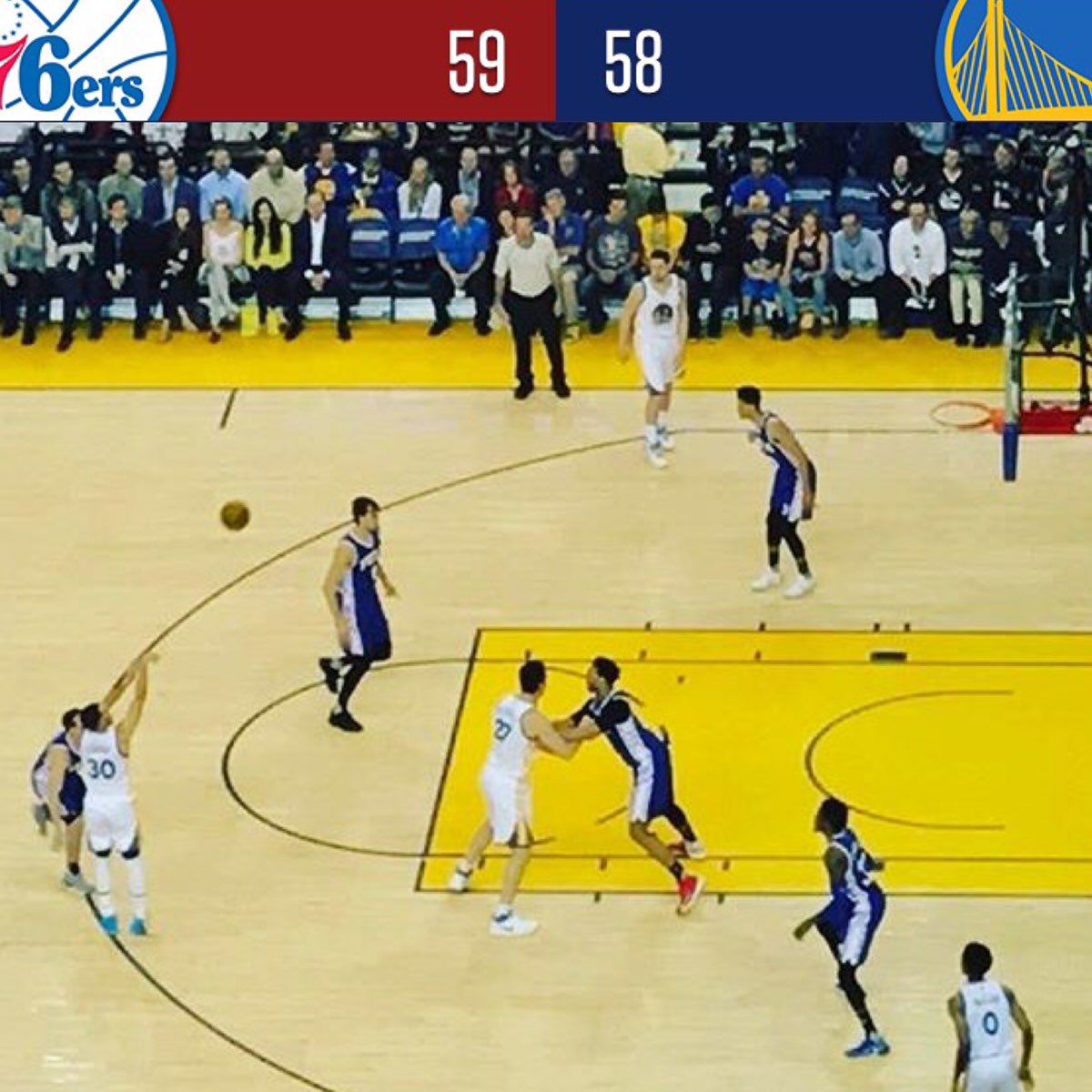 ORACLE ARENA, OAKLAND, CA — Three nights after having the bench unit lose in San Antonio, the Golden State Warriors (52-14) were finally back for a homestand to start off against the Philadelphia 76ers (24-42).

The Warriors got off to a slow start, as both Stephen Curry and Klay Thompson missed open triples. Meanwhile, Dario Saric dunked on a fast break layup after a bad turnover by Draymond Green. Patrick McCaw, who started in place of Durant, also made a poor internal pass.

But Klay Thompson struck back after a series of empty possessions, getting a left side banker to fall with the right-hand, then after a missed free throw from Green, hit another three on an extra pass from McCaw after Pachulia drew a foul on the miss:

Gerald Henderson answered with a tough jumper, but Draymond made an extra swing pass on the next half-court set with Zaza supplying a pick for an open trey by Thompson again:

After the timeout, Curry got a hand on a pass from Robert Covington, enabling McCaw to lead the break. Patrick threaded a bounce pass to Steph for a pinpoint layup, but Nik Stauskas came off the bench and hit a three plus a righty layup and Warriors head coach Steve Kerr called timeout with 3:33 to play, down 24-22.

Out of the timeout, Curry finally got a triple to fall, getting the swing pass from Draymond. Later, Steph also drew three foul shots and made them all, fed Andre Iguodala for three more from the right wing…

…and after a Sixers turnover, Green found a streaking JaVale McGee for a scoop in transition:

However, Henderson found Richaun Holmes for a bucket with 25.5 seconds left, and the Warriors held a slim 35-34 lead at the end of one.

Thompson hit another bucket and Barnes drilled a catch-and-shoot from Clark from distance, prompting another Brown timeout as the Warriors inched ahead, 42-38.

After the timeout, Clark led a break after a missed three and fed a no-look pass to Iguodala darting down the left side for a slam dunk:

…but Golden State gave up two straight buckets, called timeout, and Curry threw the inbound away to McConnell who converted the break with Stauskas to tie the score at 47-47.

Kerr had brought in the Matt Barnes version of the “Death Lineup” and Thompson hit another triple to give the Warriors a slim 54-53 lead approaching three minutes left.

After free throws traded by Draymond and McConnell, Shawn Long missed inside and that turned into a touchdown pass to Barnes from Steph, but Iguodala smoked a reverse layup in transition, Klay couldn’t hit after dribbling-and-popping using a pump-fake, and Saric missed a three over two Warriors from the top at the buzzer, resulting in a 76ers halftime lead of 59-58.