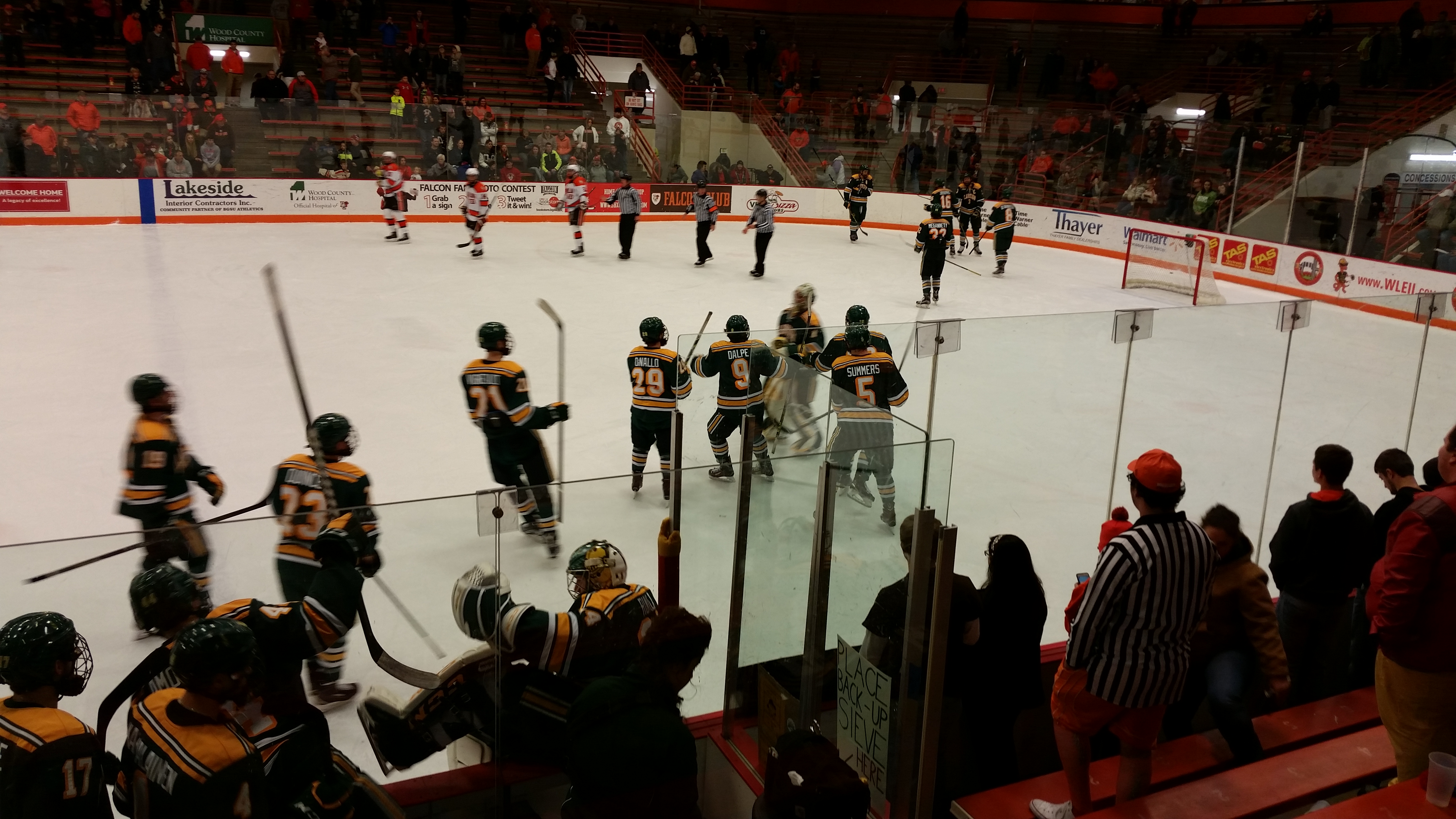 The Columbus Blue Jackets made UFA news Wednesday night. TSN’s Bob McKenzie reported that Columbus were on the verge of signing forward Sam Vigneault to the team. Vigneault just finished his junior season in college hockey with the Clarkson Golden Knights of the ECAC.

McKenzie first reported the action on Twitter, sharing general details about the contract. McKenzie followed up, noting that Vigneault will follow a path similar to the one Zach Werenski took last season.

When deal gets done, expectation is Vigneault will go to Lake Erie (AHL) on ATO, 2 year EL contract kicks in next season. Would forgo sr yr.

The Blue Jackets confirmed the move Thursday morning: AHL contract this year, two year entry-level deal to follow. The Clarkson skater will forgo his senior season in Potsdam, NY by making the jump to pro hockey with the Cleveland Monsters for the rest of the 2016-17 season.

The Blue Jackets have had their eyes on the Clarkson forward for some time. Vigneault was a FA invite to the 2016 Jackets Development Camp in Columbus (part of the Group 2 roster). The interest became more pronounced early this month, as reported by Cap Carey of the Watertown Daily Times. Carey shared that Columbus coach John Tortorella and other CBJ hockey ops personnel were in Potsdam to scout a Clarkson game (via Cap Carey on Twitter). Carey reiterated on his Instagram that Vigneault was a likely target.

Sam Vigneault’s numbers don’t immediately pop off the page, which makes the signing a bit of a risk. Over the course of his college career, Vigneault totaled 30 goals and 45 assists in 106 games. It’s not the kind of production that suggests surefire translation to the pro game.

With more analysis, however, the move appears a more savvy kind of risk. Sam Vigneault is 21, and hails from Baie-Comeau, QC. He’s officially reported as being 6’ 5’’ and 203 lbs, and appears tall and lanky on the ice.

Vigneault recently spoke with Cap Carey in a preview before Clarkson’s playoff series with RPI. The forward discussed aspects of his playstyle, the impact of his large frame on his skill set, and how he developed over time at Clarkson.

It’s relative play that makes Vigneault stick out, as he has been a fast and creative center among an otherwise unremarkable set of forwards with Clarkson between 2014-15 and 2016-17. Sam Vigneault was easily the Knights’ most fearsome offensive weapon for most of his tenure in college. From the limited in-person sample with my eyes: Vigneault’s time on the ice generally tended to result in Clarkson entering the offensive zone and maintaining the attack. Vigneault was able to create chances single-handedly, but lacked linemates of similar skill for much of his college career.

Clarkson University is a former men’s hockey power program. It was a dominant force in the ECAC throughout the 1990s. The men’s hockey team, however, has suffered through a rough patch, having gone 9 years without an NCAA Tournament berth. Vigneault represented one of the few creative offensive talents on the roster in the past several years, and was the Clarkson leader in goals, assists, and points over his time as a Golden Knight.

The past two years have been the most impressive for Vigneault. Last season, the forward led Clarkson in goals, points, goals per game, points per game, and powerplay points; he was second on the team in assists, but only 9th among Clarkson players in shots per game (via College Hockey Inc). This season, Vigneault led his team in points, assists, assists per game, and points per game; he was second in goals, and his shooting jumped to 5th on the team (up from 1.81 shots/game to 2.15) (via College Hockey Inc).

Now the risk part: there’s a real chance that a non-point-per-game college player doesn’t work in the AHL, let alone the NHL. The good news: the Blue Jackets haven’t spent any additional assets to acquire Vigneault. This isn’t a trade, so draft picks and other prospects remain untouched. This gives Columbus exclusive access to Vigneault for the next two years. If the raw talent simply needs offensive teammates to blossom, then it’s the Jackets who benefit from this move. If Vigneault can’t make the jump, then he’ll remain in the AHL or ECHL to fill depth in the CBJ system.

More stats for Sam Vigneault can be found at Elite Prospects, and you can check out Vigneault’s full bio at the Clarkson Athletics page.

Vigneault put up a goal and two assists in a 7-4 win over RPI, and you can find the highlights from Clarkson’s Athletics YouTube below. There’s no sound, but you’re looking for #21 on the home team (and the goal-scoring play happens immediately).

And finally, for a glimpse at Vigneault in a Columbus uniform, you can look to the 2016 4-on-4 Development Camp video from the Blue Jackets. Vigneault is wearing #74 in gray (Team Gingher), and the his setup passes happen at 28:54, 33:51, and 1:12:29. The most impressive is the last of the three, a great drag move along the boards before dishing to Frank Hora. I’ve embedded the full tournament video below, but it’ll start at 1:12:29.