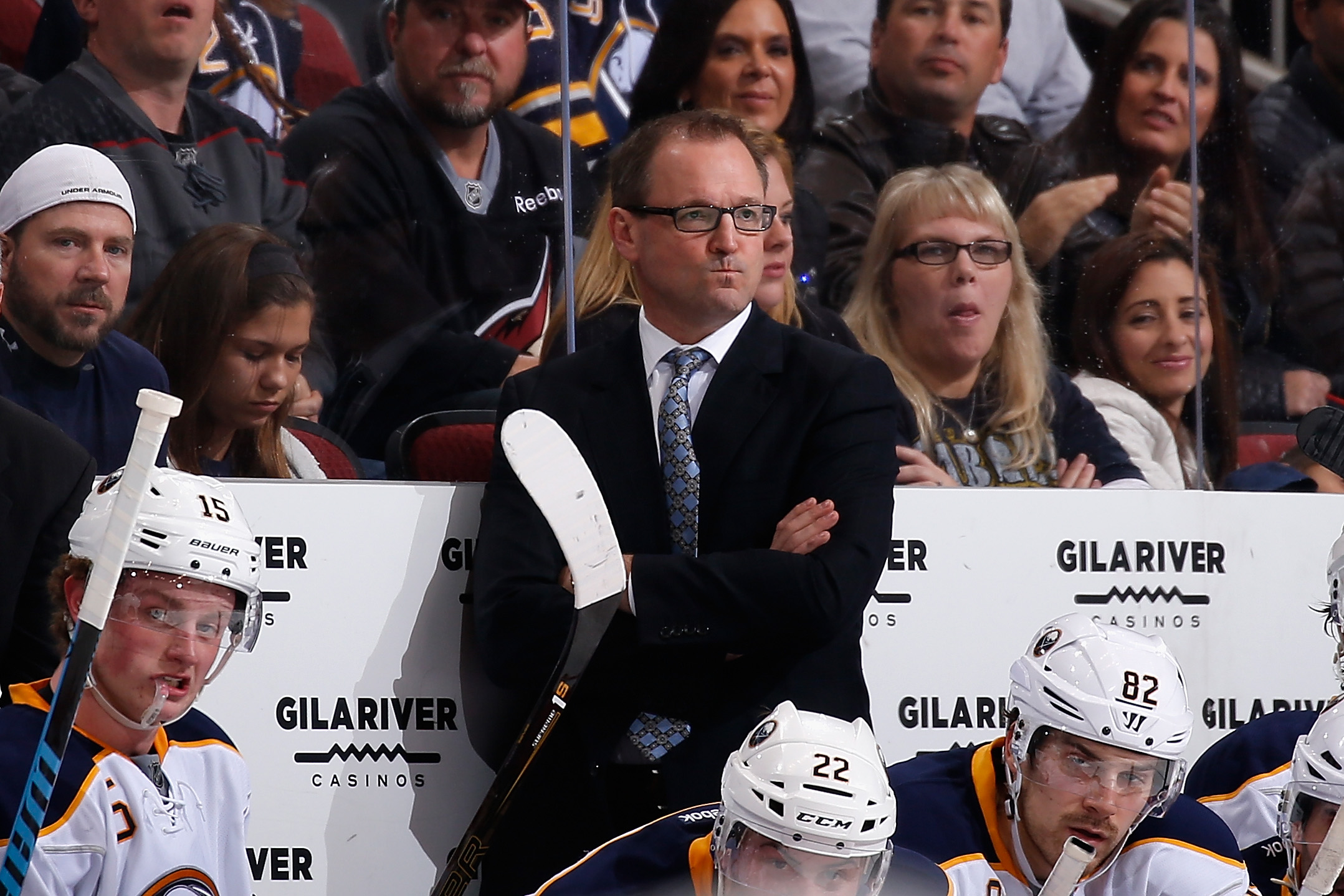 While you were watching the Sabres embarrassingly stumble in the season’s home stretch, you may have missed the battle lines being redrawn in a conflict that seemingly ended two years ago. To nearly everyone’s chagrin, the 2014-15 tank debate is back, the same sides arguing nearly the same point, the terms only slightly shifted. Where it was once WGR’s pro-tank (and, by extension, Pro-Tim Murray) forces against the Buffalo News’ anti-tank (and anti-Murray) brigade, it’s now… WGR’s anti-Bylsma (and, implicitly, pro-Murray) side against BN’s pro-Bylsma (and anti-Murray) side. Since this is Buffalo, the struggles of the team cannot be attributed to both Bylsma and Murray, even though it is pretty clearly both their fault.

It’s not really surprising to see the sides break down like this. If, like WGR, you believed that the tank was a work of genius, and the unimpeachably right thing to do for the Sabres, the best way to explain this season’s struggles is by blaming the coach who has held back the roster. If, like the columnists of the Buffalo News, you thought that tanking for one player wouldn’t bring the team back to the playoffs, and that it was an embarrassment to the league, then it’s pretty easy to blame the architect of the tank who has, so far, built a flawed roster. So, after every loss, you can see these lines of attack form; WGR busts on Bylsma’s system and his relationship to Jack Eichel, while BN columnists criticize the players for not working with Bylsma, and Murray for putting together such a shoddy D-corps – how could any coach succeed under these circumstances?

As with the tank debate, both sides embarrass themselves in their slavish devotion to their narrative, their dislike of the other media company stopping them from giving any ground towards the middle. Take, for instance, the Sabres’ 4-1 loss to the Sharks, a Stanley Cup contender. Jack Eichel scored an embarrassing own goal to go along with his 20th of the season and got fewer minutes than Zegmus Girgensons by the time the final horn sounded, leading to speculation that he may have been benched. Perhaps more importantly, the Sabres were massively outshot all game, ragdolled by a better team. WGR’s focus was on Bylsma benching his best player, while Mike Harrington tweeted this the day after, blaming the players:

Sure is. The ex-players aren't pointing fingers at the coach. https://t.co/bzmrXDxuvw

Maybe… just maybe… the roster that Tim Murray put together isn’t playoff quality yet AND Dan Bylsma’s current system isn’t doing the team any favors. Maybe Eichel is as good as advertised offensively AND still needs to work on his defense and concentration, somewhat straining his relationship with his systems oriented coach. Maybe the tank was a smart choice but also put the team’s roster in a hole that will take more time to crawl out of than some expected. The world is full of multitudes; the Buffalo media, generally, is not good at holding two conflicting thoughts at once, so I doubt you’ll see the main thrusts of these arguments change. You’ll occasionally see someone relent and say that, oh yeah, the other thing is a problem too, but the first and loudest reaction will stick to the prescribed script.

Let’s step outside silly media infighting for a second and focus on something more general: fan perception. According to my own observations, fans blame Bylsma for this season more than Murray, and with much more vitriol.

(If you think it’s otherwise, maybe I’m looking in the wrong places, but this is the sense I get.)

Murray has definitely lost some luster among the fans since the tank days – he hasn’t put together a good d-corps, and he failed to sell at the trade deadline. Still, he doesn’t get nearly the shrift that Bylsma receives every night for his line blending, his player deployment, his system, and his tendency to sit on leads and watch them blow up in his face.

A part of this difference in vitriol is the level of involvement: Murray just sets the roster, but Bylsma is the one who is tasked with implementing a winning system, so he’s easier to blame on a night-to-night basis. When the offense of this team is fully healthy and clicking on all cylinders, it can seem like the team is a juggernaut, flying around on the forecheck wreaking havoc and scoring goals, even if the defense is bleeding shots on the other end. So when the Sabres go 3-0 or 4-0 up and then fritter away the lead, the ire goes mostly towards Dan and his turtling rather than the guy who acquired the subpar defenseman who facilitated those goals against. I’m not saying that I love Bylsma’s strategy with leads – in fact, it’s one of the more frustrating things to watch in the world – but there is more to it than him simply parking the bus. It’s a combination of bad tactics and a flawed roster. But Bylsma gets the majority of hair pulling from the twitterverse.

In a weird way, the Bylsma/Murray dynamic is like a reverse of the Lindy/Darcy dynamic from the mid-2000s. (Props to Joe for thinking of this connection first.) Lindy was a fan favorite, a gruff, tough talker who occasionally gave out a memorable quote or threatened to beat the crap out of an opposing coach. Darcy, on the other hand, seemed meek, like a pencil pusher who didn’t have the cojones to make a trade to put the team over the top. During those teams’ heyday, everybody loved Ruff and wanted to wring Darcy’s neck.

Fast forward to today, and Murray is the fan favorite, with memorable zingers at press conferences and a reputation as a bold gambler: he orchestrated a shameless tank, got Eichel, and traded for Evander Kane and Ryan O’Reilly. Bylsma, on the other hand, is more reserved, giving catatonic post game interviews where he passive-aggressively goes after his players instead of blowing up. He seems passionless behind the bench, watching his team give up a late, game-tying goal with a seemingly blank stare. It adds to people’s frustration with him.

Fans want passion in their leaders, a personality, something to rally behind. Murray’s confident-but-also-nebbish-at-the-same-time personality hooked a lot of fans, just like Rex Ryan’s bravado did two years ago.

(Admit it, most of you were on board.)

As Rex Ryan learned, public opinion can turn pretty quickly on leaders with big personalities, but it definitely gives a longer leash than being a seemingly boring and levelheaded leader.

(So, Sean McDermott… good luck with your “process!”)

The contrast in Murray and Bylsma’s personality is, I think, one of the driving forces behind their differing fan receptions. It’s not a huge deal, but it is interesting to think about. Bylsma may be on a hotter seat than Murray due to it, but the coach usually goes before the GM anyway.

All I know is, without improvement next year –  serious playoff contention if not an outright playoff berth – both will be out of a job by the end of the season. No pressure, guys.