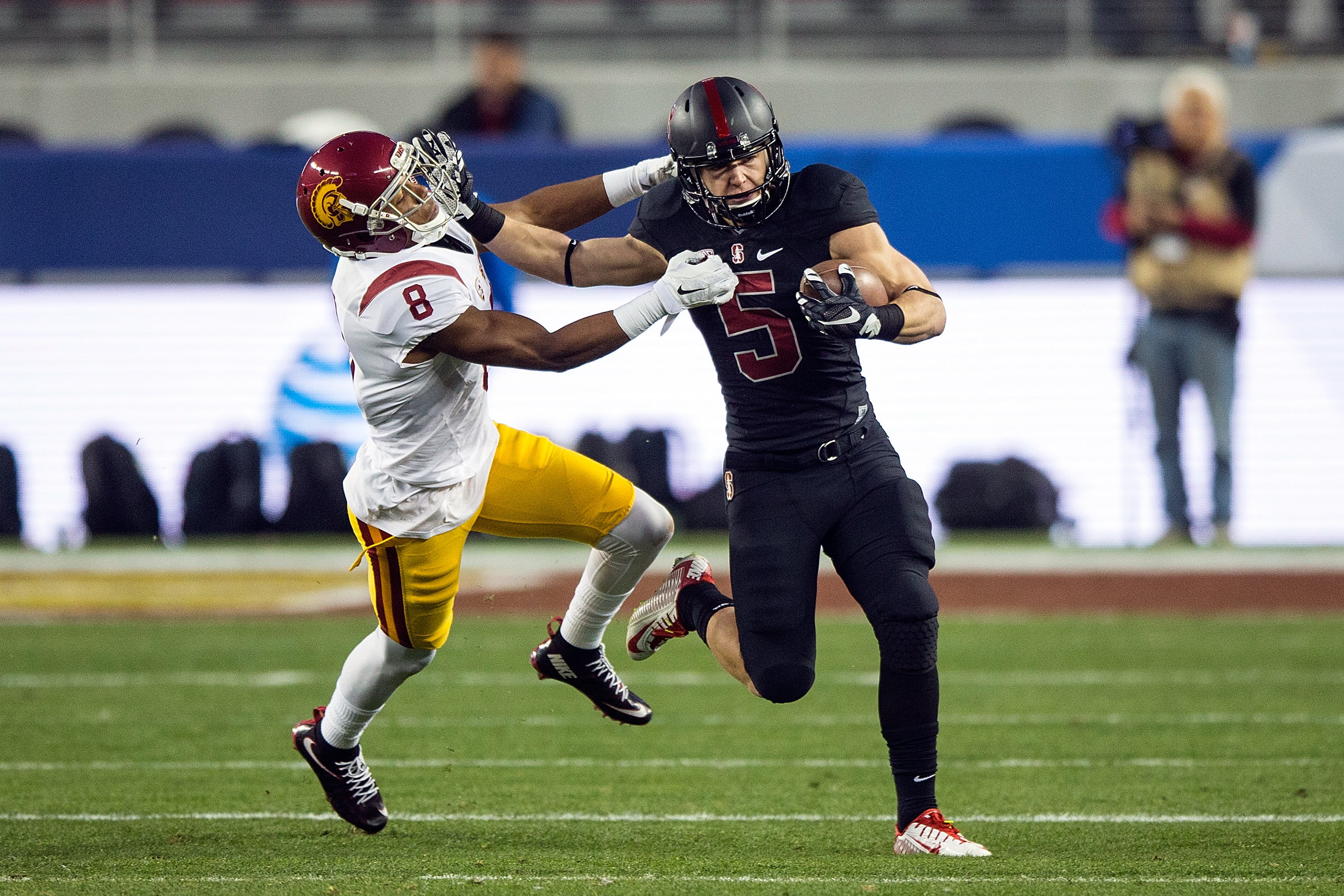 The first thing that absolutely jumps off the tape about Christian McCaffery to me is just how smooth he is. McCaffery has incredible balance, great feet, and a natural feel for space that you cannot teach or emulate. McCaffery led the NFL combine (among running backs) in the 40 yard dash, the 3 cone drill, and the vertical leap showing he has the athletic measurables that confirm what you see on tape. If you were rolling up a character (some of you will get this reference) and you min/max’d to agility it looks a lot like Christian McCaffery. What is great about McCaffery though, and what makes him a near perfect fit for the Saints is not his athletic profile, but his skill. McCaffery is not only incredibly fluid, agile, and explosive, but he’s a true weapon-x type player. He has shown the ability to run between the tackles, to the edges, to catch passes out of the backfield in the screen game, and to run routes to take advantage of linebackers and safeties in coverage. In my opinion there is no player in this draft, at any position, who more perfectly fits the Saints offense than Christian McCaffery.

His fluidity allows him to be a natural route runner and combined with his great hands this makes him formation versatile and the type explosive playmaker Sean Payton has consistently used to great effect in the Saints offense. He is strong enough to break tackles, but not in the same way as a Leonard Fournette who simply punishes his victims (how else do you describe them?), but by capitalizing on his agility he’s able to cause a lot of ‘glancing blows’ that he can run through or shake off arm tackles. He’s not a feature back in the traditional sense, but he IS a feature weapon. You can motion him out in 2-back sets, and is explosive enough, fluid enough, and skilled enough to be a threat from literally anywhere on the field. The greatest strength he has as a potential Saint isn’t just his versatility and ability to be a productive weapon for the team, but his ability to allow the Saints to dictate coverage to opponents. VERY few linebackers in the league can cover him one on one, and with the ability to draw and dictate attention by the opponent he creates the perfect type of ‘either-or’ scenario that Payton’s offense is built on. Making opponents have to pick their poison is the hallmark of Payton’s system, and one of the keys to great offense at the NFL level.

As I mentioned above McCaffery isn’t a traditional feature back. He’s about ten to fifteen pounds light of what I would call an ideal weight for the position and he’s not a power guy. He’s not necessarily weak, and his explosive measurable show he has a very strong lower body, but you need look no further than ten reps on the bench to know what his biggest weakness is. McCaffery is also a less than ideal pass protector (very few backs are great at this coming out of college), and his lack of great strength and weight further exacerbate that issue. He also tends to have a little bit of ‘Reggie Bush syndrome’ where he will continue to try to break a play out to the outside instead of picking a lane and taking what the defense gives him. While he’s explosive and he will be able to make highlight plays with regularity, there will likely be just as many plays where he gets -2 yards instead of 3. Losing 5 yards (net) consistently isn’t a great thing to have and that is something to consider when looking at him.

One of the biggest weaknesses and concerns with McCaffery though is his frame. It’s not just his lack of strength, functional or otherwise, but the sheer lack of girth playing in the NFL that has to concern you. McCaffery had a heavy workload at Stanford, and because he lacks the type of ‘thickness’ that you would ideally have at the position I do worry about him being constantly nicked up in the NFL. The problem that brings for a super-specialist like McCaffery is it can reduce his explosiveness. While he’s very ‘versatile’ by formation and usage, he isn’t versatile by how he wins in those situations. It’s always speed and agility, a dinged up knee, a tweaked hamstring, anything like that could reduce McCaffery from devastating to functional. Travaris Cadet is functional, McCaffery when healthy can be, will be, and should be special…but can he stay healthy?

First of all let’s get this out of the way right now, if Christian McCaffery is there at 32 (provided the Saints still have it) I walk up to the podium, put in his name, and go home happy. Period. In a vacuum I love the idea of Christian McCaffery in Black and Gold, and even outside of a vacuum I love the idea of McCaffery playing for the Saints. With the trade of Brandin Cooks you can now double both his fit here, and my desire to see him on the team. The Saints need a player who draws coverage, brings an explosive element to the offense and makes big plays. Michael Thomas is awesome and he’s great at a lot of things, but he hasn’t shown himself to be an explosive playmaker yet. That is a needed component for the offense in the short term and the long term, and his added value of being a great returner is the cherry on top. I wouldn’t touch him at 11, but I’d be willing to take him anytime after that.