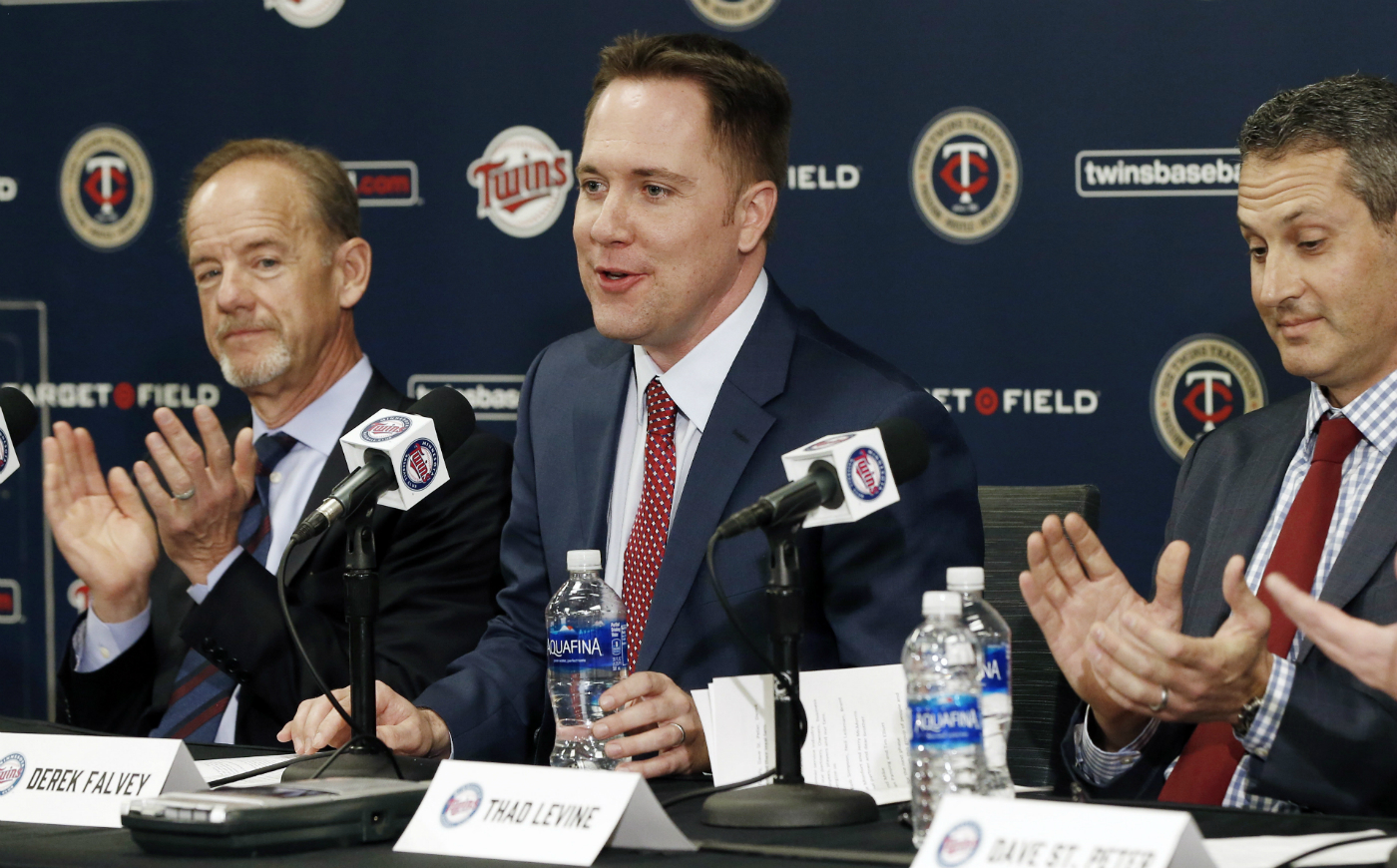 The Minnesota Twins had to wait until after the World Series concluded to make it official, but they ushered in a new era when they named Derek Falvey the Chief Baseball Officer, a title that is equivalent to the functions of a general manager.

Falvey, the former assistant general manager to Chris Antontetti, represents major change for the Twins organization, going from the 62-year-old, old school, highly experienced Ryan to the 33-year-old, new school, inexperienced Falvey. The organization needed it, though, following the worst season in team history and a fifth season with 90-plus losses in the past six years.

The Twins unsuccessful attempts to interview ex-general managers Alex Anthopoulos and Ben Cherington made headlines and Falvey was rarely portrayed as the front-runner throughout a process aided by the Korn Ferry search firm. In the end he beat out, among others, Rays vice president of baseball operations Chaim Bloom, Cubs vice president of player development and amateur scouting Jason McLeod, and Royals assistant general manager J.J. Picollo.

Falvey became baseball’s second-youngest “general manager” behind only David Stearns, whom the Brewers hired as general manager last offseason. Stearns, ironically enough, also spent time in the Indians front office in 2011 and part of ’12.  Falvey’s rise has been rapid, going from Indians intern to Twins boss in just eight seasons, and Falvey held the assistant general manager title in Cleveland for less than one year. His youth and lack of experience running an organization will no doubt be second-guessed and certainly present risks, but there’s a very similar story in Twins history that turned out pretty well.

Carl Pohlad bought the Twins from Calvin Griffith in 1984, at a time when the franchise was in dire straits. Two years later Pohlad shook up the front office by naming Andy MacPhail as general manager. MacPhail had been the assistant GM in Houston for a short time, and both his father Lee MacPhail and grandfather Larry MacPhail are Hall of Fame executives, but Andy was 32 years old with no real experience running an organization. The local media nicknamed him “Boy Wonder” and it was hardly meant as a compliment in that era.

Falvey shouldn’t be compared to MacPhail simply by virtue of age and inexperience. However, the task in front of him is similar to the one MacPhail faced and eventually won the World Series (1991).  Jim Pohlad hired Falvey for many of the same reasons his father hired MacPhail; after two decades of limited success and increasingly out-of-touch leadership at every level, the stale organization desperately needed “a new, fresh, young look, and somebody who wouldn’t get caught up in old thinking.”

MacPhail took over a team that had plenty of young building blocks in place, including Kirby Puckett, Kent Hrbek, Frank Viola, Gary Gaetti, Tom Brunansky, and Greg Gagne. He made a few veteran pickups that proved crucial in 1987, but they were relatively low-wattage moves. For the most part, MacPhail let the talent already on hand develop, aiding the process by hand-picking 36-year-old Tom Kelly as the new manager and overhauling the coaching staff, scouting department, minor-league instructors, and front office.

Falvey also has plenty of young building blocks in place, including Miguel Sano, Byron Buxton, Max Kepler, Jorge Polanco, Eddie Rosario, and Jose Berrios. There’s precious little MLB-ready pitching talent thanks to a decade of poor drafting and the inability to develop bat-missing starters, but there’s essentially already an above-average lineup set and Falvey’s resume with the Indians was built on acquiring and developing arms. Plus, in June the Twins can add a high-upside starter with the no. 1 pick in the draft.

Falvey’s task is a difficult and complicated one, but there are three key points. First and foremost, he must bring the organization into the modern era of analytics, scouting, and any number of other areas in which they’ve fallen behind in resources, brain power, and sheer number of staffers. Beyond that, he has to find a way to fix a pitching staff that has been the worst in the league for six years without showing any real sign of progress. And once he does that, he has to construct a sustainable contender despite payroll limitations.

Accomplishing those tasks is hard enough and will become even steeper hills to climb if ownership can’t keep their hands off, so hopefully Pohlad follows in his father’s footsteps by allowing the organizational leader he hired to do his thing, full stop. Falvey’s title will likely be president of baseball operations, as the Twins felt restructuring their front office hierarchy was a must after relying so thoroughly on Ryan as traditional GM. That means Falvey will be—or at least should be—able to hire a GM and other key assistants to work under him.

Falvey’s leadership ability remains to be seen, but his baseball mind is sound, modern, and skilled as he learned from the best. Along those same lines, Indians manager Terry Francona, who has worked with Falvey since 2013, was effusive in his praise when asked by the Cleveland Plain Dealer:

“If you’re asking me what Derek does, it would probably be better to say what he doesn’t do. He does everything. When I first came here, he was helping me interview pitching and hitting coaches. … We kind of got to know each other that way. I found out quickly that he had his stuff together. Over the course of time, because he’s a hard-working kid, he made it his passion to understand pitching and the delivery. We go to him a lot with questions. If he doesn’t have the answer, he’ll go find it. He’s a great resource for the coaches. … He’s a rising star in my opinion. I don’t think you’re going to talk to anyone around here who’d say he isn’t.”

For a 57-year-old baseball lifer and two-time World Series-winning manager to say that about a 33-year-old “boy wonder” shows why the Twins were impressed by Falvey and why, for the first time in a long time, Twins fans have reason to be optimistic about the future of the team for reasons related to the organization’s talent on the field and in the front office.

There might have been a few pitchers in the American League that would have had an emotional meltdown amid the second-worst run support in the majors, but veteran righthander Ervin Santana somehow maintained a sunny disposition throughout a 7–11 season that saw him finish 10th in the American League with a 3.38 ERA. Now 34, Santana has two years (plus an option) left on his contract, but the Twins seem intent on keeping him for now to front baseball’s worst rotation. Southpaw Hector Santiago, acquired at the Aug. 1 trade deadline in a swap with the Los Angeles Angels, reversed a miserable four-start introduction with the Twins and should prove a valuable innings-eater, if nothing else, as he enters his walk year. Sinkerball specialist Kyle Gibson still doesn’t miss many bats, but he’s solid on and off the field. Veteran Phil Hughes is coming off a double whammy of a broken leg and surgery to correct thoracic outlet syndrome, but he’s expected to be ready for spring training. The final rotation spot could fall to one of several young righthanders: Jose Berrios, Tyler Duffey or Trevor May. Berrios, shelled to the tune of an 8.02 ERA in 14 starts as a rookie, enters as the favorite.

Journeyman Brandon Kintzler was a revelation after stepping into the closer’s role in mid-June, nailing down 17 of 20 save chances. He could open 2017 in that same capacity as three-time All-Star Glen Perkins tries to work back from shoulder surgery in late June. Setup man Ryan Pressly opened eyes with his improved velocity, and rookie Taylor Rogers made a successful conversion from minor-league starter to situational lefty in the majors. Hard-throwing righties J.T. Chargois and Michael Tonkin remain to take up the slack if May earns one of the starting spots.

Thirty-three of Dozier’s homers came in a dizzying span of 73 games that started on June 25 at Yankee Stadium and carried through Sept. 14 at Detroit’s Comerica Park. Entering his age-30 season, Dozier knows he still must prove himself to a legion of skeptics, but the fact remains he has averaged 28 homers over the past four seasons since making the permanent switch from shortstop. He probably doesn’t get enough credit for his defense, baserunning and leadership, so any decision to deal him with two years left on his contract must be taken quite seriously. Switch-hitting Jorge Polanco has excellent plate discipline at 23, but his defensive skills, especially his arm, profile better at second than short.

It took a hamstring strain to liberate Miguel Sano from an ill-fated experiment in right field, but the rust was apparent once he returned to his natural spot at third base. A late-season flare-up in his surgically repaired throwing elbow proved no cause for lingering concern, so the Twins opted to cut ties with incumbent Trevor Plouffe as he entered his final year of arbitration. Joe Mauer, who turns 34 in April, struggled to stay on the field over the final six weeks due to a quadriceps strain. Unable to maintain a sizzling start, the six-time All-Star figures to see increased time as the designated hitter.

Scouts always caution against reading too much into September stats, especially when a team is out of the playoff race, but Byron Buxton hit as if the light finally went on in his fourth crack at the majors. His defense in center field was every bit as impressive as expected, but he was still getting the hang of basestealing at the highest level. Fellow rookie Max Kepler had the opposite experience, sagging over the final six weeks after showing a surprising power stroke across the midseason portion. Lefties continued to trouble him, so it’s possible switch-hitting reserve Robbie Grossman could spell him more frequently in 2017. Free-swinging Eddie Rosario, who endured a difficult sophomore season that included a six-week demotion to the minors and a season-ending thumb injury in September, returns in left.

Castro doesn’t have to be Pudge Rodriguez in his prime to make an impact on his new club. The ability to throw out runners and frame pitches should make him a clear upgrade over predecessors Kurt Suzuki and Juan Centeno, both of whom struggled on the defensive side. Castro’s lefty power (13.5-homer average over the last four seasons) should come in handy as well for a team that ranked in the bottom seven in slugging and isolated power against right-handers by lefty hitters. John Ryan Murphy’s pitch framing ranked as the minors’ best over the four months he spent at Rochester.

Byung Ho Park’s debut, which ended in August surgery on his right hand, was considered a disappointment, but he still hit 22 homers in 93 games between the majors and Triple-A Rochester. Grossman, picked up off the scrap heap in mid-May, showed the ability to pound lefties even as he had his share of woes in left field. Veteran utility man Eduardo Escobar, who failed to hold the Opening Day job at shortstop in 2016, was brought back as insurance up the middle. Speedy switch-hitter Danny Santana remains, but the bulk of his sporadic playing time now comes in the outfield.