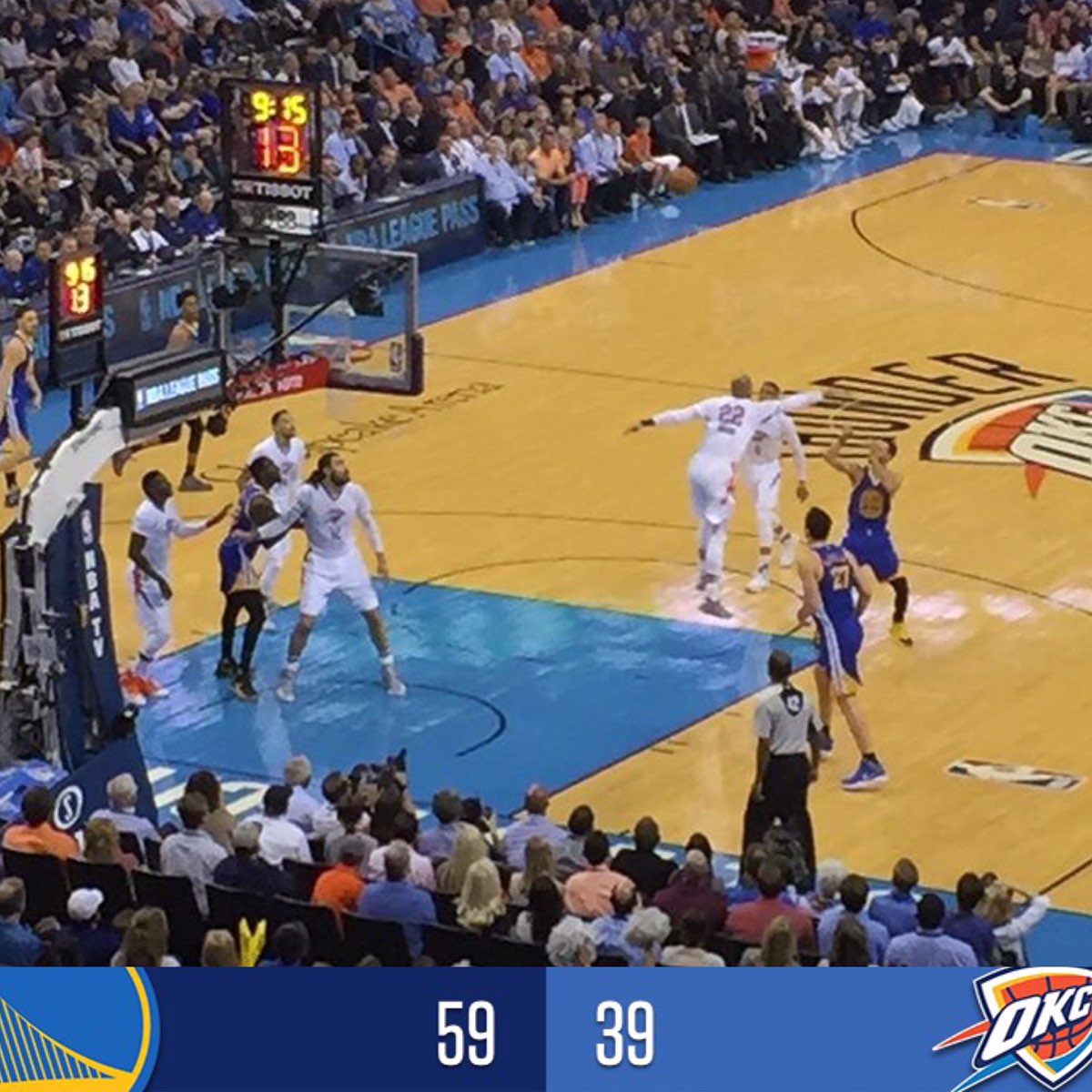 Two nights after defeating the Bucks at home, the Golden State Warriors (55-14) embarked on a back-to-back road trip starting with the Oklahoma City Thunder (40-29).

The Warriors were without Kevin Durant (left MCL sprain, left tibial bone bruise) and Damian Jones (D-League assignment), but recalled Kevon Looney from the D-League for the road trip.

Q1: Splash Is Definitely Back

The Thunder drew first blood and started running downhill, picking up the pace. Steven Adams hit their first shot inside, Draymond Green had to throw up a prayer to beat the shot clock, and Russell Westbrook threw a court-length pass to Victor Oladipo on the miss, who then found Taj Gibson for a two-hand smash.

But Stephen Curry came back with a three, then struck again from the right wing later after a series of empty possessions which featured Green disrupting a couple shots inside by Gibson:

Westbrook then pounded the rock too much, Draymond and Klay Thompson converged, tapped the ball out, and Curry got a breakaway two-hand slam:

Later, on a bad pass by Zaza Pachulia to Patrick McCaw as McCaw zigged when Pachulia thought he would zag, Green and Zaza yelled at each other from across the floor, but that was soon forgotten.

Pachulia hit a tough banking fade inside against Adams, then disrupted a Westbrook attack, and Thompson found Steph in transition for the extra pass and splash from the left corner, giving the Warriors a 13-12 lead.

A couple possessions later, Klay got a fast break lefty to count as Andre Roberson goaltended off the board, then got into the action from beyond the arc as he drew a foul on Westbrook after drilling a triple:

But Enes Kanter put back a missed trey by Alex Abrines and Golden State head coach Steve Kerr didn’t like what he saw and called timeout with 4:22 remaining and the Warriors holding a 19-16 lead.

Out of the timeout, Andre Iguodala found JaVale McGee for an alley-oop:

Steph missed from downtown, having missed an early pull-up from way deep earlier in the quarter, but after Abrines missed another triple, Curry ran the break, got a lead pass from Iguodala and tapped the ball back to a trailing McGee.

JaVale did well to handle the sudden dish, and he put the ball in with a great degree of difficulty, showing off some impressive dexterity.

The quarter ended with a nice Semaj Christon drive down the left side, Matt Barnes missing a three, Steph not seeing Draymond open on the baseline inbound and, instead, throwing the ball away, which led to a run-out by Roberson.

But Klay gave chase and fouled Roberson, and Roberson airballed the first free throw then bricked the second:

Curry ended up not being able to get an inbounded heave from near half-court off, and the Warriors took a slim 25-22 lead after one.

Thompson hit a spinning, fading move early on, then David West drew a foul but OKC was already in the penalty with 8:00 to play.

Ian Clark did well to stop and attack, and Barnes ended up with a steal, led the break, and dished out to Klay on the right wing for a three:

Later, West and Clark got crossed up and West threw the ball away, similar to Pachulia and McCaw earlier in the game, but after Westbrook missed another drive on Thompson, which was happening frequently, Draymond made an extra pass to Clark, who hit a nice runner.

Barnes drew a series of free throws, ran the break on a miss inside by Gibson, which led to a lefty layup dished by Iguodala, and the Warriors streaked ahead, 44-31.

Barnes added an assist to Curry in the corner…

…then later missed a triple from the corner, but Curry swiped the ball from Westbrook on the exchange and Iguodala swooped in for a one-hand jam:

As the quarter came to a close, Green found Klay for a layup, then Thompson got another layup in similar fashion from a baseline inbound, and Iguodala blocked Gibson and forced a jump ball.

While positioning for the jump, Christon and Curry got their arms tangled up and Christon shoved Steph, who shoved back, and a bunch of players converged with Gibson holding off Curry. Westbrook also came in to shove Steph after the initial melee between Christon and Curry:

The altercation was reviewed, technicals were assessed to Christon, Curry, Westbrook and, of course, Green.

Iguodala managed to tip the ball to Klay in front of the OKC bench. Thompson saved the ball, threw a beautiful overhead pass up to Steph streaking down to the Warriors’ hashmark, and splashed the triple at the horn, giving the Warriors a 59-39 lead at halftime: