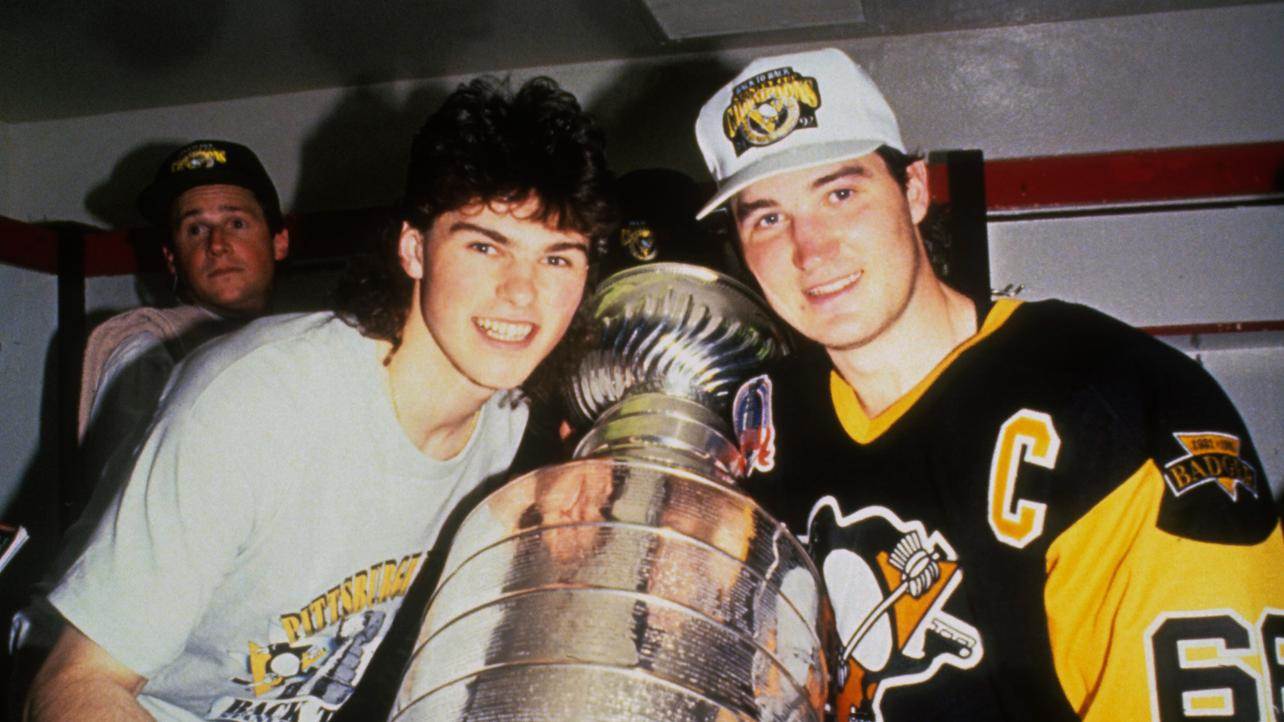 Before addressing Jaromir Jagr, a word about Sidney Crosby’s weekend: New Jersey and Florida probably had some defensive strategy they thought might work but seriously, in reality, they had an almost negligible chance at stopping Crosby, analogous to these assassins thinking they might break into this safehouse, but end up being blown away at the door.

The Man of Salutes received a salute from the team on which he starred for the first eleven seasons of his distinguished career in honor of his inclusion on the NHL Top 100 Players list. Yesterday at PPG Paints Arena, the Penguins played a one-minute tribute video on the arena videoboard during the first TV timeout of the game, and just maybe, the city of Pittsburgh finally made peace with Jaromir Jagr.

In what should have been the start of a resurgence for the Penguins, the 2000-01 season would be viewed in hindsight as the end of an era – the Jaromir Jagr era – in which Pittsburgh never failed to qualify for the playoffs. Despite Mario Lemieux’s return, helping Jagr capture his fourth straight scoring title and fifth in his career, an unhappy Jagr asked twice to be traded during that final season in Pittsburgh, famously declaring “I feel like I’m dying alive. … I don’t feel comfortable here right now. It’s not the same for me right now. We’ll see what happens. Maybe I’m going to think about retirement pretty soon.”

On July 11, 2001, Pittsburgh traded Jagr and the $20.7 million remaining on his contract to Washington, and the Penguins franchise began a painful, rapid descent to the bottom of the NHL. Four straight seasons without a playoff berth followed the trade. Whether it was fear and frustration within the fanbase over the team’s uncertain future in Pittsburgh, the terrible quality of play, media influence or simply the final, frozen, sad image burned into our minds of Jagr’s last days in Pittsburgh – once so happy and effervescent – reduced to sullenness and withdrawal, #68 suddenly became the villain, the turncoat, the mercenary to many eyes, and many fans unleashed boos and vitriol toward Jagr every time he visited Mellon Arena and the current building.

In the spring of 2008, as a new crop of young, exciting Penguins steamrolled Ottawa and New York in the first two rounds of the playoffs, it seemed fitting that Jagr, whose contract with the Rangers was ending and hinted at playing his remaining days in Europe, should finish his NHL career on Mellon Arena ice, the day Marian Hossa’s overtime goal eliminated Jagr and the Rangers.

Yet, three years later, the 39-year old Double J hinted that he still had plenty of hockey left in him and wished to reverse-repatriate himself back to North America. Pittsburgh slowly warmed to the idea of a storybook reunion with their former favorite son after examining some of Jagr’s springtime musings about where he might like to play. “Maybe Pittsburgh. I don’t know. Maybe Montreal. Maybe New York. Pittsburgh, I played there for a long time. Mario is the owner. It’s better to play with great centres like (Sidney) Crosby and (Evgeni) Malkin, (then) this game is a little bit easier and I’m not young anymore. I would like to score some goals, empty-netters with those guys and it’s a lot easier,” Jagr said, shortly after the 2011 World Championships.

The Pensblog, always at the forefront of all things Penguins, created and led #Jagrwatch, the round-the-clock vigil monitoring Jagr’s every movement, which gave the world the inimitable #Jagrwatch GIFs from Stephen S., plus an exclusive, brief Jagr status update on the phone from his inexplicably jammed-up agent, Petr Svoboda.

But it all ended on Free Agency Day when Jagr took the highest offer, a $3.3 million 1-year deal from Philadelphia.

Thousands in Pittsburgh cut themselves.

Many burned Jagr jerseys in their backyards.

This writer in a fit of rage, created this:

Admit it, you too were extremely offended and took it personally, wondering why, of all the teams Jagr could have signed with (not named the Penguins), he had to choose the arch-rival? Why Jaromir, why?

It hurt even more when Jagr, Max Talbot and the Flyers triumphed over the Penguins in the Great Meltdown of 2012.

One year later, when Jagr and Boston swept the Penguins in the Great Bylsma Misuse of Iginla 2013, all of Pittsburgh was too numb to express much beyond instinctual hate and booing towards Jagr, probably because “hey, that’s what we’ve always done for the last decade and we have to hate someone.”

But as Jagr entered his forties, and switched teams in an oddly nomadic pace, the man who was once criticized as a flashy, mullet-wearing, saluting hot dog, inexplicably unappreciated for his talent and greatness in his youth, suddenly became the beloved, wizened, eminence grise of the NHL. Traditional and advanced statistics vindicated him as one of the best players of all time. As he moved ever higher on the all-time list of scorers, achieving things that no player in his forties besides the late Gordie Howe could, media and fans inside and outside Pittsburgh warmed up to him, cheered him, and properly respected him.

How can anyone in Pittsburgh who saw his goal in Game 1 of the 1992 Stanley Cup Final hate him?

How can anyone in Pittsburgh who saw his game-tying and overtime-winning (and possibly franchise-saving) goals in Game 6 of the 1999 Eastern Conference Quarterfinal hate him?

To hate greatness … is that not the very essence of sheer stupidity?

And so it was that back in October when Florida last skated through Pittsburgh, the Penguins made a small but telling symbolic point when they gave him a token of appreciation in the form of a plaque created from repurposed Mellon Arena roof steel.

By yesterday afternoon, many Penguins fans who filed into the arena, could reasonably sense that this might be the final time Jaromir Jagr skates on Pittsburgh ice. No better time than the present to give him his due. The warm, prolonged standing ovation spoke volumes, of forgiveness and of reconciliation.

No more resentment at things past; no more lemming-like booing and braying. Only appreciation for one of the greatest hockey careers of all time. How fortunate we were to see eleven of his seasons in Pittsburgh.

Play forever, Jaromir. Do not go gentle into that good night… Rage, rage against the dying of the light.