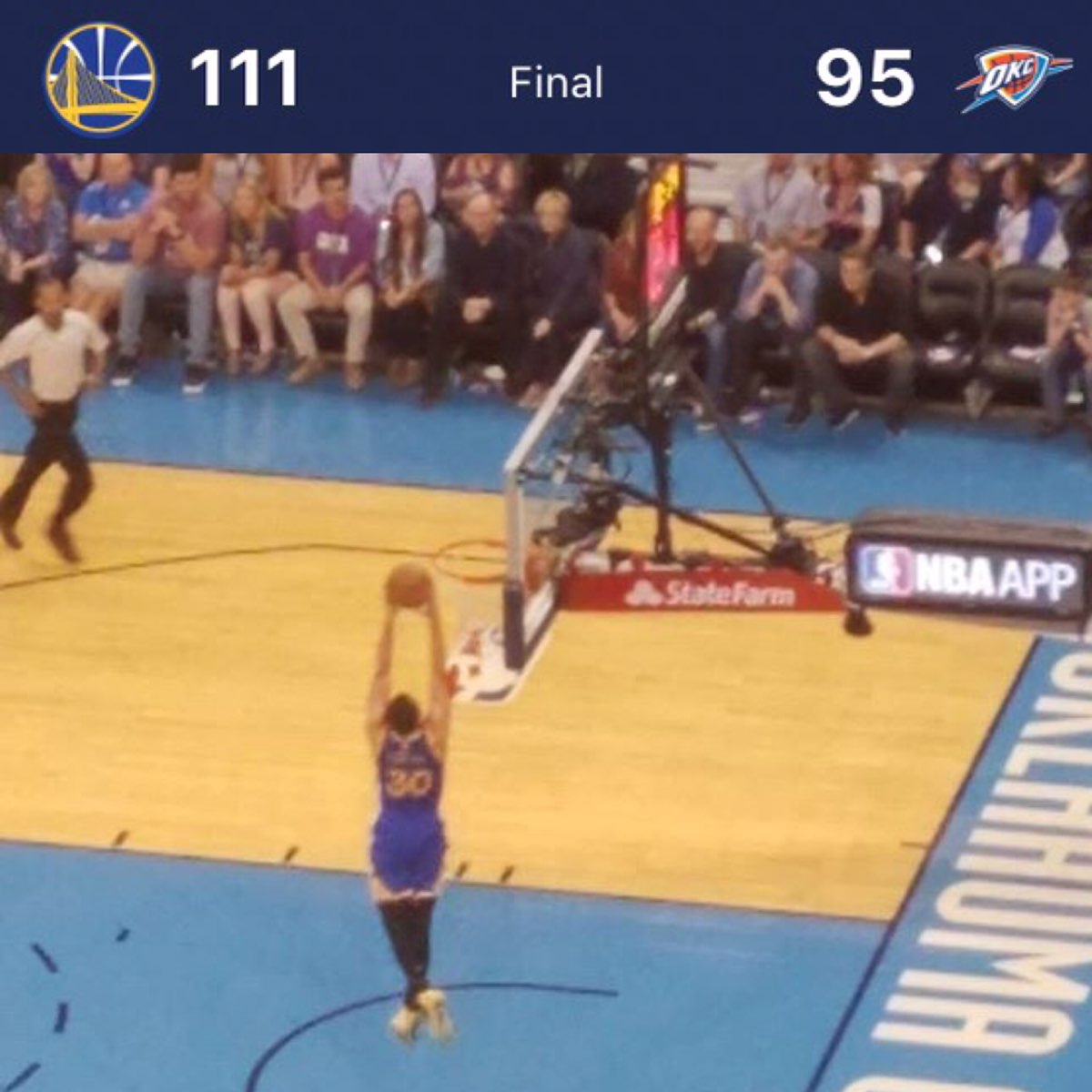 This is a continuation of the halftime recap of the Golden State Warriors at the Oklahoma City Thunder.

Q3: Fire Up The Klay-Pot And Add A Little Curry

Klay Thompson started off strong again, with a jumper and a right-corner triple…

…but Russell Westbrook finally found a rhythm and drew three free throws on Stephen Curry, although Steve Kerr marched all the way up towards half court, not happy with the call.

Draymond Green then missed a driving dunk, and Westbrook ran pick-and-roll with Steven Adams, then pulled up from the top over Green for a triple.

That brought the Thunder back to within 64-52 and Kerr called timeout with 8:57 remaining.

Out of the timeout, it was the unsung heroes that turned the tide. Patrick McCaw found JaVale McGee for a nice jump-tip-shot, for lack of better words.

Later, Draymond bodied up Taj Gibson and McCaw came over for the swat. Pat got rewarded at the other end with a trey, and the Warriors were back up big, 69-52.

A couple possessions later, Westbrook lost the ball, then got entangled with Curry’s ankle, but Steph only limped for a bit, then was alright, and in the transition, Klay missed from up top, but Green got the board, threw back out to Curry, then started celebrating by not even rebounding.

…the Warriors took a 72-55 lead with 6:08 to play, OKC head coach Billy Donovan called timeout, and Draymond continued his trot to the Golden State bench.

Out of the timeout, McGee tapped out a miss and Klay hit a three from the right wing, then Steven Adams lost the ball inside, Curry missed a three, but McCaw got the offensive rebound and found Thompson for three more, forcing Donovan to call another timeout as the Warriors pushed their lead to 78-55 with 4:51 to play.

Andre Roberson made a ferocious putback two-hand smash on a missed three by Westbrook, but that would be a rare highlight for OKC.

Klay went backdoor on a feed from JaVale, drew two free throws, then got another splash after McGee blocked Alex Abrines and Andre Iguodala attacked:

That gave Thompson eleven straight points scored for the Warriors.

Later, Steph found JaVale for a lob and alley-oop…

…then after Enes Kanter missed a baseline jumper badly, Curry went with a lefty overhead lob this time to McGee for another jam.

Closing out the quarter, Victor Oladipo did well to feed a nutmeg pass through JaVale’s legs in the paint for an easy reverse by Kanter, but Steph got the last word yet again as he got switched onto by Kanter, then crossed him up for a step-back triple with 0.4 seconds to go, giving the Warriors a 92-66 lead heading into the final frame:

Before heading to the bench, Klay hit another jumper, although he missed two treys, to finish with 34 points on 12-for-21 shooting, to go along with seven threes, the same number as Steph.

Ian Clark came in and got a bucket, so did Shaun Livingston, although he then committed to very bad passes to the other team, and after a two-hand jam by Jerami Grant with 6:00 to go, Warriors head coach Steve Kerr called timeout with the Warriors up comfortably, 104-82.

Looney got a basket inside, McAdoo swatted Kanter, then made a spinning banker against him, but missed the next spinning fade against Grant, and the Warriors ended up winning by the final score of 111-95.