Your Morning Dump... Where the Wizards are rivals because the Sixers, Knicks and Lakers stink 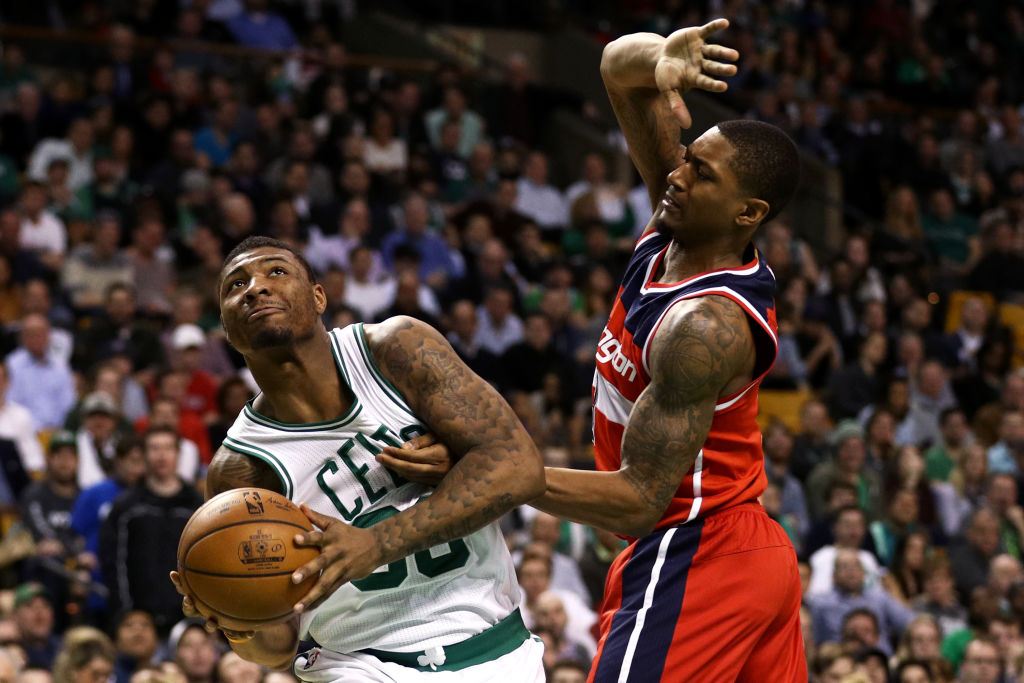 Your Morning Dump... Where the Wizards are rivals because the Sixers, Knicks and Lakers stink

Recent meetings have featured flagrant fouls, nose bops, a police presence and one team wearing all-black funeral attire. Here’s an FAQ to help explain how Celtics-Wizards has emerged as the NBA’s most chippy and unexpected rivalry.

Chris Forsberg has a thorough writeup of the rivalry that’s popped up between the Celtics and the Wizards.

It’s not a particularly glamorous rivalry, but c’mon, look at the rest of the league. Boston’s traditional rivals are terrible (and yes, I’m well aware that the Sixers won on Sunday; too bad they’re still like a hundred games under .500 in an 82 game season).

The Celtics are a team of guys with chips on their shoulders–for better or worse, they’re going to end up irritating another team loaded with players who also have chips on their shoulders. This year it’s the Wizards. Will that carry over to next year? Maybe. But part of me thinks this might be a high-water mark for the Wiz, kind of the way last year was for Charlotte.

Page 2: Where Danny wants the guys to bury the hatchet

Rajon Rondo uncovered old wounds when he told The Undefeated’s Marc Spears this week that not only is he planning an overseas reunion of the Celtics’ 2007-08 NBA championship team, but that Ray Allen isn’t invited.

The lingering bitterness regarding Allen’s departure for Miami in the summer of 2012, after the Celtics’ loss to the Heat in the Eastern Conference finals, has been expressed before, most notably by Rondo and Paul Pierce. The latter, to this day, says he hasn’t talked to Allen since the end of the 2011-12 season.

Danny Ainge, who built that team, wishes everyone could get along again.

“Ray not getting invited to a reunion of that team would be like me celebrating the 1986 title without Kevin McHale. It seems silly,” the Celtics president of basketball operations said yesterday. “We got where we got because of Ray. He was an important part of that team’s success.

“You just hope that time heals all wounds.”

Okay, this is basically why Rondo is where he is right now. The guy is a genius in many respects, but my goodness, he doesn’t seem to have any common sense–or any awareness that he’s without common sense.

Rondo wants to organize some overseas ‘reunion’ trip, well fine. Have at it. His group wants to leave Ray Allen out of it? Fine. There’s nothing requiring guys to hang out with guys they don’t particularly care for.

But boy is it stupid to publicly reveal that you’re doing this.

It serves no useful purpose whatsoever.

I don’t think Ray’s number should be retired, but you know what? Danny’s right. You gotta let the personal animosity go at some point. If this was anything other than a game, people would look at you goofy if you were still nursing grudges from five years back, but because this involves something that is played, it’s okay to refuse to let bygones be bygones? C’mon guys, it’s a game. I know this attitude puts me somewhat at odds with Chuck, but I’m not saying these guys have to become BFFs and vacation together, but at least stop making such a big dang deal about not liking someone.

Page 3: Where everybody’s healthy. For now

The idea coming into the season was that adding Al Horford to the mix of returning Celtics Avery Bradley, Jae Crowder, Amir Johnson and Isaiah Thomas would make for a strong starting lineup.

The idea turned out to be a good one — as the five won three-quarters of their games starting together heading into Monday night’s contest against the Washington Wizards. The biggest problem has been that that union had existed for only 28 of the team’s 70 games entering Monday night.

With the return of Thomas, after missing the previous two games with a knee bruise, the Wizards game marked the 29th start together for the so-called preferred starting five that was 21-7 in its first 28 collective efforts.

“We need it,” Thomas said before the game. “We need the reps. For as many games as possible, we need to play together. These last 12 games are very important for that.”

It’s crazy to look at how rarely this 45 win team has had its preferred starting lineup: 29 games out of 71. That’s not even half; in fact, it’s not even particularly close to half.

Boston doesn’t need to rest their starters, they need to rep their starters. I mean, it’s gotten to the point where I just sort of expect that someone’s going to be out within a few games of everyone getting back together. In fact, let’s make this interesting. Put your pick in the comments

Finally: Everything wrong with Boston’s sports commentariat in a single tweet

Wait. You mean he … passed? https://t.co/VDxzjgiihi

First of all, this is a dig at IT.

So, what are IT’s stats? He averages 6.0 assists per game. That puts him right in the middle of the league’s starting PGs. He’s an average passer.

So Mazz is flat wrong in criticizing IT’s willingness to pass to a shooter. While he’s not an exceptional passer, it hardly qualifies as a flaw in his game.

This establishes that Mazz doesn’t know what he’s talking about.

Mazz isn’t watching the game either.

So you have a guy who is uninformed and who isn’t watching the game.

Yet, he will get paid later on today to tell people what he thought of the game.

Furthermore, he will act insulted and offended if anyone suggests that he is, perhaps, LESS qualified to comment about the Celtics than some of his listeners.

There are plenty of people in Boston who think they could be a better GM than Danny Ainge. I don’t believe that for a minute.

On the other hand, there are plenty of people who also think they could do a better job talking sports than Mazz. Insofar as Mazz is oblivious and content to remain so, I suspect many of them are correct.

CSNNE: Thomas on Wizards: ‘Those guys don’t like us, we don’t like them’ | Beal ‘wouldn’t call it a rivalry’ between Celtics and Wizards (heh, this from the guy who called for the “Funeral” at the last game, now he’s trying to out cool Jae)