Recap and Thoughts from the 2017 Women's Frozen Four 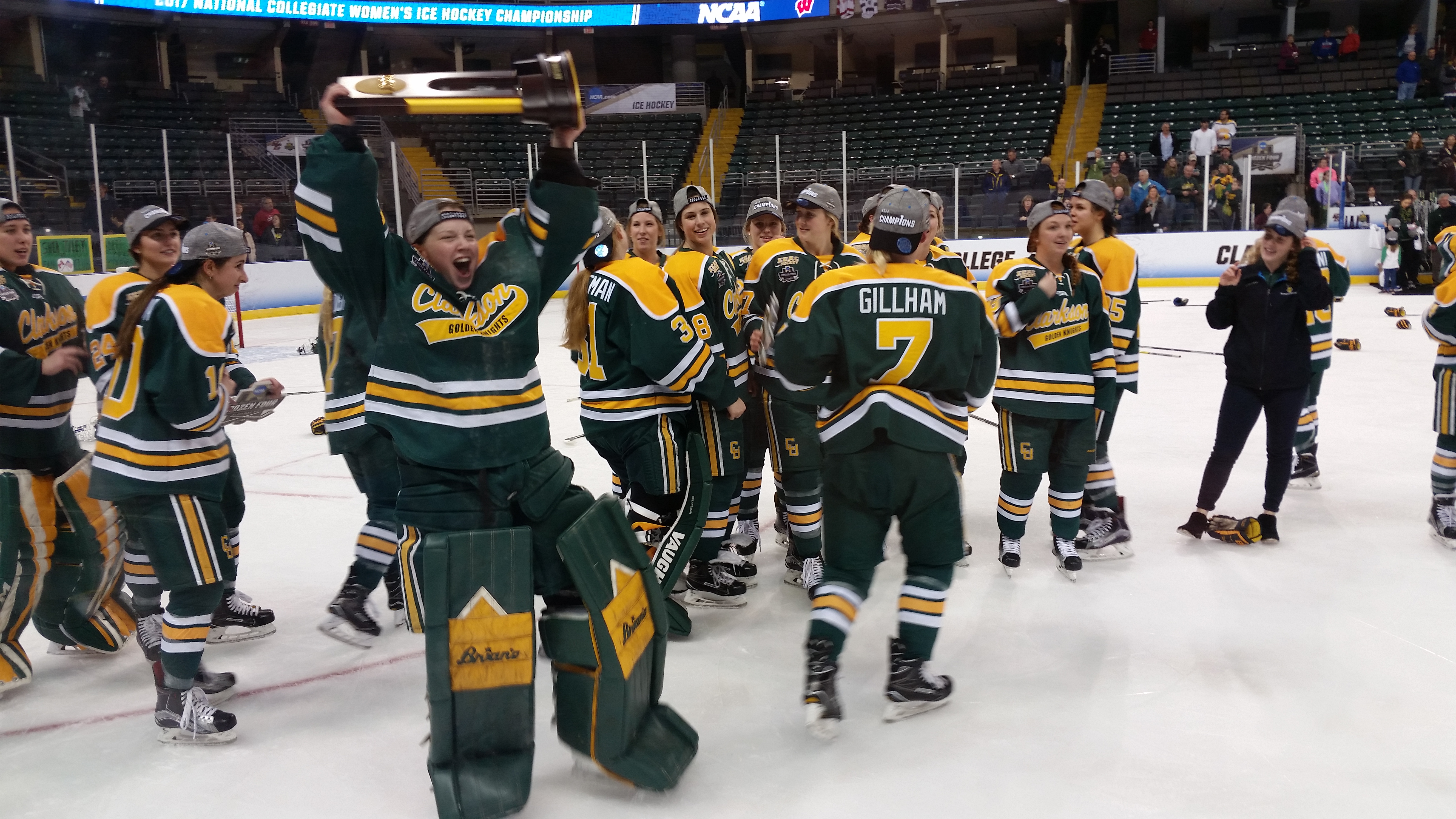 Recap and Thoughts from the 2017 Women's Frozen Four

Friday and Sunday, St. Charles, Missouri played host to the 2017 NCAA Women’s Frozen Four. The weekend was the culmination of a season of play across the midwestern and eastern parts of the United States. The first semifinal game was between the Wisconsin Badgers and the Boston College Eagles, the second between the Clarkson Golden Knights and Minnesota Golden Gophers. The final was a match between Wisconsin and Clarkson, with 2 seed Clarkson upsetting the top team to win the title, 3-0.

With friends, I journeyed west to attend the games and arrived in time to catch puck drop on the Clarkson-Minnesota game. I’m a Clarkson alum, and I credit (or blame) the men’s and women’s hockey teams with getting me hooked on the sport. That nostalgia and community pride made a seven hour drive from Columbus seem like an obvious choice.

Friday’s game was high-energy, fast-paced, and one of the finest hockey games I’ve seen in a long time. The Knights and Gophers traded chances and goals throughout the contest, never more than one goal apart. Clarkson scored first and never trailed, but Minnesota always seemed to have the equalizer. In my view, the biggest difference was in high-end talent. While Minnesota seemed to have better depth (and could set up in the Clarkson end for long stretches), the Gophers didn’t have an answer to Lauren Gabel, Cayley Mercer, and Genevieve Bannon. The Knights’ top line accounted for two goals, 14 shots, and enough rushes to break up the Minnesota threat.

Sunday’s championship match was the Shea Tiley show. Wisconsin held a marked advantage in shots and time in the offensive zone, but the Clarkson goalie stood strong throughout the game. The Golden Knights had to be opportunistic in their attacks, ultimately striking first on an odd-angle power play shot, and netting the game’s second goal on two-on-one rush (with a third deposited in an empty net).

There’s so much to unpack, so I’ll point you to a few fantastic external summaries to help build a bigger picture: Nicole Haas handled the USCHO recap, Jeff Jones shared his story at the Ice Garden, and there’s a great 2017 Year in Review feature at Title IX Hockey.

Instead of a regular recap, I’d like to share some scattershot Clarkson-slanted thoughts on the weekend in women’s hockey (if you’ll excuse the Elliotte Friedman impression).

1. The Frozen Four was supposed to be the final coronation for Wisconsin senior goalie Ann-Renee Desbiens. Desbiens won the Patty Kazmaier award Saturday evening, the award for the best player in women’s college hockey. Her performance was otherworldly all season, with a .963 SV% in 35 games. That includes a mind-boggling 17 shutouts, to add on from the 21 shoutouts the season before.

The missing final win never happened for Desbiens and Wisconsin. But I trust us to be capable of sophisticated thought: losing one game does not change the magnitude of a near-flawless career.

2. Shea Tiley came into the Frozen Four weekend much like the goalies from Boston College and Minnesota: in the shadow of Ann-Renee Desbiens. Tiley left St. Charles with her own spotlight after playing the single greatest game of her career, managing to outduel the Patty Kaz winner.

In Sunday’s game, Tiley faced an onslaught and came away on top every time. In total, the Clarkson goalie turned aside 41 shots. The National Championship game brought Tiley the second highest single-game workload in her career (she previously faced 43 shots at St. Lawrence in February 2015).

Throughout the ECAC and NCAA playoffs, Tiley played 7 games (RPI twice, Princeton, Cornell twice, Minnesota, and Wisconsin). She faced 174 shots and surrendered only 7 goals, a .960 SV% with three shutouts. The final shutout was the biggest.

For Clarkson, it’s a blessing and a curse. The positive: a dominant run, and a title. The issue: Mercer and Bannon are both seniors, and the 2017-18 Knights will need new scoring options in an attempt at defending the championship. Although, given the positive side, that’s hardly a bad outcome.

4. In the 2014 Championship run, Clarkson was led by the ultra-dominant play of Patty Kazmaier winner Jamie Lee Rattray. Perhaps because of the Patty Kaz shadow, I hadn’t realized: Cayley Mercer should probably be in the same discussion for Greatest All-Time in Clarkson history.

Mercer’s first goal against Wisconsin (the second Clarkson tally) was one to remember, and the moment when I could breathe normally again.

5. While the Wisconsin attack was relentless in the championship game, the Clarkson defense was effective in limiting most dangerous rush opportunities. That’s not to say giving up 41 shots per game is recommended (it’s not, and Tiley’s performance saved the day). Rather, Wisconsin’s speed and slot chances were neutralized by strong zone entry defense. Most times the Badgers entered the offensive zone, they were immediately forced to dump in, use the boards, or patrol the point.

The most effective play in this strategy came from the Knights’ top defensive pair: junior Savannah Harmon, and freshman Ella Shelton. The defenders were quick to attack the Badger puck carrier, which forced the less-offensive choices. The outcome wasn’t always perfect once Wisconsin reestablished puck control, but taking away the most immediate speed advantage helped Clarkson set the game’s tempo.

6. Friday’s loss against Clarkson ended Minnesota’s five-year run of appearances in the NCAA Championship game (2012-2016). The Golden Gophers picked up 4 national titles in those 5 years, and now find themselves in a transition period. Without Räty, Kessel, Brandt, and Leveille, Minnesota had to rely on new faces to become their stars.

Of course, Minnesota’s version of a “transition period” is still something to be envied: the team still made the Frozen Four, and the two leading 2016-17 Gopher scorers return next year (Kelly Pannek and Sarah Potomak).

7. At some point in the second or third period, I noticed this kid and her (or his) little sign at the glass across the width of the ice from me. I hope you’ll pardon the fuzzy image, as camera zoom could only do so much. The child and their sign are perfection (although my own bias may have something to do with that conclusion).

8. The final moments of a championship game are traditional among hockey teams: winning team jumps off the bench to rush the ice, gloves and sticks go flying, and a jubilant pile of humanity forms, roughly atop the team’s goalie. I know it’s supposed to be a special moment, but maybe cynicism clouded my judgement ahead of time. I didn’t think I’d love the end of the game so much.

And then it happened. To be able to witness that kind of thing happen for the team you like? To see it in person? I could feel the joy radiating off the ice, I could sense the emotion, this complex mixture of bursting satisfaction, relief, and accomplishment. It was an astounding moment.

9. Clarkson have cemented themselves as a women’s hockey power. The Golden Knights have qualified for the NCAA Tournament in five consecutive seasons. Only Minnesota and Boston College have matched that total over the past five years.

Clarkson has been in the Frozen Four 3 of the past four seasons. This puts Clarkson on par with Boston College, and falls short of only Minnesota and Wisconsin (four straight Frozen Four years for those programs).

And Clarkson is still the only non-WCHA team to win an NCAA title in women’s hockey.

10. Family Arena in St. Charles, MO was a passable host facility for the Frozen Four. Working in the arena’s favor: easy parking, a good size, and comfortable seating.

Unfortunately, the arena is undercut by poor location. St. Charles’ own Lindenwood University played host to the event, but the next nearest DI women’s team is Wisconsin (requiring a five hour trek from Madison to Missouri). Lindenwood is one of the newest women’s DI teams, and makes nearby St. Louis an option during a weekend getaway. However, “nearby” means a 20-30 minute drive from Family Arena to Downtown St. Louis, and walking-distance attractions around the venue are nonexistent. It’s an inconvenient journey for most fans.

The most significant on-site downside: a lack of cell phone service within the arena. (Although I suppose this forces an even more intense focus on the in-game action).

11. The Clarkson Pep band bused from Potsdam, NY to St. Charles, MO for the Frozen Four. That’s a 16 hour drive. They are insane.

It is 12:22am and we have officially left Clarkson on our way to the Frozen Four!! See you later, Missouri! We have quite the ride ahead of us… #worthit #letsgotech

12. The I-70 corridor in Indiana and Illinois is flat. In places, the flatness is all-encompassing. While this fact may not be stunning to midwestern eyes, my Upstate New York roots are accustomed to rolling hills and worn-down mountains, dips and dives. I recommend coffee.

14. Women’s college hockey is an excellent product right now, and I think it’s a perfect gateway for new fans of the sport. Purely my opinion: the speed, skill, and physicality all build a fantastic balance. In both Clarkson games, end-to-end rushes were quick, passes were crisp, and the body checking was kept within sensible levels (enough physical challenge and rigor, without egregious bone-crushers).

The best news: the high level play is happening throughout DI. Ohio State quietly had an All American goalie, and a brilliant rookie defender in the WCHA. St. Lawrence emerged from a few (relatively) down years to tear up the ECAC. CHA champion Robert Morris had two 20-goal scorers. There are great stories across the country, and the Frozen Four featured some of the best play of the year.

15. At the end of the game, after the Wisconsin team had left the ice, as the Clarkson players were skating the NCAA Trophy around the rink, just prior to the team photographs, senior defenseman Corie Jacobson skated away from the team. She reached the glass to my left, and met eyes with a middle-aged man in a bright yellow Clarkson cap. The man had made his way down to rinkside just for this opportunity. He put his hand on the seat-side of the glass, and Jacobson lifted her arm to do the same from the ice-side.

Terry Jacobson and his daughter held their pose for several seconds.

Corie Jacobson is a senior and has been with the team since their prior championship season. But for Jacobson, the 2013-14 campaign didn’t end quite perfectly: injury kept her out of the last 21 games, including the 2014 Frozen Four (reported as a concussion by the North Bay Nugget).

This season, Corie Jacobson played in all 41 games. Sunday’s Championship was a second chance, and a final chance. And Terry Jacobson’s daughter won.