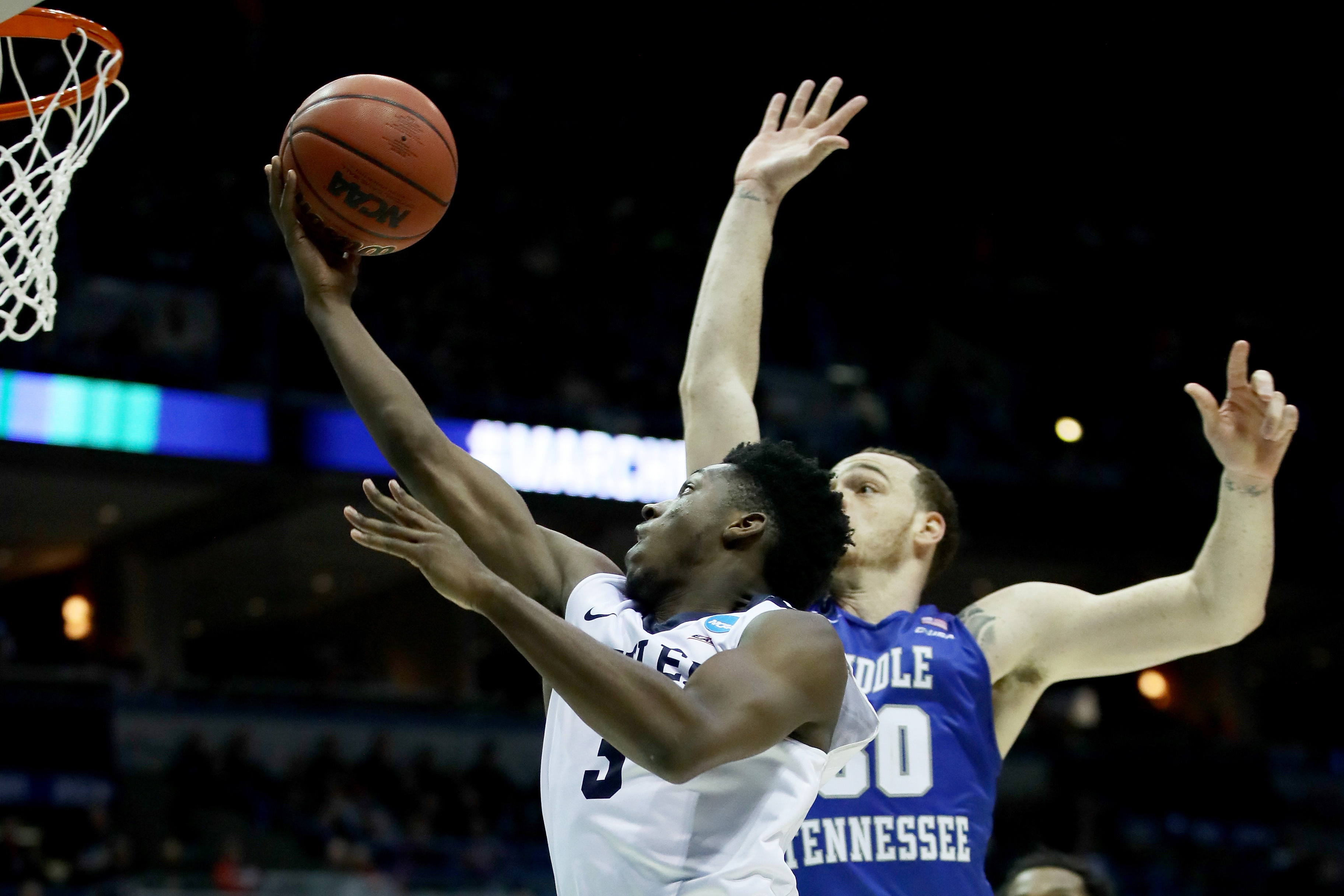 By this time of the year, most diehards are familiar with the big names in college basketball. But who are some of the (more) under-the-radar X-Factors heading into the Sweet Sixteen?

After coming up with a clutch defensive steal to help Wisconsin seal the deal versus Villanova, Brown should be expected to play plenty of minutes against Florida in the Sweet Sixteen. Brown is one of four seniors on the roster, and this foursome has reached the second weekend of the NCAA tournament all four years. Vitto had been struggling to score lately – hitting double digits on Saturday for the first time since Feb. 12 – and his numbers are down across the board compared to his junior campaign. Nevertheless, Brown sank three key treys against the Wildcats, and some more outside shooting will be warmly welcomed by the Badgers’ beastly big man duo of Nigel Hayes and Ethan Happ.

The 6-8 senior forward posted the first double-double of his career during Florida’s blowout win over Virginia on Saturday. Justin has only surpassed 30 minutes twice this season, but his size, shooting, and versatility make him one of the more important players on the team. Role players like Leon will need to play well for the Gators to advance.

Wainright always seems to be smiling and enjoying himself. At 6-5, 241 lbs. with a 7-1.5 wingspan and 8-8.5 standing reach, Ishmail is a fun-loving bully of the basketball court who can do a little bit of everything. His stats for the season (5.7 points, 5.1 boards, 3.1 dimes, 1.7 steals) and in the Round of 32 matchup versus USC – seven points (2-5 FG, 1-2 3Pt, 2-2 FT), six rebounds, five assists, and one steal in a team-high 30 minutes – speak to his well-rounded game. However, his shooting percentages had fallen off prior to the NCAA tournament beginning. After playing sparingly as a freshman and sophomore, Ishmail nailed 40.6 percent (0.8 makes per game) of his three-point attempts in 2015-16, only to fall back to 29.5 percent (0.8 makes per game) as a senior. If Wainright can continue playing efficiently on offense like he has since the tourney tipped off, the grinding do-it-all wing could put himself in a good position to snag a spot on an NBA summer league squad.

Listed as a 6-5, 214 lb. shooting guard with a 6-9 wingspan, Thornwell fills in capably on defense inside and out, often manning interior layers of the zone and boxing out bigger bodies, but also denying opponents the ball along the perimeter with his excellent length. On offense, he is perhaps even more versatile – outside shooting, driving the lane, dishing – you name it, he does it. Sindarius mauled Marquette (29 points, 11 rebounds, three steals) in the tournament opener, then scorched the Duke Blue Devils in the Round of 32 to the tune of 24 points (6-14 FG, 3-6 3Pt, 9-12 FT), six boards, five dimes, and one swipe in 36 minutes. A stellar senior season should see him climbing up mock draft boards, especially if he can help the Gamecocks advance against giant Johnathan Motley and the Baylor Bears.

Projected as the No. 11 by Draft Express, it’s hard to imagine a freshman backup center soaring any higher in mock drafts. However, his stock will probably only continue to rise if Gonzaga makes a deeper run in the NCAA tournament, especially since he’s averaging 12.0 points, 5.5 rebounds, and 3.5 blocks in just 21 minutes per game through the first two rounds.

Listed at 6-2, 200 lbs., Carter’s name is not coming up in most NBA Draft conversations. However, he is a fierce defender with a vastly improved offensive repertoire. After connecting on just 31.0 percent from three-point land through his first two years as West Virginia, Carter is among the most improved players in the nation here in 2016-17, with per-game averages of 13.3 points (44.3 FG, 38.6 3Pt, 76.5 FT), 4.9 rebounds, 3.8 assists, 2.5 steals, and 1.9 treys in 31.8 minutes a night. It’s his defense that is most impressive and notable, though. In the Round of 32 he hounded the heck out of Notre Dame’s Matt Ferrell, a poor man’s Jose Calderon in his own right, and Jevon will give even the best ball-handlers a fit with his full-court feistiness. He’s beginning to remind me of a former second round steal named Patrick Beverley (No. 42 overall in 2009).

Trevon Bluiett has been tearing it up this year and rising as a result. His 29-point outburst helped Xavier stomp out Florida State in the Round of 32, and he is undoubtedly the team’s best player. Nevertheless, Macura, a sharpshooting, sound decision-making wing who wears long sleeves on his arms and legs, is their X-Factor. Bluiett won’t be able to beat Arizona by himself, and the 6-5 junior, J.P., will need to shine bright in order for this Cinderella to survive another day.

Arizona has no shortage of future NBA players, but Ristić is an interesting prospect who’s tougher to pin down. At 7-0, 255 lbs., he would’ve been a lock to make the league a decade or two ago. Nowadays, being massive isn’t quite enough. Still, Ristić is a very smart big man, and he is doing well in terms of manning the paint in this his first year as a starter. The Serbian center is likely to return for his senior season, but he’s worth keeping an eye on. He is so huge that you can’t miss him regardless.

Lucas has double-doubled in three straight games, and the 23-year-old senior will be needed more than ever in this matchup with Purdue. Standing 6-10, 240 lbs. with a 7-0 wingspan, he is one of the few players capable of physically competing against the Boilermakers’ centers (Isaac Haas and Caleb Swanigan). With Kansas committing to small-ball, Lucas will have a lot on his plate.

Swanigan has been receiving plenty of much-deserved consideration for the Wooden Award here in 2016-17. However, his performance against the Jayhawks will shed some light onto how impactful a player he can become at the next level. Caleb is certainly too slow to play the 4 in the NBA, but he’s long, strong, and skilled, especially on offense. Defense is the only real concern, and scouts will be paying close attention to how he fares when he’s forced to switch onto the speedy Kansas guards. If Swanigan can’t keep up with them in the pick-and-roll and make quick recoveries when needed, he’ll be looked at as more of a future backup in the NBA than a starter heading into the 2017 Draft.

Listed at 6-11, 235 lbs., Bigby-Williams is a big boy. Oregon has been going smaller since Chris Boucher suffered a torn ACL. But they might need Kavell to come in and play well against Michigan’s Moritz Wagner. Bigby-Williams moves very well, especially considering his size, and he is an intimidating individual to say the least.

The trio of Wagner, D.J. Wilson, and Derrick Walton, Jr. have all seen their stocks rise as they’ve turned their season around, and this team could be the darling of the big dance. Wagner has a chance to steal the show versus Oregon in the Sweet Sixteen, as he might prove a difficult matchup for the Ducks minus Chris Boucher. The giant German is the complete package on offense, but it remains to be seen whether the 6-11 center can adequately protect the rim. Oregon will test him early and often.

Meeks will need to own the interior against Butler in order for the Tar Heels to advance – and for the senior big man to remain relevant in mock drafts. Given his disadvantages on defense at the center position, Meeks will need to play well to convince scouts that his unique skill set is worth taking a chance on in the NBA Draft.

The 6-0 freshman is an athletic and sneaky lefty who could cause UNC a lot of problems. He is already one of the better Bulldog shooters, and Kamar will likely spend time covering several different Tar Heels over the course of the game. Draft Express doesn’t have wingspan measurements on him, but he has very active hands on defense, always looking to put his limbs in the passing lanes. On offense he is a spark plug of sorts who throws up a bad brick on occasion, but he is shooting nearly 50 percent from the field and almost 40 percent from beyond the arc, plus he’s extremely quick and deceptive with the ball in his hands.

Everyone is understandably excited about the matchup between Lonzo Ball and De’Aaron Fox. However, an equally intriguing duel will take place between Holiday and Kentucky’s Isaiah Briscoe. Briscoe has received much more attention when it comes to mock drafts and whatnot, but I believe Aaron has a much better chance of achieving sustained success at the next level. He doesn’t really have any holes in his game, and his length (6-6 wingspan) makes him bigger than he looks. In their lone meeting with Kentucky this season, Ball couldn’t contain Fox, but Holiday was up to the task. It will be interesting to see how well Ball handles the defensive matchup and how often Holiday ends up covering Fox. Aaron will probably rise in mocks by next year assuming he sticks around for his junior campaign, but only time will tell.

Briscoe will need to play well, as he is one of the few players capable of creating offense off the dribble for Kentucky. If he is outplayed by Holiday, Isaiah could see himself fall farther in the projections after entering college as a stud recruit. Can he make a few outside shots? He does a lot of the little things really well and defends at a high level, but is that enough to thrive in the NBA?

Are there any extension candidates on the 2017 Pittsburgh Pirates?

In the early months of the last two seasons, the Pittsburgh Pirates decided to extend one of their everyday players. Are there any candidates on...