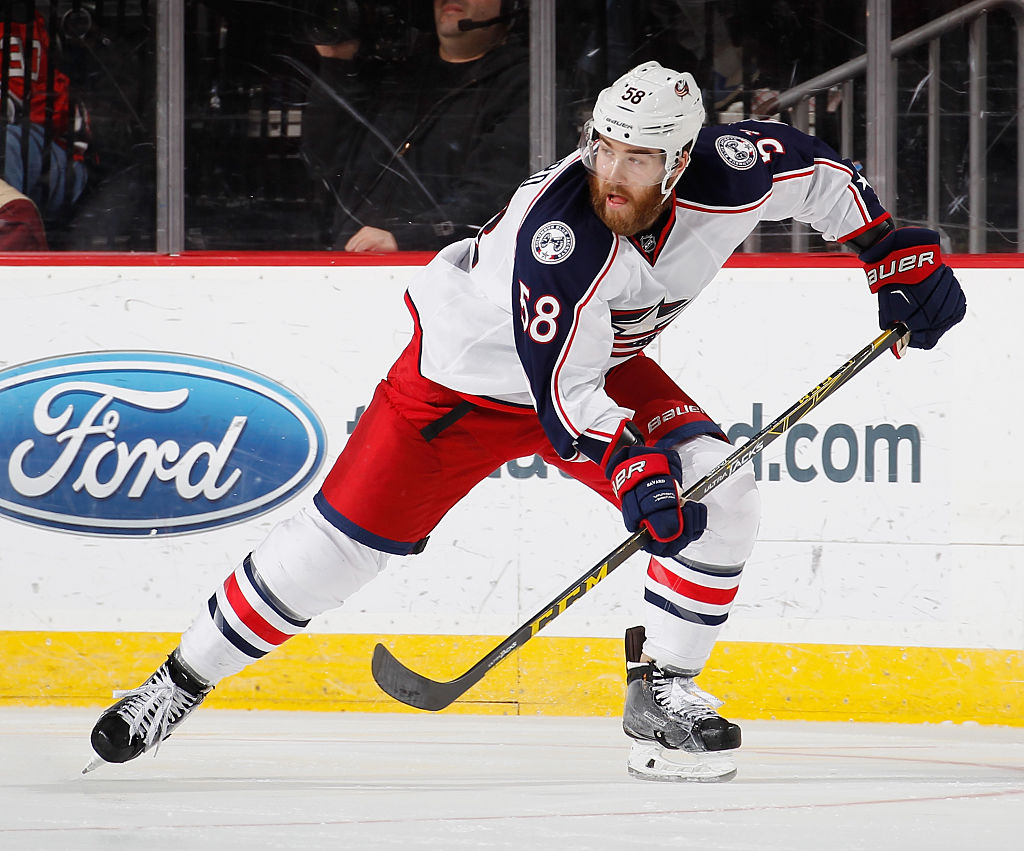 This has been a season of change for the Columbus Blue Jackets. The bird’s eye view lets us see an incredible year-over-year transformation: 76 total points last season, 101 this season with 9 games remaining. It’s fair to credit Sergei Bobrovsky and his sterling save percentage for a lot of the turnaround. However, diagnostic statistics also reveal improvements in front of the netminder. Last season, the Blue Jackets averaged 52.42 shot attempts per 60 minutes, and that has jumped to 56.05 this year (5v5, via Natural Stat Trick 2015-16 and 2016-17). Columbus also displays a slight defensive boost, as shot attempts against have dropped from 56.53 per 60 minutes, to 56.04. On a player-by-player look, few have shown as much drastic improvement as Blue Jackets defenseman David Savard.

As a preface, it’s worth noting that I’ve explored some of this unexpected territory earlier in the season. First, I looked at the giant jump in shot-based metrics early in the season, and how the “why” behind the Blue Jackets’ improvement was hard to explain. Then, I dug a bit further and considered how John Tortorella’s team and Jack Johnson specifically were performing outside past expectations.

Today, we’re going to take a look at David Savard in the past, and David Savard this season. Savard’s history of poor shot performance is not as well-established as Johnson’s. However, Johnson and Savard are closely linked, as the two have been frequent defensive partners in their time with the Jackets.

Savard and the Old Shot Battle

The key jumping-off point: prior to this season, David Savard had not been great in his time with the Jackets. The particular reasoning behind his problems is hard to diagnose.

A positive aside first: David Savard has been a reasonably effective point-producer. Savard has one prior 11 goal season (2014-15), and managed 0.35 points per game in his time from 2013-14 through 2015-16. In a scoring sense, Savard has been in fairly good NHL company, one of only 65 d-men to manage that per game pace (via Hockey Reference).

The problem comes in shot metrics. Over that time, Savard was consistently below break-even in shot differential, and frequently a negative influence on his teammates. Consider this WOWY plot created with data from Hockey Analysis (at Savard’s player page, from 2013-2016). On the x-axis are CBJ teammates with at least 200 5v5 minutes played alongside Savard, sorted from most time on ice with Savard (on the left) to least (on the right). The y-axis is CF% at 5v5. Blue bars represent player CF% when with Savard, red bars are player CF% when playing apart from Savard.

The main takeaway: most CBJ players met a better shot fate when apart from Savard between 2013 and 2016. It’s a sobering result attached to a player with a $4.25 M cap hit through the 2020-21 season (via Cap Friendly). (And I’ll note: contract critiques are directed toward the team, not the player.)

The caveat: Savard played nearly half his 5v5 minutes with Jack Johnson. That means it’s hard to assign blame here. Was Savard truly at fault? How does Johnson factor into the story? Savard only played 200+ minutes with two other d-men (Nikita Nikitin and Ryan Murray), making non-Johnson trends that much harder to spot.

But this is the season of change, so let’s do some year-over-year comparisons to see if David Savard has also been swept up in the positive vibes.

If we narrow our focus to explore only Savard’s play (and, by common partner association, Jack Johnson’s play), we can explore a different angle comparing past (and current) play. Using data from the Corsica custom query for skaters, I’ve made plot of David Savard’s 25-game average Corsi For per 60 minutes on ice, and Corsi Against per 60 minutes on ice. Everything is 5v5, and covers the 2013-14 season through the 2015-16 season. The green line is CF/60 and higher is better. The red line is CA/60 and lower is better.

The past shot performance from is consistent with the WOWY information we saw above: Savard was generally on ice for more shots against the CBJ than shots for the CBJ over this time span.

Savard does exhibit a few interesting features here: at the end of all three seasons, he had a general jump in shot generation (the green line going up). In the 2014-15 season (the middle of the trio), Savard was caught up in the CBJ late year run. In the 2015-16 season (the rightmost of the trio presented) the addition of Seth Jones may have changed the outcome.

Unfortunately, there’s still a lot of “why” left to answer, and the particulars of why Savard made marked late-season improvements are likely worth more investigation. (Did the CBJ implement a different playstyle toward the end of each season? Was Savard’s early-season conditioning a problem? How do injuries factor into his performance? These are unanswered questions for another day.)

Data from Corsica, through and including the Toronto game from 3/22/17

Here, everything has changed. Suddenly the CBJ are winning the shot-attempt battle when Savard’s on the ice. It’s a huge change from the general trends of the past three years.

To give fuller context, I’m going to put the entire 2013-2017 dataset on the same graph below:

Data from Corsica, through and including the Toronto game on 3/22/17

It’s in the 2013-17 version that we gain a full appreciation for the magnitude of the flip. 2016-17 Savard is not simply in the positive. This year’s on-ice results are wildly better than anything Savard has seen before. Shot generation (the green line) has stayed high all year, and the low points of shot generation (red line) were astounding.

It’s worth noting that the on-ice product has slipped a bit in recent days (CBJ shot suppression isn’t quite as impressive). This might be cause for worry, a return to previous norms. Yet even with the recent drop in performance, Savard continues to be above 50% CF% on the season.

The Puzzle That Won’t Crack

Now the bad analysis news: I still don’t have a good “why” to share.

Let’s start by paying a visit to the brilliant Hockey Viz. On David Savard’s player page, we can try to pick apart the d-man’s average responsibility by considering the TOI of his opposition. I’ve included the images below, from the 2015-16 (on the left), and (on the right) 2016-17 seasons.

We’re looking at the right side of each graph, which corresponds to percent of ice time versus a particular type of opponent. For example: Bar “1” for forwards represents the opposing forward with the highest time on ice (think: Crosby for Pittsburgh, Kopitar for Los Angeles). The same idea applies to the defensemen (Bar 1 for a Burns or Karlsson).

The size of bar represents the amount of time David Savard faced that type player. A larger bar vs a “1” forward compared to all others implies a tough role facing hard competition. If bars in the 4-8 range were larger than “1,” then the player is afforded some shelter from the toughest opposition.

In the David Savard case, it’s very hard to contrast 2015-16 from 2016-17. The responsibility is almost identical (facing mostly 1st and 2nd forwards, mostly 1st and 2nd d-men). That means we can’t credit a change in defensive role for the boost in CF/60 and CA/60.

At Hockey-Reference, we see that David Savard has slightly less time on ice per game this year (21:43) compared to the last two (23:10 and 22:57). Is that enough to explain the improved play?

The answers just won’t come, and that’s part of what makes the 2016-17 season so fascinating and confounding. I suspect there’s more to pick apart in Savard’s passing performance (although I can’t say for certain). That makes the tracking work by the likes of Corey Sznajder (at The Energy Line) and Ryan Stimson even more important going forward. There’s likely an answer in the specifics of play, something that’s not recorded in NHL Game Sheets.

For now, though, the diagnostics point to an improved Savard. The lingering questions: can the play continue into the future, and what changes have allowed for this kind of transition?

Background images on plots from Wikimedia Commons, and from Getty Images via Bloguin/The Sports Daily license.