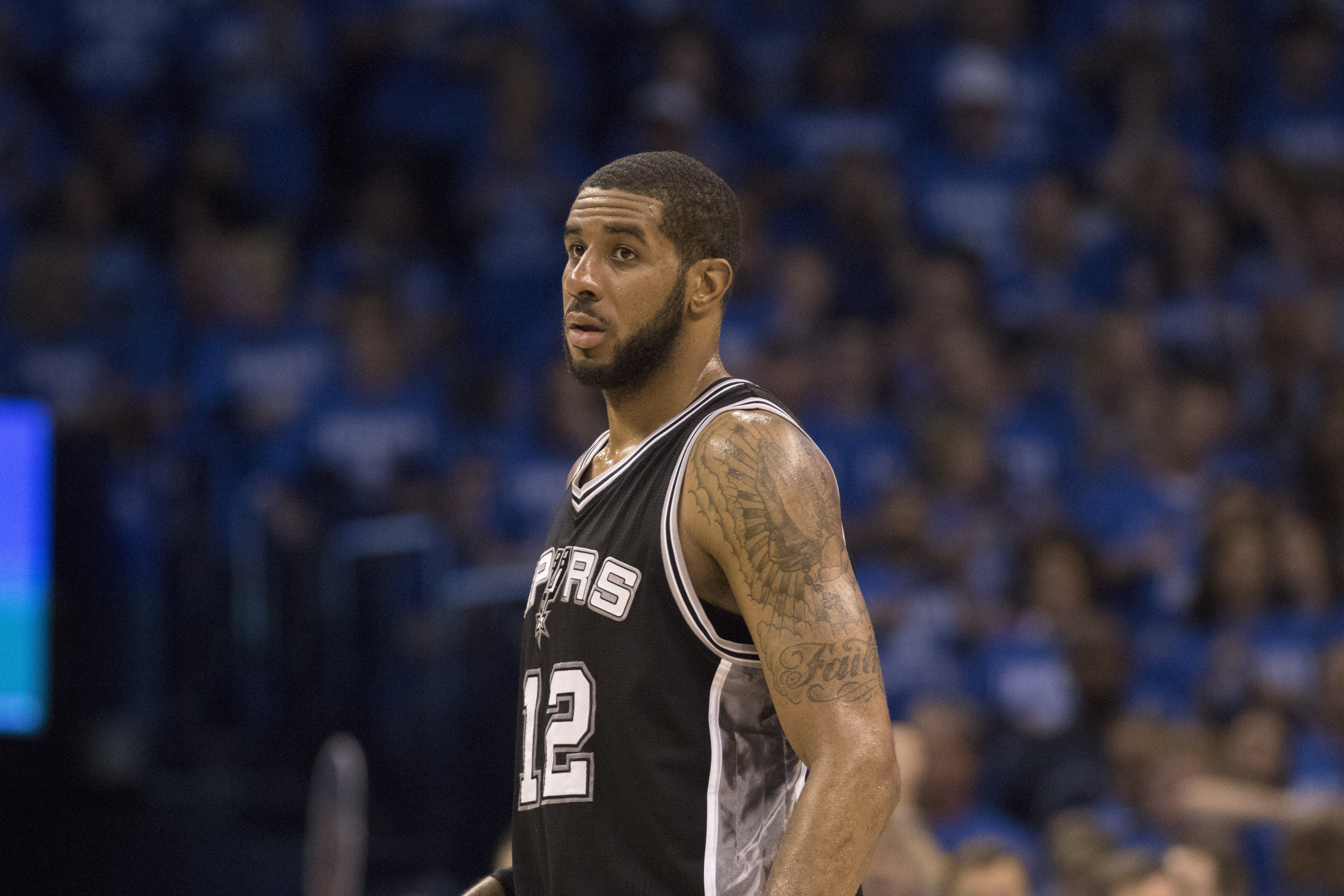 After blowing a 22 point lead against the best team in the league, the San Antonio Spurs looked categorically awful in the first half in Oklahoma City. They didn’t connect on the few offensive looks they created, and they found themselves down 54-41 at halftime. Despite their early struggles, the Spurs clawed back in the game with the help of their bench and wound up winning 100-95.

San Antonio fell behind early against OKC because their top two scoring options did not play well out of the gate, but LaMarcus Aldridge and Kawhi Leonard came through when it mattered most. With the game on the line, LaMarcus protected the rim against the triple-double averaging Russell Westbrook and Kawhi made an incredibly difficult layup through contact to ice the game for San Antonio.

The Spurs looked out of sync on both ends to start the game, as they allowed easy layups and couldn’t create open shots. San Antonio had a tough time putting the ball through the hoop to start the game in OKC, as Kawhi and LaMarcus shot just 5/18 from the floor in the first 24 minutes.

The Spurs’ bench is one of the best in the league, but it’s incredibly difficult for them to have any success as a team if their best players aren’t executing well. Spurs Head Coach Gregg Popovich decided to play Leonard with most of the second unit in the second half, and that helped turn the game around.

This Mills/Manu/Kawhi/Aldridge/Pau lineup has trimmed the Thunder 21-point lead down to 10.

San Antonio trailed by 21 midway through the third quarter, but Manu Ginobili hit a three and Pau Gasol and Leonard went on a 17-2 run to cut it to a 71-68 deficit. The second unit of Patty Mills, Manu, Gasol, and David Lee alongside Leonard played solid defense and created scoring opportunities for Leonard and Gasol. Kawhi closed the run by hitting two layups and a three-point jumper.

Aldridge shot just 5/14 for the whole game, but three of those makes came in the fourth quarter. Aldridge also displayed his defensive hustle in the final stanza, blocking Westbrook early in the quarter and once again with the shot clock off and the game on the line. Everyone in the arena knew ‘the Brodie’ would be taking the last shot, and Aldridge was right there to stop him from making the layup.

Leonard figured it out late in the game as well, shooting 50 percent from the floor in the second half and finally getting that three ball to fall a few times. He had missed his last 17 shots from long range, and he only hit 2/9 from beyond the arc in this game, but those two makes made a difference. After Aldridge’s block Leonard recovered the ball, took it coast to coast, and hit a layup despite being fouled to seal the comeback win for San Antonio.

Ginobili had eight points to go with a season-high eight assists, and he was an incredible plus 26 in the game. His game-high +/- reflected how important his performance was to the success of his team down the stretch. He made so many plays that didn’t show up in the stat sheet, but the 39-year-old guard’s career has been built around grabbing the loose ball or making the hockey assist that gets his team the win.

This was one of the biggest comeback wins in recent memory for the Spurs, and it may have provided a glimpse into what their playoff rotation will look like for Popovich’s squad. The starting lineup will probably be Tony Parker, Danny Green, Leonard, Aldridge, and Dewayne Dedmon moving forward. Mills and Gasol will likely play heavy minutes in the playoffs because they both stretch the floor and provide offensive firepower off the bench.

The athletic Dedmon has helped the Spurs excel defensively since becoming the starting center, but opposing defenses have exploited his lack of range by helping off of the big man and doubling Kawhi and others in the paint. Gasol has shot 60 percent from three since the All-Star break, and he’s an astonishing 90 percent from the corners. He adds an outside shooting ability that pulls opposing centers out of the paint, and his defense has been pretty solid to boot.

Mills also stretches the floor better than the guy starting ahead of him. Parker isn’t the greatest 3-point shooter, but Mills might be the best shooter on this Spurs roster. Additionally, Parker has had a tough time defensively against the elite point guards in the league. Patty stands just six feet tall, but he makes up for his lack of height on the defensive end by pestering the ball handler.

I don't think anyone other than Manu Ginobili can make this passhttps://t.co/VhAfZjtCXj

Lee has been fantastic off the bench for the Spurs, as his well-rounded offensive skill set seems to help all of the players around him. Even though he isn’t a threat from the perimeter, his ability to score from anywhere within 15 feet and pass like a guard has been a huge plus for the second unit. He has bought in defensively as well, and does a pretty good job of guarding reserve bigs.

Ginobili has been on the floor down the stretch for the Spurs in many close games this year. Sure he’s 39, but Manu is proving over and over again that age is just a number. Even though Green is more accurate from distance and better defensively, Popovich seems to trust the Spurs’ elder statesman more when the game is on the line. When the game is tight, Ginobili seems to elevate not only his play, but the play of everyone around him.

I don't think anyone other than Manu Ginobili can make this passhttps://t.co/VhAfZjtCXj

In the past several games, Kyle Anderson has played the backup small forward role that was previously occupied by Jonathon Simmons. The two seem to play the game the completely opposite way, but Anderson has made a positive impact in his time on the floor of late. It is unclear who will be the main backup to Kawhi moving forward, but whoever it is will likely find themselves at the end of the playoff rotation.

The only reason Kyle Anderson got this shot off was because he slowed down to 1/4 speed at the end and floatedhttps://t.co/Hxpk3qrJHF

The burden on Leonard and Aldridge will increase when the playoffs start, and they won’t be able to shoot poorly and expect to win. Coach Pop will shorten his rotation, and the young guys like Davis Bertans and Bryn Forbes will probably only see the floor when games are already decided.

Mills and Gasol will need to continue to shoot effectively off the bench, and Lee and Ginobili will be expected to contribute at a high level on both ends of the floor. ‘Slow-Mo’ and ‘the Juice’ will duke it out for the tenth spot in the rotation, and that’ll probably be who plays for San Antonio this postseason.

The Oilers clinched a playoff spot for the first time in 11 years this week, which made this week’s roundtable question really easy. Which team...