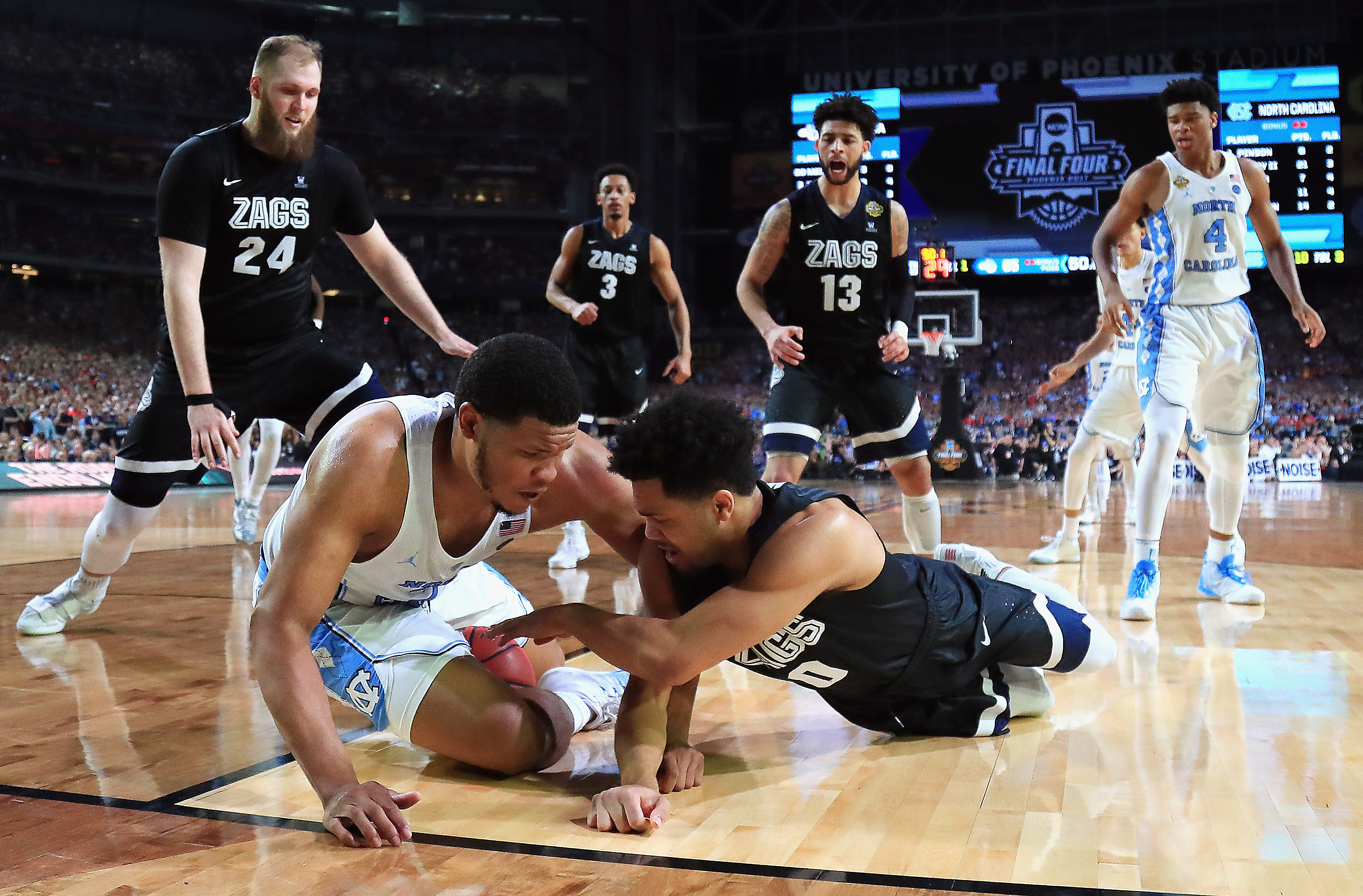 March Madness is over. Congratulations to UNC for winning a dramatic final game filled with bricks, fouls, missed free throws, and shoddy officiating. Time to evaluate how the tournament games affected the draft stocks of the prospects on my big board. I’ll highlight some of the players that have already declared, some that are destined to declare, and those that had deep runs in March.

Justin Jackson UNC SF – Big Board #26: Jackson moved up 21 spots from my last Big Board due in large part for being the leading scorer on a national title winning team. Admittedly lower on Jackson’s ceiling than many others, I’m still not willing to consider him a lottery prospect. His activity on and off the ball on offense and his length give him a fairly solid floor to contribute off the bench early in his career, making him an ideal mid-to-late first round pick. Against stronger and longer defenders, expect Jackson to struggle to create offense for himself and others, much like he struggled with offensive efficiency against the long front line of Gonzaga. A fierce competitor and winner, Jackson projects as an energetic role player rather than a star at the next level.

Joel Berry UNC PG – Big Board #50: I had Berry outside of my top 100 in early March. Bumped him up to a second round pick if he decides to declare for the draft. Hate being a prisoner of the moment and simply rewarding a kid for being named most outstanding player of the tournament by raising expectations to unreachable heights, but Berry should be able to run an offense in summer league much like Tyus Jones did going into his second season in the league. Berry is older, shorter, and less athletic than Jones, and Joel will be a major defensive liability – but bench units in the NBA need a steady hand. Joel proved in this tournament that he is calm under pressure, possesses translatable range, and has the composure to dictate the flow of the game.

Kennedy Meeks UNC PF – Big Board #60: Moved into potential second round territory, but nobody was guarding him outside of 10 feet. If he can’t develop a face-up game, his physical traits won’t intimidate any bigs in the league. He can bully Jordan Bell, but he can’t move any quality NBA big in the paint.

The rest of UNC: Tony Bradley didn’t show much in the tournament, but he is young, athletic, and seemingly growing into his body, so his value holds steady as a possible early second rounder. Isaiah Hicks finished his senior year on top and will hope it translates with a selection on draft night, but expect him to be one of the last 10 off the board (or undrafted).

Zach Collins Gonzaga PF/C – Big Board #12: Gonzaga may have lost, but Zach Collins is my biggest winner of the NCAA tournament. Expect all NBA teams to keep tabs on his decision to enter the draft, much like they did with Robert Williams until he declared his return for his sophomore season. If Collins enters the draft, I expect teams in the lottery to work him out and study his film – as he checks all the boxes for a modern big man: length, agility, athleticism, defensive instincts, hands, and a jump shot. The biggest question with him will be whether he can continue to improve his defensive discipline. After a superb showing in the Final Four game against South Carolina, Collins was (unfortunately) unable to avoid foul trouble against UNC’s deep front court and the NCAA officiating crew that called any contact immediately. Seeing him handle the final five minutes of action could have helped his stock, but the ceiling is high enough to scare any team in the 10-15 range from passing up on him – lest it come back to haunt them several years down the road.

Nigel Williams-Goss Gonzaga PG – Big Board #76: Williams-Goss did everything the Zags needed him to do throughout the tournament and for the first 39 minutes of the championship game. Then he tweaked his ankle and tried to play hero-ball on consecutive possessions, only to get rejected. An unfortunate turn of events for lanky playmaker that certainly improved his stock. Teams will have to consider him as a potential fit for second units and let him prove himself as a floor general in summer league.

Sindarius Thornwell South Carolina SG – Big Board #46: Thornwell led South Carolina all season long, and he was the driving force behind the Gamecocks’ Final Four appearance. As a senior, he exhibited all the traits one would expect from a team leader, from composure and confidence, to leading the team in scoring. His physical attributes translate. The question will be whether this is his peak, or if he can contribute to an NBA offense without any elite skills. Is he this year’s Malcolm Brogdon?

Jordan Bell Oregon PF – Big Board #48: The Ducks would not have been in the Final Four without Bell’s heroic performances to get them there, but he also may have prevented them from having a shot at the national title by not being able to box out the Tar Heels not once, but twice, on free throws in the waning moments of the game. Those plays were symbolic of his potential limitations in the NBA, where his size and strength will not grade out, and his grit will have to carry him a long way. A despondent Bell will take some time off before deciding whether to come back for his senior year, but if he rides this tournament performance, expect a team to give him a shot in the second round. Teammate Dillon Brooks holds steady at #35. His showing in the tournament solidified his stock as a jack of all trades yet master of none.

Tier 1: Markelle Fultz holds steady as the most complete prospect in the draft, with Lonzo Ball moving into the second spot on the big board. His lack of aggressiveness in the Kentucky loss was dispiriting, but his passing brilliance is undeniable. Ball’s shooting mechanics will scare some teams away, as well as his inability to get shots off in the mid-range. These concerns are real and need to be reviewed and potentially addressed once he enters the league, but passing on him with a top-3 pick might look silly. Josh Jackson fills out this tier of the top-3 prospects, as his postseason play with Kansas only solidified most scouts’ stance on him as an elite athlete with very little bust factor who may be limited to a role as a well-rounded third option. Jackson’s defense will be good to great and he has the passing ability to make him a triple threat if he develops a decent jump shot.

Tier 2: Jayson Tatum, Dennis Smith, Malik Monk, and De’Aaron Fox. Nothing separates this fearsome foursome besides need and fit. Tatum is a gifted and versatile offensive weapon with length and size any team could use on the wing. Monk is a pure scorer and a fantastic shooter. His athleticism makes him an obvious pick for a team lacking shooting at the 2. The next couple months will give him a chance to showcase his handles in workouts, as his opportunities were limited by Coach Calipari giving Fox the keys to the Wildcat offense. Speaking of Fox, that performance against UCLA had many drooling about him being the best of this bunch. But, he still can’t shoot. Smith didn’t get to play, so expect to hear more about him in the coming weeks when teams start watching his game tape. He makes plays that make your draw drop, and that is what NBA stars do.

Tier 3: The first seven players on my big board all seem to be sure bets. If they don’t become NBA stars, I’m convinced at the very least they can be contributing starters to title-contending teams. This tier on the other hand has much more variance. It’s still possible the best prospect in this draft turns out to be named Frank Ntilikina, Lauri Markkanen, Jonathan Isaac, Zach Collins, or Miles Bridges. Thats what makes the late lottery this year just as intriguing as the top 10. Someone is going to get a prospect here that could develop into a franchise player. Ntilikina looked like a stud at the U-18 championships, but we need a larger sample size of shooting. As an athlete, he doesn’t explode out of the gym, but his measurables are nearly perfect and he always seems under control. Markkanen didn’t get to finish his Freshman season the way he probably would have liked, but his sweet shooting was still historic for a 7-footer. No pun intended. Isaac’s per-36 stats are mouth watering, but Florida State really underperformed, and he never really found a rhythm. Collins has had a meteoric rise (as previously mentioned) and has the widest range of potential career outcomes. Last but not least, Miles Bridges did not disappoint in his matchup with Josh Jackson. His defense needs a lot of work, but he clearly showed the ability to use his athleticism to his advantage on offense. Holding his own against a top-3 prospect in this draft gives me confidence that he can contribute in a similar fashion against NBA athletes.

I try not to kill kids for having one bad game, but Justin Patton didn’t impress, and slides down the board five spots – unfortunately becoming the only notable “loser” of the big board prospects during the tournament. Now watch him blow everyone away in workouts and receive a top-10 draft promise.