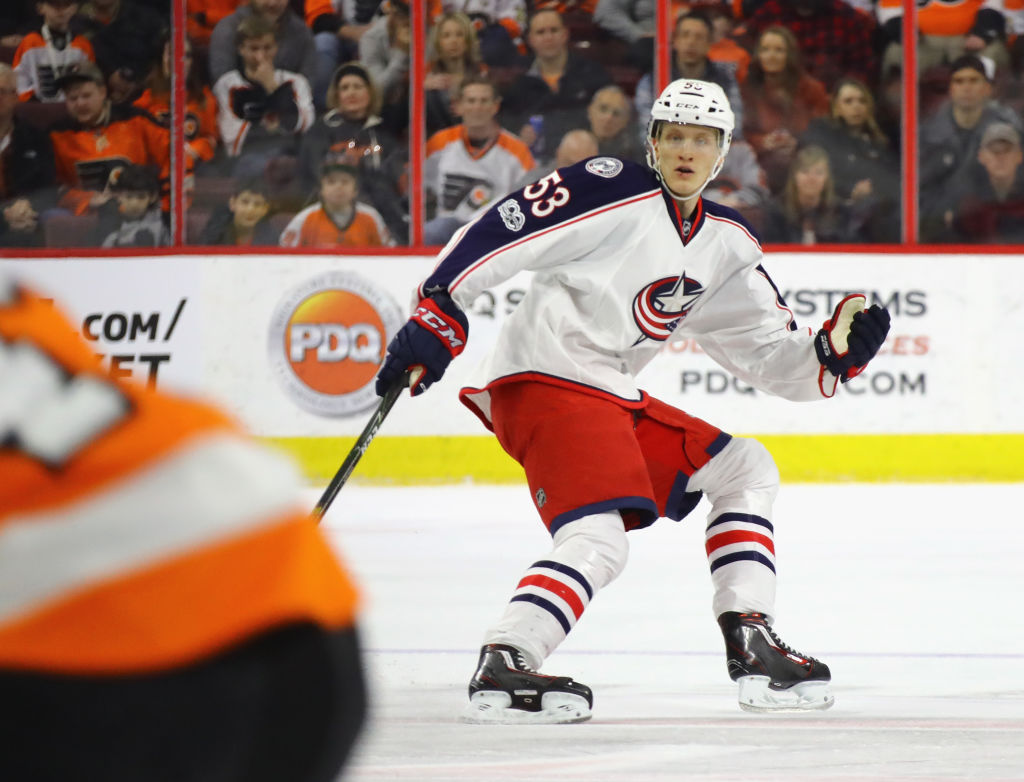 Allow me to make a hockey generalization: we, as a hockey-viewing public, don’t much care about the NHL regular season. We can have a discussion about degree of not-caring, but based on fan reaction (and media hype, and team statements), the playoffs are all that matter. It’s Stanley Cup or bust! Which means that this afternoon’s game was the least meaningful of them all. The Columbus Blue Jackets are already locked into their playoff spot against their playoff opponent! The Philadelphia Flyers are already locked out of the 2017 playoffs, and hurt their draft lottery chances every time they win a game! In the Nihilist Showdown, Columbus were “losers,” falling 4-2 in Philadelphia.

Why bother, right? If this game has no meaning, what’s the point of even playing?

Here are some meaningless superlatives to wrap up the second-to-last game of the year.

The Record Down the Stretch: Not Necessarily a Big Deal

The Blue Jackets’ win column hasn’t been updated in more than a week. Accordingly, John Tortorella has expressed his opinions on the matter during media availability. In the April 5th Columbus Dispatch, the Jackets’ coach described the team’s late-season motives in a way that doesn’t put all the emphasis on the regular season outcomes. He explained, “We just have to keep playing through it and try to find ourselves that way.”

It’s not a new sentiment, it’s not a reaction to the length of the skid. On April 1st, Aaron Portzline shared some of Tortorella’s words in another feature in the Columbus Dispatch. Torts said, “We want to win these games, of course. But it’s more important to me that we’re playing the right way when the real games get here.”

Anecdotally, history doesn’t take too much issue with Torts’ assessment. Over at The Hockey News, Sean McIndoe (better known as Down Goes Brown) explored cases of regular season slumps that turned into playoff glory. All five examples are salary cap teams, and some build a tale of extreme contrast. The 2013 Boston Bruins are a particularly interesting case for Columbus fans: those Bs finished the season with just two wins in their final nine games.

So about that “playing the right way” thing…

The Last Few Games: Not Really That Bad

I understand: losing is not fun. Even if we’re not supposed to put much weight on the regular season, victories are a preferred outcome from a novelty entertainment perspective.

There is, however, good news hiding in the late-season results (if you’re willing to overlook the poor goal showing). Using data from Natural Stat Trick, we can look at the shot attempt battle over the past five games.

Apply all the caveats you’d like (PIT didn’t have Malkin & Letang, CBJ have been playing from behind in most games). The shot results show a Blue Jackets team that is neither giving up on games, nor getting outplayed in this recent losing streak. Three of these successful games have been against possible Cup contenders, and all three ended in favor of the CBJ.

If Tortorella’s above priorities are valid, perhaps the recent results shouldn’t be the focus. Yes, there are areas to fix (the powerplay, for one). Also true: the CBJ have shot volume in their favor right now. The bounces will come, so long as reasonable fundamental play continues.

CBJ netminder Sergei Bobrovsky has made a very real case for his second Vezina Trophy over the course of this season. The past three games haven’t been his best.

In April, Bob has a reasonably-bad .864 SV%. You can apply context to the silly bounces (including at least 2 of the 4 scored on Bob in Pittsburgh), but Bobrovsky isn’t in his finest form right now.

Big picture? Bobrovsky is a goalie, and is not immune to the highs and lows of his position. Remember late January and early February? Over the course of four games from 1/24 to 2/4, Bob finished 0-3-1 with an .864 SV% (via Hockey Reference). You may recall that the goalie turned things around in March. This isn’t to imply that Bobrovsky is on the precipice of another insane run. Rather, it’s to point out that slumps happen.

Grab Bag: Other Items in Philadelphia

The Blue Jackets did not appear to suffer any injuries in this afternoon’s game. That’s the most important outcome.

The CBJ scored their first powerplay goal since March 13. It’s a pleasant sign of life for a unit that has been impotent in recent days. Over at The Athletic, Tyler Dellow considered some of the adjustment issues that have plagued the Jackets (note: it’s behind a paywall).

Gabriel Carlsson made his NHL in today’s game. The Swedish defender was a 2015 first round pick for the Jackets, and made the jump from Cleveland after only 3 games as a North American pro player. Carlsson is one to watch for the years to come – check out the CBJ Prospects’ State of the Prospect Pool article from late March, and keep your eyes on CBJ Prospects for more news and updates on Carlsson in the future. That future will continue to be with the Jackets for at least one more day – Tortorella confirmed on the Fox Sports Ohio postgame that Carlsson will play tomorrow in Toronto (s/t to Alison for asking a “great question”).

Still no Zach Werenski in the lineup today (out with injury sustained during an Ovechkin hit March 23rd), but there is good news to come from Philly. Aaron Portzline reported updates from the CBJ during pre-game availability. Tortorella’s expectations for a Werenski playoff return? “Totally confident. Totally,” the coach told the Dispatch. GM Jarmo Kekalainen was more reserved with the Dispatch, but echoed the positivity.

A returning Werenski would be a huge boost for the CBJ during the playoffs – which is, after all, the thing that matters.

The Tweet of the Game is a bit self-indulgent today, but let’s hammer this home.

The final game of the CBJ 2016-17 Regular Season is tomorrow – the Jackets are in Toronto.