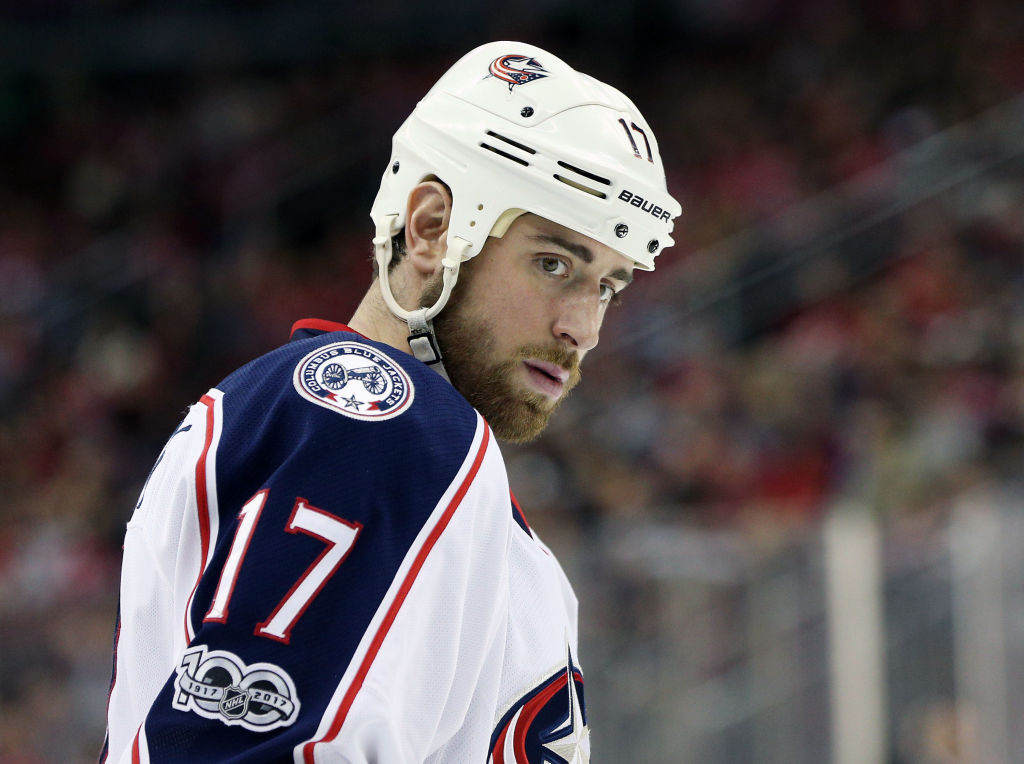 One of the highlighted matchups in most Columbus-Pittsburgh playoff previews: Brandon Dubinsky versus Sidney Crosby. It’s now a notorious battle thanks to Dubinsky’s less-than-legal efforts to injure the Penguins’ captain. You may recall this play to the back of the neck, and the resulting suspension. Crosby has tired of the nonsense in the past, even dropping the gloves against his Columbus nemesis.

The undercurrent to all this questionable physical play: the idea that somehow Brandon Dubinsky’s actions are negatively impacting Sidney Crosby’s on-ice performance. But is that true?

It’s a question we can start to answer at 5v5 play using data from Hockey Analysis. At Sidney Crosby’s player page, we can consider the Penguin captain’s play. In particular, we can key in on the four years he’s faced Dubinsky in Columbus (Crosby’s WOWY 2013-17). At the same time, we can examine Brandon Dubinsky’s performance (WOWY 2013-17).

Let’s consider each player separate from the other through on-ice goal and shot metrics; then we’ll move to the head-to-head battle. A few limitations: the data here is only from regular season games, and Crosby-Dubinsky has only been a matchup for 73 minutes on ice (versus the 4660 vs everybody else for Crosby, and the 3617 for Dubinsky). It’s hard to draw long-term outlook conclusions from such a limited slide. However, we should be able to determine if Dubinsky has really been an effective option against the best player in the NHL.

It’s a mixed bag for both parties. Summarized: The impact of the goal battle has been a victory for the Penguins, the shot battle has been a win for the Blue Jackets. In the details, we can see that things go wild when Dubinsky faces Crosby.

Let’s tackle goals first. When 87 and 17 are on the ice, Pittsburgh scores more frequently and Columbus lets up more goals (PIT GF/60). However, the goals for Columbus completely skyrocket (CBJ GF/60), a big downgrade for the Penguins relative to normal play, and a massive jump for the Jackets. The net impact still puts Crosby ahead, but it’s not quite as gaudy a total as typical NHL competition allows (PIT GF PCT).

On the shots side, the picture is crazy again but gives an edge to the Blue Jackets. When Crosby faces Dubinsky, the Penguins shoot less frequently than normal PIT play (PIT CF/60). However, that “dip” is still a big increase in shots weathered by the Blue Jackets (and 61.88 CF/60 would still rank among the top 23 for individual forwards in the NHL). It’s on the other side of the ledger that the CBJ come out ahead: CBJ CF/60 is more than 10 points higher compared to normal on-ice totals with Dubinsky. Accordingly, the Penguins take a massive hit, allowing far more shots against. The net battle becomes a Columbus victory (CBJ CF PCT over 50%).

The biggest takeaway? The comical number inflation. Crosby vs Dubinsky results in a big uptick in goals for both sides, and a marked change in shots against the Penguins. That means the “shutdown” narrative around Dubinsky just doesn’t hold up when facing Crosby.

Instead, what emerges is a story of wild offense. This is a battle that Dubinsky has lost more often (GF% over 50% for Crosby and Pittsburgh), but the battle challenges the Penguins to match fire with fire. A good game by either goalie could transform the big shot volume into a lopsided line victory, and maybe a key to the series.