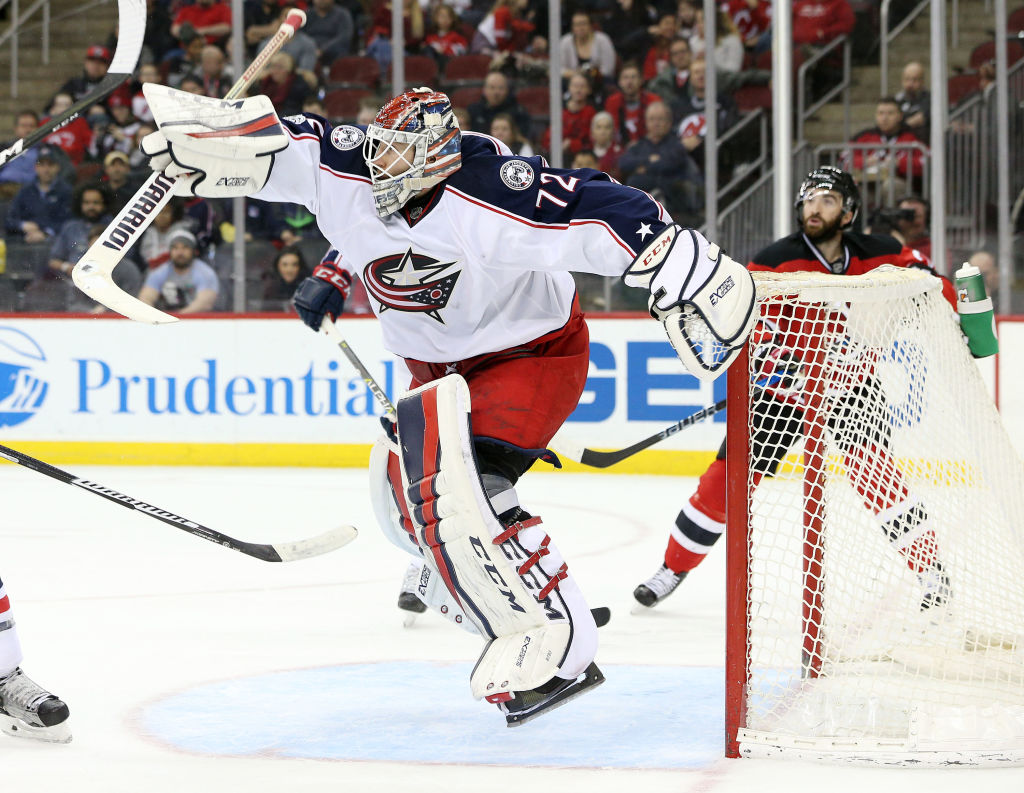 Goalies are playoff trouble. A hot goalie can steal a series from a clearly superior opponent (see: Halak vs the 2010 Capitals, Rask vs the 2013 Penguins). One bad night from a normally-decent goalie can mean the difference between new life, and a tee time at Muirfield. A goalie can mask incredible defensive woes, and a goalie can unravel even the most complete of shot volume efforts. To paraphrase Jeff Marek, you need a save… but how sure are the Blue Jackets and Penguins of their choices in the playoff net?

Both teams are intimately familiar with the importance of netminder in the past season. For the Pittsburgh Penguins, a rookie goalie helped propel the team to a Stanley Cup last spring. For the Columbus Blue Jackets, a goalie’s return to form has helped the team reach new heights after one of the darkest years in franchise history.

Starter picks are obvious on both sides: Matt Murray in Black and Gold, Sergei Bobrovsky in Union Blue. How does the matchup look? Let’s compare the two in the 2016-17 season.

Matt Murray started the season late due to a broken hand suffered during the World Cup. Since his season debut in November, Murray completely took control of the Pittsburgh crease, handily outplaying veteran goalie Marc-Andre Fleury and removing any doubts that the injury might hamper progress throughout the year.

It’s also worth remembering that Murray still qualifies as a rookie this year (having only appeared in 13 regular season games during the 2015-16 season). While the Calder discussion has (rightfully) centered on Auston Matthews, Murray’s excellent SV% has brought the Penguins back toward the top of the Eastern Conference. Murray has been excellent for Pittsburgh.

Three hours west on I-70, Sergei Bobrovsky has put in a Vezina-worthy performance. Bob leads the NHL in overall save percentage, and sits just behind Craig Anderson in even strength save percentage (although the CBJ goalie has about 1,000 more minutes on ice). Bobrovsky was brilliant throughout the year, so it’s fun to pick the highest high points. Three straight shutouts? Stunning. A sterling March? That’s a good choice, too. Going 12-0-0 in December is probably my favorite part.

Bob’s incredible performance comes as a big shift from a so-so 2014-15 season, and a lackluster 2015-16 campaign. In both years, injuries plagued the goalie (groin issues in January 2015, persistent issues last year). Now, Bob is a favorite to earn a second Vezina, and has been the focus of praises from Canadien goalie deity Carey Price.

The 2016-17 numbers favor Bobrovsky over Murray in this matchup. Career even strength save percentage tips toward Murray, but the Pittsburgh goalie has only faced a fifth the shots seen by Bob. That means there’s less to work with, so our confidence is lower (based on the work of Eric Tulsky). Smaller-sample career playoff save percentages show Murray in a brighter light than his Russian competition.

My takeaway: if Bobrovsky is at his best, the Blue Jackets likely hold the goalie advantage. But therein lies the problem – it’s impossible to give game-to-game goalie predictions, so a pre-series edge may be meaningless when the puck drops on Wednesday.