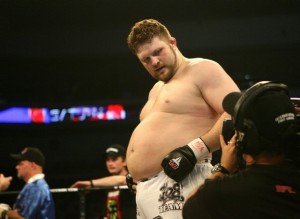 – carries way too much fat
– undersized (height, reach) for a heavyweight
– old for a fighter
– gets into slugfests
– has taken a lot of damage over his career – chin is starting to not be as reliable
– very inaccurate striker
– poor striking defense
– takes way more hits than he delivers (more than double)
– horrendous takedown accuracy
– despite being a BJJ black belt, doesn’t take many fights to the ground
– doesn’t fight smart – basically only looks to land his big right hand
– definitely on the downside of career – only 3-7 over his last 10

You can’t question Big Country’s toughness, but you can question whether or not he’ll be able to achieve elite-level success as a UFC (or Bellator) heavyweight fighting the style he fights and with the frame he has.