Trust the Phillies' Process Too 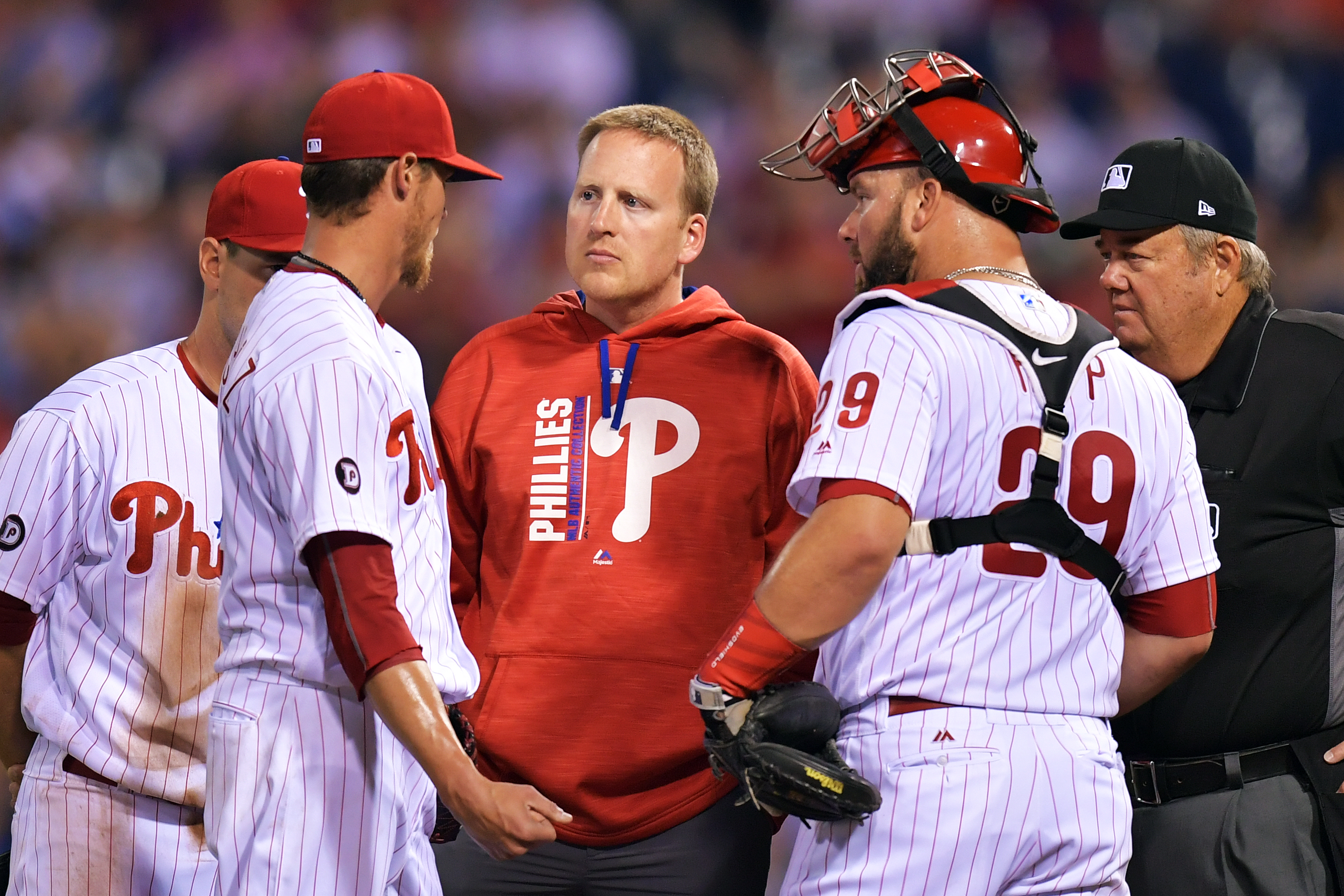 Trust the Phillies' Process Too

Last time we saw our Phillies, they officially cast off the last vestiges of the great 2008 World Series core. Now, they find themselves 100-percent into building the next would-be championship contender.

Now, one week into the 2017 MLB season, let’s take stock of the great Philadelphia baseball franchise rebuild or, as we refer to these things in Philadelphia fan circles, The Process.

Currently, the 2017 Phillies are a very young ball club with some veterans sprinkled in for the seasoning. They boast a starting rotation that is teeming with potential, but still spewing out disappointment in the (sometimes) occasional spurts. That’s how young pitching goes.

Still, the ceiling is pretty high for the guys hanging out in the big league rotation. They have their closer issues currently, but that is a problem for the short term, not exactly high on the Phillies long term priorities.

At the plate, the Phils have the potential/disappointment mashup working as well as the veteran seasoning mixed in. It is a solid way to progress into the cultivation of prospects stage of the rebuild because — let’s face it– the best hope for the future of the franchise is still playing minor league ball.

Overall, this Phillies team is judged not as a playoff contender, but as a team that should lose between 80 and 90 games and (hopefully) make a push for .500 ball. Exciting!! (I kid.)

Look, we know there is not going to be a parade down Broad Street featuring this exact cast of characters, but that does not mean we can’t enjoy the ride back to prominence, nor should we stop Trusting the Process just because basketball season is over.

Lost in the great Trust the Process roller coaster mania that was 76er basketball in 2016-2017, the town’s baseball team walks a similar road, only one that takes considerably longer to trek. Baseball is itself a 162-game marathon season, but its professionals must journey through their own marathon which consists of five organizational levels before they even make it to the summit.

With such a long slog before even your best prospects hit the bright lights of The Show, a great organizational rebuild, that starts from the ground up, takes about a half decade if you’re even lucky enough to see it through.

Now, patience is not exactly one of the character virtues of your average Philadelphia sports fan. As much as our Sixers fan sub-group is known for its patience, you have much of the old fan guard (think WIP and shortest term thinking columnists at the daily papers) losing their collective hot-take-spouting minds over it constantly.

Still, we all know deep down that The Process is working for the Sixers. Their future ceiling is in the stratosphere, even if the near past was scorched basketball earth. The down years should (hopefully) be all worth it as the Sixers might be fielding three or four potential franchise players with an equal number players poised to fill out the supporting cast. The future is (almost) now for Process Trusters and Process Haters alike. All because of the process.

So back to the team at hand, the Philadelphia Fightin’ Phillies, and their process. Their process started in earnest towards the end of the 2014 season when the first batch of the remaining World Series-winning homegrown core was shipped out of town. Gradually, all the veterans (even very young veterans) that could contribute to a contending franchise were shipped off for a slew of touted prospects.

General managers and front office higher-ups were phrased out and replaced by more progressive baseball minds who were groomed in organizations outside of the Delaware Valley (thus bringing new ideas to the table). Today, the great franchise rebuild is now several years into the process.

The problem with this rebuild process is that .. it … issssss … lllloooonnnnnnngggggggggggggg. Baseball is a game for more patient people than other sports. Failure is every batter’s companion about seven out of every 10 times up to the plate (if they’re good). It’s hard to trust a process that you might not be as able to see the end of, you know?

Maybe it’s me. I have been fortunate enough to have lived and breathed Southern California air for the past almost decade. Maybe I’ve gone soft. Maybe the gift of perspective has blinded me from the continued, prolonged, seemingly-never-ending plight that is rooting for Philly sports teams.

No, despite the fact that I do need to wear a hoodie when the highs fail to reach 70, I’m still just as passionate and desperate for another title or a (gasp) string of titles from one franchise. I just now know that the only way we’re going to get there is by building stronger, more talent-rich organizations from top to bottom.

These are not easy processes. There’s a reason why each of the Philly franchises have been in their own winters for much of the 2010s — they were very poorly run. Sometimes, the only way out is to hit the reset button.

The Phillies ignored the analytical side of building a franchise. Whether or not you agree with that as a primary focus, you cannot argue that statistical data is not at least another useful tool in the scouting toolbox.

There was also an old-timey sort of vibe to their organization, which isn’t a bad thing on its own unless you’re refusing to get along with the times. That is no longer the case for the Phillies, who have clearly moved into the present with analytical thinking and an emerging presence in Latin America. They have successfully hit that reset button so that their future is very bright.

When the Sixers initiated their reboot, an entire high school graduating class just witnessed ghastly basketball. Their first semester in college might be the Sixers’ coming out party in the NBA.

For Phillies fans, an entire middle school to high school experience might be witness to losing baseball. It’s not that they’re doing worse than the Sixers, they just have to wait longer for younger talent to permeate through the system and onto the major league club.

Trust the process, Phillies fans. You’ve already been doing it for (seemingly/metaphorically) 76 years already. What’s (at least) another 162 days?