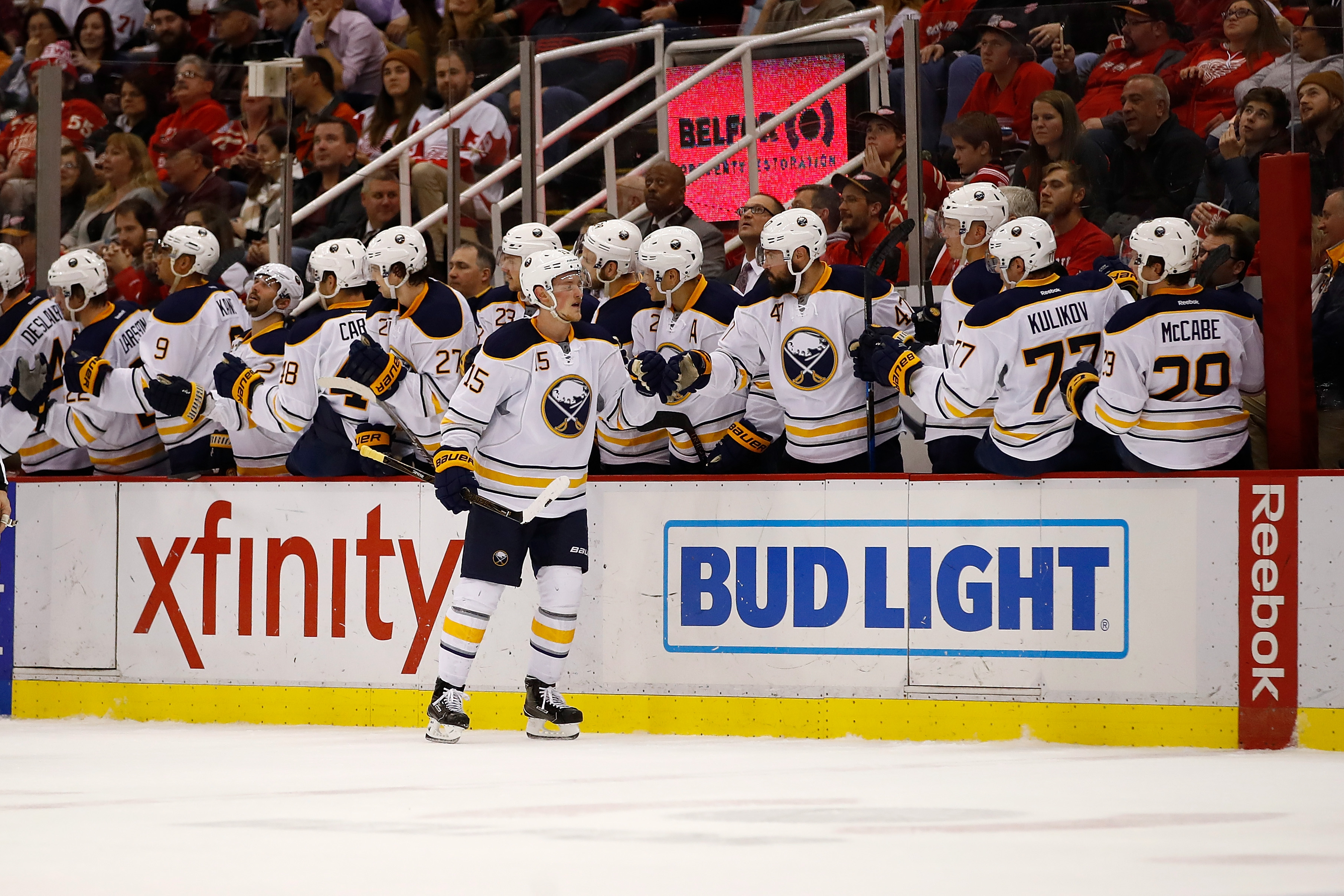 The Sabres struggled through a season that everyone – the fans, the press, management, and the players – seemed to despise by its end. The highlights were few and often far between, as the team struggled with consistency and, um, basic hockey skills like ‘passing’ and ‘defending,’ and everyone breathed a sigh of relief when it all ended. With that said, let’s give out some awards for the season from hell!

If Tim Murray has a hot seat – let’s call it low heat, as if you were simmering something – then Dan Bylsma is on fire, the kind of heat you need to get your pan smoking hot. Murray ought to shoulder some of the blame for this season due to his poor roster construction, but it’s Bylsma who’s gotten the Blame Eye of Sauron on him. His system doesn’t work with the roster, he sits on leads too often, he shuffles his lines way too often and in odd combinations – lord help us if Eichel has to play more minutes with Marcus Foligno flubbing perfect set up passes – and even managed to reportedly lose command of the locker room, especially after his humiliating benching of Sam Reinhart.

Murray’s year-end press conference definitely supported the notion that there was a disconnect between the players, the system, and the coaches. So Bylsma’s got his work cut out for him this summer, and a short, short leash coming into next season.

Nearly every conversation about the future of the Sabres defense has involved some mention of Guhle, who is poised to take on a full time NHL role next year. Whether he’s successful immediately remains to be seen: despite a solid Sabres cameo this past season, it’s pretty difficult for young defensemen to adjust and succeed in the NHL, especially at age 21. Same goes for Antipin, the KHL defenseman who will reportedly sign with Buffalo after his season ends. The 24 year old has 5 years of experience in the KHL against grown men, which will help in his transition to the NHL, but you can never know for sure if the adjustment period will be quick or take more than a season.

Both of these players should help the defensive depth in the coming years, but more moves need to be made than just welcoming those two into the fold for the Sabres to have a playoff caliber blue line.

With apologies to the steady hand of Ryan O’Reilly, Eichel was Buffalo’s best player this season, putting up nearly a point per game in his abbreviated 57 game season. This was the kind of season you wanted to see, as he upped his game and produced like a franchise player. And, with apologies once again to Ryan O’Reilly, it seems clear that he’s destined to the team’s next captain. Not only is he their best player, but he’s also become more of a leader on the ice and, seemingly, in the locker room. (That’s anecdotal, based off what we see from press conferences and the like, but it certainly seems like he’s becoming a more vocal leader.) We’ll see what happens next season, but I expect Eichel will be wearing the C next season.

Hate to Admit it But Award: Rasmus Ristolainen Needs to Improve

Every time Ristolainen scored a slick goal or finished with a couple of assists, Sabres twitter got on their high horses, furiously @-ing any of the stats people who claimed that Ristolainen wasn’t good because of his various fancy stats. Here’s the thing, though… the stats people aren’t totally wrong. They’re wrong when they say that he isn’t good at all, or isn’t the Sabres best defenseman; Cody Franson is not, despite some good numbers, their best blue liner. But Ristolainen still needs to improve his defensive play to truly become a number one defenseman. If anything, him being the Sabres’ best defenseman is an indictment of the team’s roster.

The best in the league do not have a sub 45% Corsi number, let alone sub 50%. Ristolainen is at 43.8, according to puckalytics.com. I know, I know: he plays the toughest minutes, deployed unfavorably, and is often out there with a poor partner like Josh Georges. But to be a top-flight defenseman, you have to be consistently driving play in your team’s direction. Ristolainen is skilled offensively, especially as a power play quarterback, but has a ways to go to become a great NHL defenseman in his positioning and puck retrieval. I think with a capable partner and smart coaching, he can get there. But we don’t have to pretend that he’s unimpeachably #good now.

When it came time for the columnists of the Buffalo News to give their POWER TAKES on the Sabres season, they took glee in getting their digs in at the hosts over at WGR and the fans who had championed the tank two years ago. While rabid tankers do deserve some digs – like, say a radio host who said the coach and GM don’t matter – the fervor with which the Buffalo News sports section went after any shred of optimism was insanely tiring and disheartening. There were glimmers this season, even if the cranks didn’t want to see them: Jack Eichel was awesome this season, even if you didn’t like how the team got him. Ryan O’Reilly continued to be excellent. Sam Reinhart plateaued a little bit, but is still a solid player with excellent hockey sense. Evander Kane was one of the league’s best goal scorers once he returned from injury. But most of the time, you saw BN scribes providing snark about how the tank had failed, about how fans were rubes for believing, and that it will never, never, never get any better.

Lehner finished the season with a .920 save percentage this season, good for 15th in the league among goalies with twenty or more starts, according to NHL.com. That’s not too shabby, especially for a team that gave up as many shots as the Sabres did this season. But man, when Lehner was off, he was off, giving up some of the softest goals you can imagine or completely imploding in a period. It was especially jarring to see him give up a squeaker during an otherwise good game for him – that’s what it takes to beat him? This weird habit, combined with his horrible performance in shootouts, is enough for me to question whether he’s the goalie of the future. As others have suggested, the Sabres may try to keep Lehner on a bridge contract and groom his replacement in the next coming years, whether it’s Linus Ullmark, Cal Petersen, or someone else.

Next Thing to Irrationally Hope For: A Lottery Win, Even if it Wouldn’t Immediately Fix the Main Issue

The Sabres finished fifth from last this season, and will get the 6th best odds in the upcoming lottery. (Las Vegas was given the third best odds automatically, knocking the Sabres down a spot.) The top two prospects this year are Nolan Patrick and Nico Hischier, two solid centers, though not near the caliber we’ve seen from the top of the last couple drafts. If the Sabres were to finally win a lottery and jump anywhere into the top three, they’d be able to snag another skilled forward, giving them enviable forward depth going forward.

Of course, that wouldn’t fix their main problem – the D corps. None of the defensemen in this year’s class look pro ready, so drafting one in the top three would be snagging a player who would likely contribute two or three years down the line. Once again, this doesn’t quite solve the pressing issue on defense for next season, though it wouldn’t be bad to bolster the defensive depth going forward. On the bright side, though, a lottery pick could be traded for a capable D man, or the Sabres could keep the pick, draft a player like Patrick or Hischier, and trade a forward for defensive help. So, fingers crossed that the Sabres finally have some lottery luck, especially after a profoundly unlucky season.