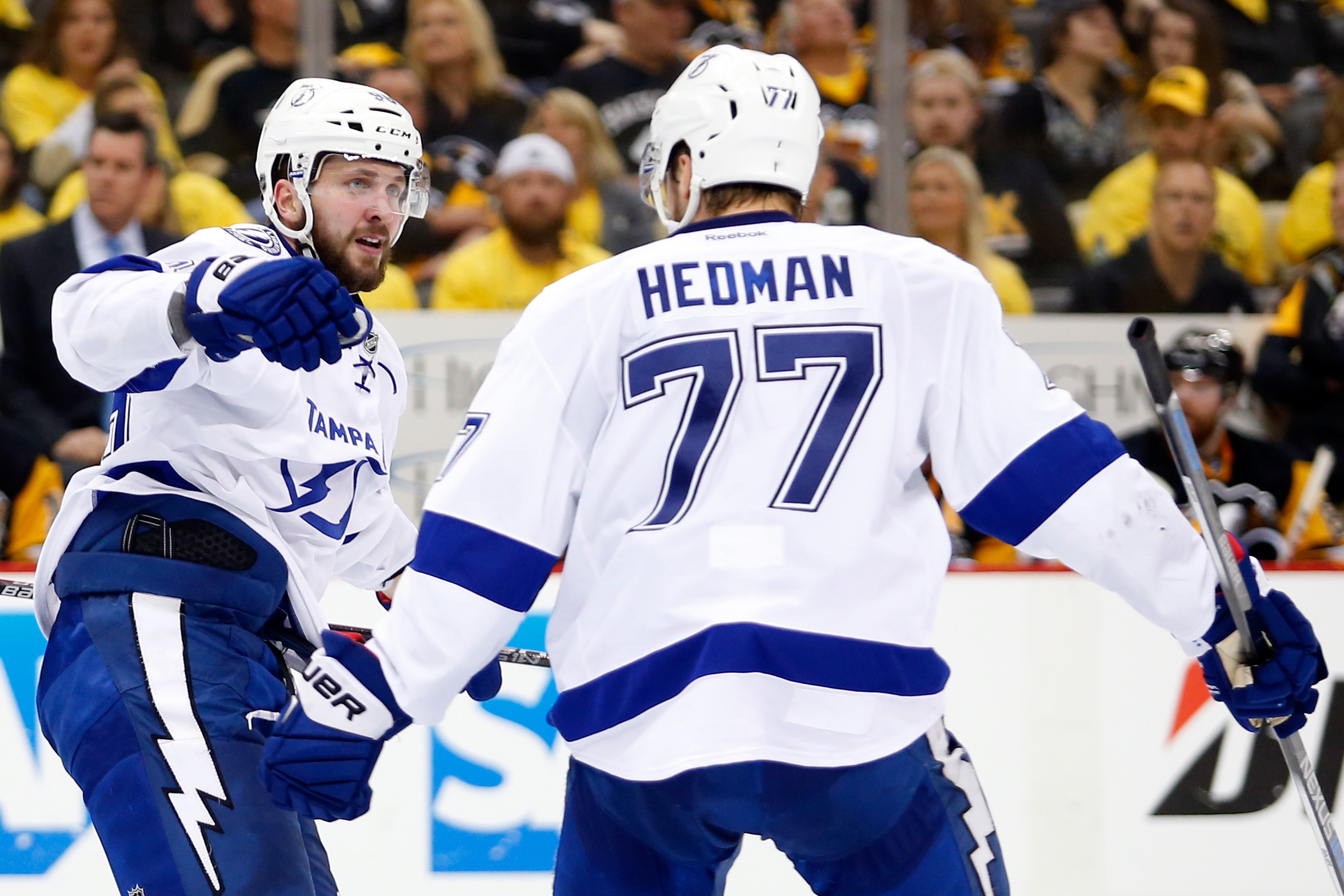 This year’s Stanley Cup Playoffs are officially underway. It’s a special time of year when sixteen teams lay it all on the line for a chance at winning a championship. Given the Tampa Bay Lightning’s recent success it’s more than a little odd to be looking at the postseason from the outside. Despite a valiant late run, the Bolts fell short of a wild card spot and face a long summer filled with uncertainties. It’s a tough pill to swallow for a team that’s enjoyed so much success recently. Not every year is going to be the year. That doesn’t mean the Lightning’s 2016-17 campaign was without merit. A lot of great things happened and they deserve to be recognized.

It’s difficult not to gush about the incredible season that Victor Hedman had. He finished the year with 72 points in 79 games. He averaged 24:30 TOI  in all situations on the ice. He became the first Lightning defenseman to reach the 70 point mark in a season with three assists in the April 6th game against the Toronto Maple Leafs. Victor’s star has been on the rise in recent years but many have attributed his strength to working with a seasoned veteran like Anton Stralman. Hedman spent more time playing on other pairings and took his game to another level.

Number 77 wasn’t just the best blueliner on his team, he finished the year second in scoring among defensemen. He also registered 56 assists, the fourth most in the league among all skaters. There’s no doubt he should be in the conversation for the Norris Trophy.

One of the main challenges the Lightning faced this year was a number of their visible leaders were beset with injuries. Steven Stamkos and Ryan Callahan were sidelined almost the entire season. Brian Boyle and Ben Bishop were traded at the deadline. In their absence Hedman would frequently be seen as the man speaking to the media after games and owning that role. He may have always been a leader in the locker room but this year he truly became a face of the franchise.

Fans and talking heads alike were astonished that Brayden Point made the Tampa Bay Lightning out of training camp. He was the only rookie with AHL eligibility to make the NHL squad since GM Steve Yzerman took the reins of the Bolts. Most expected Point tyo be reassigned to Syracuse when Ryan Callahan came back from injury.

The Calgary native was able to show what he can do in training camp, largely due to the absence of 12 Tampa Bay players attending the World Cup, Ryan Callahan rehabbing and Nikita Kucherov holding out.

He opened eyes with his play during camp and he became a key component in the Lightning offense including the power play.

The 20 year old scored seven points in his first 20 NHL games and never looked back.

“He deserved a spot on the roster,” GM Steve Yzerman said. “He makes us a better team.”

All Point did was score 18 goals, dish out 22 assists, get off 122 shots, score two game winning goals and accumulate 12 power play points in 68 games. All while becoming the Lightning’s number one center.

He’s small (5’10”, 160 lbs.) and just an average skater, but his will and competitiveness make him a solid offensive player that can be gritty.

In three seasons with Moose Jaw, Point registered 236 points (99 goals) in 204 games. There’s no reason to think that he won’t continue to be a scorer and leader now that he is an NHL player.

The Lightning missed the playoffs but Brayden Point seized his opportunity to show that he can play at the NHL level. The future is bright for the Bolts.

There have been a lot of questions around Tampa’s goaltending wunderkind’s readiness to step into the number one position. After all he’s only 22 years old and had spent several years working as Ben Bishop‘s back up. Andrei Vasilevskiy had shown flashes of brilliance but he’s still so young and relatively inexpereinced at the NHL level.  The hypothetical questions became an active experiment when Bishop was traded to the Los Angeles Kings at the March 1st trade deadline.

Vasilevskiy’s response on the final stretch of the season and his emergence as the team’s number one is one of the Bolts’ top stories. His growth is especially remarkable after mid-season struggles when Bishop was injured for a nine game stretch. Andrei finished the season with a 23-17-7 record, 2.61 GAA, and .917 save percentage. What’s the most remarkable about those numbers is the fact that he went 12-4-2 in the games after Bishop’s departure. He upped his game and answered a lot of questions about his readiness to assume the number one spot.

Doubters may knock Vasilevskiy’s experience as a detriment but his youth and resilience will likely be one of his biggest assets. He has a lot to learn but has already grown an incredible amount over the course of one season. His work ethic is lauded among coaches and teammates alike. Vasilevskiy is committed to improving his game. If he’s this good at 22 imagine the levels he’ll reach as time goes by.

Many of the Tampa Bay Lightning’s most productive and important players missed most of the season due to injuries (Steven Stamkos, Ryan Callahan) and others were traded away (Valtteri Filppula, Ben Bishop, Brian Boyle). The Bolts looked more like the AHL’s Syracuse Crunch with all of the call ups, yet they stayed in the playoff race until game 81.

The reason for that was 86, Nikita Kucherov.

The 2011 second round pick has become the Lightning’s best player just when they needed him to be that.

Kucherov’s 38th goal beat the Red Wings in overtime and it gave him 29 points (17 goals) in his last 16 games, which is the most in the league since the start of play on February 21. It was Kucherov’s team leading sixth game winning goal.

Kucherov became an NHL star in 2017. Despite playing with a cast of AHL youngsters, Kucherov finished the season fifth in points (85), behind only Connor McDavid (100), Sidney Crosby (89), Patrick Kane (89) and Nicklas Backstrom (86). He finished tied for second in goals (40) behind only Sidney Crosby (44). The Russian was in the top twenty in assists (45). He scored 17 power play goals which tied him with Brayden Schenn and Alex Ovechkin for the most in the league. Kucherov finished third in the NHL in power play points with 32. His points per game percentage was an astounding 1.15, behind only McDavid (1.22) and Crosby (1.19).

“I think he’s a top player in the world,’’ Sportsnet analyst Nick Kypreos said during an interview with Canadian Sportsnet Radio. “Kucherov is now in that conversation.’’

Kucherov will also be a contender for the Hart Trophy given to the NHL’s most valuable player. “I know he’s our Hart Trophy candidate,’’ said Lightning head coach Jon Cooper. “When we’ve needed him most, which is this last stretch of games, we’ve jumped on his back,’’ Cooper added. “I mean you talk about the most valuable players to their team; for us that’s Kuch.’’

The amazing part of Kucherov’s journey to NHL stardom this season is that the more things that went wrong, the better he got.

Play with a bunch of kids…no problem. Lose your center (Tyler Johnson) for a long period of time…Sure! I’ll just make a 21 year old rookie (Brayden Point) a star.

A year and a half ago it seemed likely that Jonathan Drouin‘s career in Tampa would be over before it really began. The winger asked to be traded and walked away from the Syracuse Crunch to wait for the demand to be fulfilled. Five weeks later he returned to the AHL and later rejoined the Lightning at the end of the regular season. His offense was a welcome addition to a team that was dealing with Steven Stamkos‘ absence as he recovered from blood clots and surgery.

An older Drouin played with poise and maturity over the 2016-17 campaign and had a break out year as a result. Through 73 games played Jonathan scored 21 goals and registered 32 assists. His playmaking skill was key as the Lightning were dealing with prolific injuries over the duration of the season. In Steven Stamkos‘ absence he brought a stabilizing presence to the improved power play unit.

Drouin remians one of the most dynamic players on the ice. He has the ability to take his play to another level. Whether it’s using his superior speed to skate circles around the opposition or his playmaking vision, he shows an incredible amount of promise. One of the season’s bright spots, he’s also one of the off-season’s biggest question marks. Drouin is set to become a RFA this summer and will likely be seeking a longer contract with a high price tag that may be beyond what the Lightning can realistically offer. If he can bring consistency to all aspects of his play there’s no doubt he’ll ascend to the upper echelon of NHL players.

Thanks for reading and stay tuned for Part 2 of the Lightning’s Terrible, Horrible, Good, Very Bad Year.