Recap: Celtics, screaming “SWEEP THIS,” burn down Chicago in Game 3 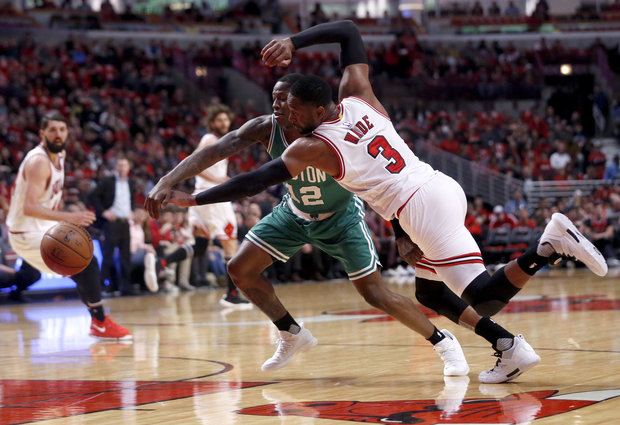 The past few days have been nerve-wracking for fans of the Boston Celtics and candy for sports-media malcontents. WEEI remembering the Celtics exist! Alarmist tweets! Mass hysteria! Gerald Green in the starting lineup! Yes, seriously. But the latter was an undeniably Good Decision, and while Rajon Rondo’s injury hurt the Bulls due to lost playmaking, the Cs also emerged from their sleep, regained the composure and offensive identity that won them games all year, and sealed bloody revenge on the road.

I’m sure Brad Stevens knew damn well he’d have to live with Robin Lopez getting rebound-drunk. The Celtics do not have anyone who’s his size-equal. That became clear in the opening moments–but so did the cold truth that RoLo isn’t gonna hit those midrange jumpers often as not like he did in Games 1 and 2. And the godawfulness of the Celtics’ performances in those contests obscured the flaws in the Bulls’ gameplay (which was undeniably good in most respects). To wit: For all his points, Jimmy Butler hasn’t shot well, and Dwyane Wade, random 3s be damned, is missing wide open steal-and-dunks.

Oh, and, like, the Celtics actually made shots they usually make. That always helps. Avery Bradley, Jae Crowder, Gerald Green and Al Horford all nailed 3s in the first quarter, and had their first commanding lead of the…well, the entire series, at 33-15. Using Green as the starting PF added energy and athleticism that Amir Johnson simply wasn’t (and can’t) offer anymore

If Wade’s left open for long 2s and layups he’ll probably make ’em, as happened in the early minutes of Q2. But aside from Paul Zipser (for whom I’m developing a deep and rich hatred) and Bobby Portis, the Bulls bench didn’t play well as it had earlier in the series–a godsend for the Cs. NOT a godsend: Losing the poise and offensive slickness of Q1 for much of the second quarter’s final half, with contested shots, turnovers and herky-jerky court movement. Boston got enough of their mojo back just before time expired with a 44-41 lead for halftime, but that shouldn’t keep the panic back for me or anyone else because OH JESUS DO YOU ALL REMEMBER HOW BAD GAME 2 GOT?

Many noted in the days between the last game and tonight that the Cs weren’t using Horford and I.T. in the pick-and-roll to produce alley-oops, a seemingly no-brainer combo. This time around, they got some easy buckets off it, including at Q3’s start and midway through the frame, ending in indicative of the many adjustments Stevens made.

Although rebounding remained a problem, Horford and a rotating cast of Celtics swarmed him into undeniably reduced effectiveness. The Bulls’ good ball control of previous contests largely disappeared, their play turning lazy and uninspired. While Crowder and Bradley cooled down somewhat from their fiery starts, the 3-ball was still the Cs primary advantage, and aside from Wade jumpers and Lopez tip-ins, Chicago was borderline toothless on the offensive end. The isolation sets that Boston forced them into by clamping down on their ball movement helped produce this–at the end of Q3, they had less than 10 assists by comparison to Boston’s 20-plus, who by then held a much healthier 76-63 lead.

While “play the right way and good things happen” is one of ball’s oldest cliches, it’s also true in more than a few instances. It certainly was tonight. While I wouldn’t go and say the improved bench performances, adjustments, consistent shooting and effort level are going to save them from the 0-2 hole they fell into, they’re welcome signs. The Bulls are capable of being good-ish on D in the half court, but are lost when the pace increases and teams go out in transition. Which is exactly what the Celtics did in a 4th quarter that, barring a miracle, had reached HAMMER, NAIL, COFFIN levels by the final four minutes of the frame. And I don’t see anyone named LeBron James on that Chicago roster.

As the Cs lead returned to 20-give-or-take and stayed there with two minutes left, Hoiberg sent his bench’s dregs out and effectively conceded. Cameron Payne and Joffrey Lauvergne bricked shots, Anthony Morrow reminded me he was A Person Who Exists. On the Celtics end, Terry Rozier and James Young took a few why-the-fuck-not 3s until the buzzer sounded and Boston walked off court with a 104-87 throatpunch victory.

Not a lot, really. The rebounding problem is what it is. It won’t change until the roster does. There were some sloppy turnovers and this team can slack off at inopportune times, but aside from Chicago’s offensive burst in the second quarter, Boston held the driver’s seat all the way through.

Sit down. Be humble.

Isaiah didn’t score a lot tonight, but he did when it counted. Observe.

This was undeniably a team win, so showcasing specific stat lines does players’ contributions a disservice by divorcing them from context. That said, Al Horford with 18-8-6 plus 4 steals and a block killed notions of him being a poor fit for this series,Avery Bradley‘s 15-7-7-with 2 steals is a great multifaceted line, and Jae Crowder led the team with a +23 alongside 16-6-3 and a steal.

Takeaways and Throwaways - Pirates win 6-3, Cool Off the Yanks

The Pittsburgh Pirates beat the New York Yankees 6-3 thanks to timely offense and great bullpen pitching. Welcome to Takeaways & Throwaways. Shortly after every Pittsburgh...