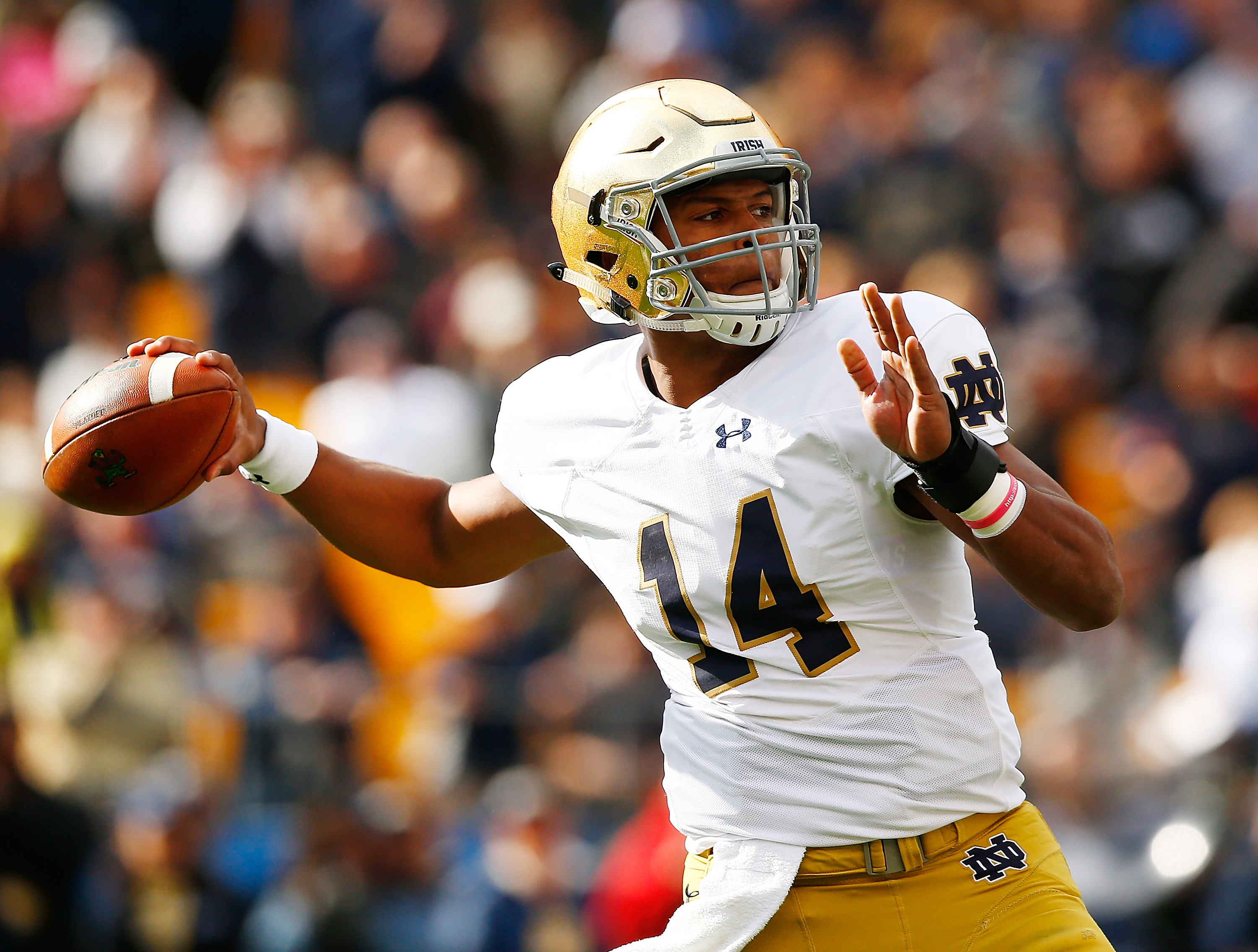 Of all the quarterback prospects, DeShone Kizer may be the winner in the “most talked about” category. Kizer probably has the biggest upside of any quarterback in the NFL Draft, but his ability to put it all together at the next level is a significant question for NFL teams. Some of the talk surrounding Kizer is out of his control. His coach, Brian Kelly, spoke about Kizer in an interview with XM radio, saying “He should still be in college. He needs more time to grow in so many areas, not just on the field but off the field.” Kelly’s comments were likely an indication of why many teams are wary of devoting a high pick for Kizer.

And then there was Thursday, where Kizer spoke about himself in an interview with USA Today: “Imagine taking (Tom) Brady’s intellect and Brady’s preparation and putting it on a guy with Cam Newton’s body. Why can’t I be the greatest? The only thing stopping me from it is me. That’s what’s driving me now.”

Kizer took to twitter to let the world know that his words were somewhat minced. Even so, Kizer’s confidence in himself seems pretty bold.

Sheesh😳 Way out of context… but alright https://t.co/6zGztV08Bu

With all the talk surrounding Kizer, it seemed appropriate to take a look at what NFL teams seem to be a fit for his talents moving forward.

Most mock drafts have Kizer going in the late first round, while some have Kizer staying on the board until early part of day two. Realistically, every NFL team has a shot at drafting Kizer, but a few stick out based on team needs, fit, and draft positioning.

INDIANAPOLIS, IN – AUGUST 22: Head coach John Fox of the Chicago Bears looks on against the Indianapolis Colts in the first half of a preseason game at Lucas Oil Stadium on August 22, 2015 in Indianapolis, Indiana. (Photo by Joe Robbins/Getty Images)

It would be a lot of fun to see Kizer in Chicago, a city that has strong Notre Dame ties. The Bears recently parted ways with Jay Cutler and are clearly looking to turn the page as a franchise. The Bears brought in Mike Glennon and Mark Sanchez via free agency, but it would still make a lot of sense for them to look to establish some youthful quarterback depth and competition at some point.

The Bears are likely looking to fill other holes with the third overall selection, but Kizer could conceivably be available when the Bears select 36th overall.

GLENDALE, AZ – DECEMBER 27: Quarterback Carson Palmer #3 of the Arizona Cardinals makes a pass in the first half of the NFL game against the Green Bay Packers at the University of Phoenix Stadium on December 27, 2015 in Glendale, Arizona. (Photo by Christian Petersen/Getty Images)

The Cardinals have the 13th selection of the first round. This might be the earliest realistic projection for Kizer, as a match with the Cardinals makes a lot of sense for both parties. Kizer would enter into a situation where he would not be tasked with playing early, as Carson Palmer will take the majority of the snaps early in the season. However, with Palmer’s health always in question as he ages, the Cardinals have a need for a solid backup.

This situation would allow Kizer the opportunity to develop behind a veteran and enter into a stable franchise from day one. There is also a high probability, given Palmer’s age and health, that Kizer (assuming he becomes Arizona’s backup) gets a start or two to get his feet wet.

Truthfully, pick 13 seems a little early for Kizer to go and it seems less likely that Kizer is on the board when the Cardinals pick again with the 45th selection, but the Cardinals could love Kizer enough to stretch for him or finagle a trade to land him in Arizona.

GREEN BAY, WI – AUGUST 12: Cody Kessler #5 of the Cleveland Browns drops back to pass in the third quarter against the Green Bay Packers at Lambeau Field on August 12, 2016 in Green Bay, Wisconsin. (Photo by Dylan Buell/Getty Images)

It is no secret that the Browns has have their fair share of quarterback problems since they returned in their expansion season. The Browns also have ample opportunity to select Kizer, if they want him. Though it seems that they are more enamored with Mitchell Trubisky, Kizer would likely be a good consolation prize should the Browns miss out or decide to go elsewhere. Kizer also visited the Browns facility in early April.

Can confirm that former #NotreDame QB DeShone Kizer is on a visit with the #Browns today.

The Browns will not be selecting Kizer first overall. Kizer is in play with the 12th overall selection, however, although it seems that the 12th pick would be a reach. The more likely scenario is that the Notre Dame quarterback is the first player off the board on day two of the draft when the Browns select with the 33rd overall pick. Still, another scenario could be that the Browns use their many assets to jump into the early twenties to select Kizer before teams like the Texans get a crack at him.

Kizer would make a decent amount of  sense for the Browns, who will be looking at Brock Osweiler and Cody Kessler for the starting job. The Browns have a re-vamped offensive line and are assembling some weapons that would make Kizer’s life a little easier. Finally, Kizer hails from Toledo, Ohio, about 115 miles to the west of Cleveland.

HOUSTON, TX – DECEMBER 18: Tom Savage #3 of the Houston Texans scrambles out of the pocket as he looks for a receiver in the second quarter against the Jacksonville Jaguars at NRG Stadium on December 18, 2016 in Houston, Texas. (Photo by Bob Levey/Getty Images)

This may be a perfect fit for Kizer. The Texans have had a lot of success the past few years, riding the coattails of a dominant defense lead by JJ Watt. Even without Watt in 2016, the Texans posted a 9-7 record. Without a doubt, the biggest glaring weakness for the Texans is the quarterback position. Moreover, Kizer seems to fit the mold of what the Texans want in a quarterback, given the money they gave to Brock Osweiler before last season.

Osweiler is gone in Houston and given that Tom Savage (who performed admirably last season) and Brandon Weeden are the only two quarterbacks on Houston’s roster, it seems likely that the Texans will look to add to their quarterback depth.

Houston would give Kizer a chance to compete for the job early and would also reunite him with Will Fuller, who Kizer seemingly found time and time again in clutch situations in 2015 before Fuller left school a year early. With the 25th selection, it would make a lot of sense for Houston to take a long look at Kizer if he is available.

CINCINNATI, OH – JANUARY 09: Ben Roethlisberger #7 of the Pittsburg Steelers throws a pass against the Cincinnati Benglas at Paul Brown Stadium on January 9, 2016 in Cincinnati, Ohio. (Photo by Andy Lyons/Getty Images)

Ben Roethlisberger flirted with retirement this offseason, largely due to the fact that he has been banged up seemingly every season of his career. The Steelers have been woeful when they have had to rely on their backups in Roethlisberger’s absences. It would only make sense that the Steelers would look begin to look for Roethlisberger’s eventual replacement.

Kizer fits the mold of what the Steelers do best on offense. He is a big, athletic quarterback, with a strong arm that will fit well in the AFC North. Furthermore, there probably isn’t a better situation for Kizer. If he is called upon due to a Roethlisberger injury, he will have the luxury of playing alongside the likes of Le’Veon Bell and the league’s best receiver, Antonio Brown.

Teams looking for potential replacements for aging quarterbacks such as the Saints and Giants could be in play for Kizer. The Saints select 11th overall, 32nd overall, and 42nd overall. The Chargers may be in the same boat. They select 7th overall and 38th overall.