Playbook: Staggering the Bulls into submission 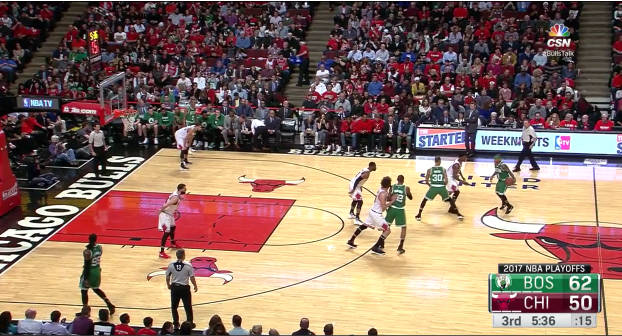 Now that our collective sighs of relief have been exhaled, let’s look at one way how the Celtics put the Bulls away last night.

One thing the Celtics did a lot of in that decisive 3rd quarter stretch was run a simple stagger screen… something that worked well thanks to Brad Stevens’ decision to play Gerald Green.

Here’s the set up: The Celtics ran this play in three different areas of the floor, but the concept is the same. Isaiah Thomas has the ball and Green sets the initial pick and flares out. Al Horford sets a second pick and then reads the defense to either pop or roll. Jae Crowder and Avery Bradley are shooters who spread the floor. Once Isaiah comes off the stagger screen, the world is his oyster. This puts a ton of pressure on the Bulls defense. Everyone on the floor can hit a 3, so there’s all sorts of space. Horford is too smart and can read exactly what’s happening to fill whatever gap the Bulls leave open. And Isaiah Thomas is Isaiah freakin’ Thomas. Here are a few examples of how it was used.

The Bulls put Jimmy Butler on Isaiah. That’s no good… let’s change that…. The stagger puts Butler on Isaiah’s back, which is perfect. He can’t use his size to challenge the shot, and Isaiah’s on his way to the rim. Green doesn’t really space the floor perfectly (He should move down to the corner) but that’s ok… Robin Lopez hedges over to stop Isaiah’s penetration… Dwyane Wade has Horford for the moment but he has to account for Green… so he pops out to protect the 3 point line. Isaiah sees Lopez coming over hard to stop him… which means Al Horford is all alone. Bucket. RoLo’s momentum is going the wrong way and Al has a super-clean look in the lane.

Next time down… the Celtics set this play on the other side. Green hits the pick just right and Isaiah actually took this shot, so this is an example of a way he can free up to take a 3 off this action as well: Next time down, same set up: This time Gerald goes all the way into the corner, taking Wade with him. Michael Carter-Williams is trailing the play badly, which puts pressure on Lopez to come up and stop Isaiah. Horford sees it and rolls. Isaiah sees it too. Notice, there is literally no defender in the lane at this moment thanks to the three shooters on the floor. That’s called spacing, folks…. This is what happens when you don’t have anyone in the lane when a point guard has already released a bounce pass to a rolling big: Again, the goal of getting Butler on Isaiah’s hip is achieved. The Celtics have neutralized Butler’s biggest advantage in defending Isaiah, his size, and given Isaiah a chance to use his speed and quickness, which he turns on here: He’s left Butler in the dust, and now he’s got Lopez on his hip too. Now TWO Bulls defenders need help, forcing a third Bull, Mirotic, into the action. Now there are not only two great options open, the two guys who got beat are working so hard to get back into the play that they’ve overreacted. Al Horford becomes the beneficiary again… This is where the Bulls really miss Rondo. He’s much better at playing this than anyone else on Chicago. Whenever the Bulls have Butler on Thomas, the Celtics can trot out a stagger screen with all this shooting to get Isaiah into some space. Lopez doesn’t have the foot speed to keep up when IT turns the corner and the Bulls don’t have the personnel to switch everything like the Celtics would in that scenario. And if Chicago decides to go with someone else on Thomas, they can just run a traditional pick-and-roll with Horford.

And all of this because Gerald Green is out there as a fourth shooter. It could work with Olynyk too, but Green adds one of Chicago’s poorer wing defenders into the mix, which helps all of this flow quite nicely. Proving, once again, that Brad Stevens is smarter than all of us.

Oilers Gameday vs San Jose: For Whom The Bell Tolls

After an incredible come from behind win on Thursday at Rogers Place, the Oilers are poised to win their first playoff series in 11 years....