The Timberwolves Case for Jonathan Isaac 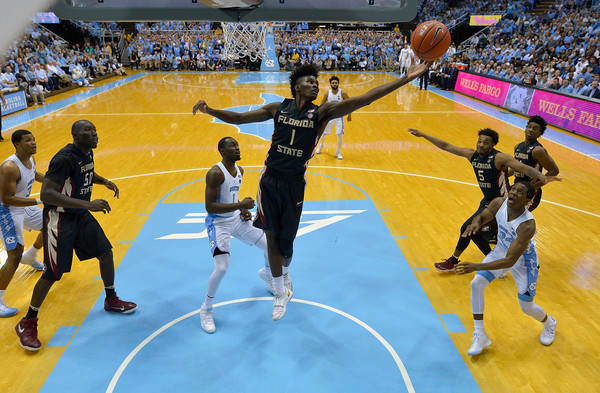 The 2017 NBA Draft has been touted to have one of the most talented draft classes in years. Washington point guard Markelle Fultz, Kansas small forward Josh Jackson and UCLA point guard Lonzo Ball headline the class as the consensus top three prospects. However, after those three, all bets are off. There is a high level of variation among the rest of the lottery picks, leaving the Minnesota Timberwolves with an interesting decision as there is a strong possibility they will be awarded the sixth pick from the 2017 NBA draft lottery.

The player that should be at the top of Timberwolves fan’s wish lists is Florida State small forward Jonathan Isaac. Isaac has one of the highest ceilings in the draft and would be a great fit on the Timberwolves. Here are Isaac’s strengths, weaknesses and how he fits within the current Timberwolves roster.

Strengths: Isaac shines on the defensive end of the court as he finished sixth in the ACC in both defensive rating and block percentage. He can protect the rim from the weak-side as well as guard multiple positions on defense. This gives him the ability to switch on nearly any pick ‘n’ roll situation.

At 6’10, Isaac moves fluidly for his size and has shown he can play both inside and on the perimeter making him an ideal stretch four. Isaac also plays well without the ball as he makes instinctive cuts to the basket for easy points.

Isaac can also create space off the dribble and get off his shot over defenders. Isaac isn’t a great shooter yet, but he did shoot nearly 35 percent from the three point line last season and there is no reason he couldn’t further develop his shot as a pro.

Weaknesses: While Isaac is 6’10, he hasn’t fully developed into his frame yet. He lacks lower and upper body strength and wasn’t able to absorb contact well in college. Isaac also isn’t crazy athletic. He doesn’t have a quick first step and doesn’t explode vertically when going to the basket or skying for a rebound. In the video below Isaac does get by his defender and finishes at the rim, but his first step is sluggish and the contact affected his shot quality.

While power forward Gorgui Dieng is serviceable, he isn’t a threat to score outside of 18 feet and can’t create off the dribble. Dieng’s lack of shooting and scoring ability made it easy for defenders to double center Karl-Anthony Towns in the post and leave Dieng open while he was on the perimeter. If Isaac played the power forward position as a stretch four, it would force defenders to choose whether to double Towns and leave Isaac open on the perimeter or cover Isaac leaving a one-on-one opportunity in the post for Towns.

The extra spacing would give point guard Ricky Rubio more room to create offenisvely as Isaac’s defender would be reluctant to sag off and help as he is a serious threat to score. Many times last season Dieng’s defender would clog driving and passing lanes knowing Dieng wasn’t dangerous offensively.  With the addition of Isaac in the lineup, Rubio will have more scoring threats to distribute the ball to on the perimeter. If any off ball defender helps on Rubio as he attacks, shooting guard Zach LaVine, small forward Andrew Wiggins or Isaac will likely get an open three which they are all capable of making.

The Timberwolves obviously have other needs to address like shooting and veteran leadership, but those can be found in free agency. Los Angeles Clippers shooting guard J.J. Reddick and Cleveland Cavaliers small forward Kyle Korver are two of many veteran shooting specialists with playoff experience the Timberwolves can target in the offseason. The upside and fit of Isaac is too much to pass up in the draft and isn’t something the Timberwolves will find in free agency.

Logan Metzger is a contributor to HowlinTwolf.com. Follow him on Twitter:@loganmetzger33

Sox Get Blanked by O's in Series Opener

The Sox came into Baltimore for a 3 game series against the Orioles.   The Sox looked to try to take over the top of the...