Pens vs. Caps X's & O's Breakdown: What to Watch For 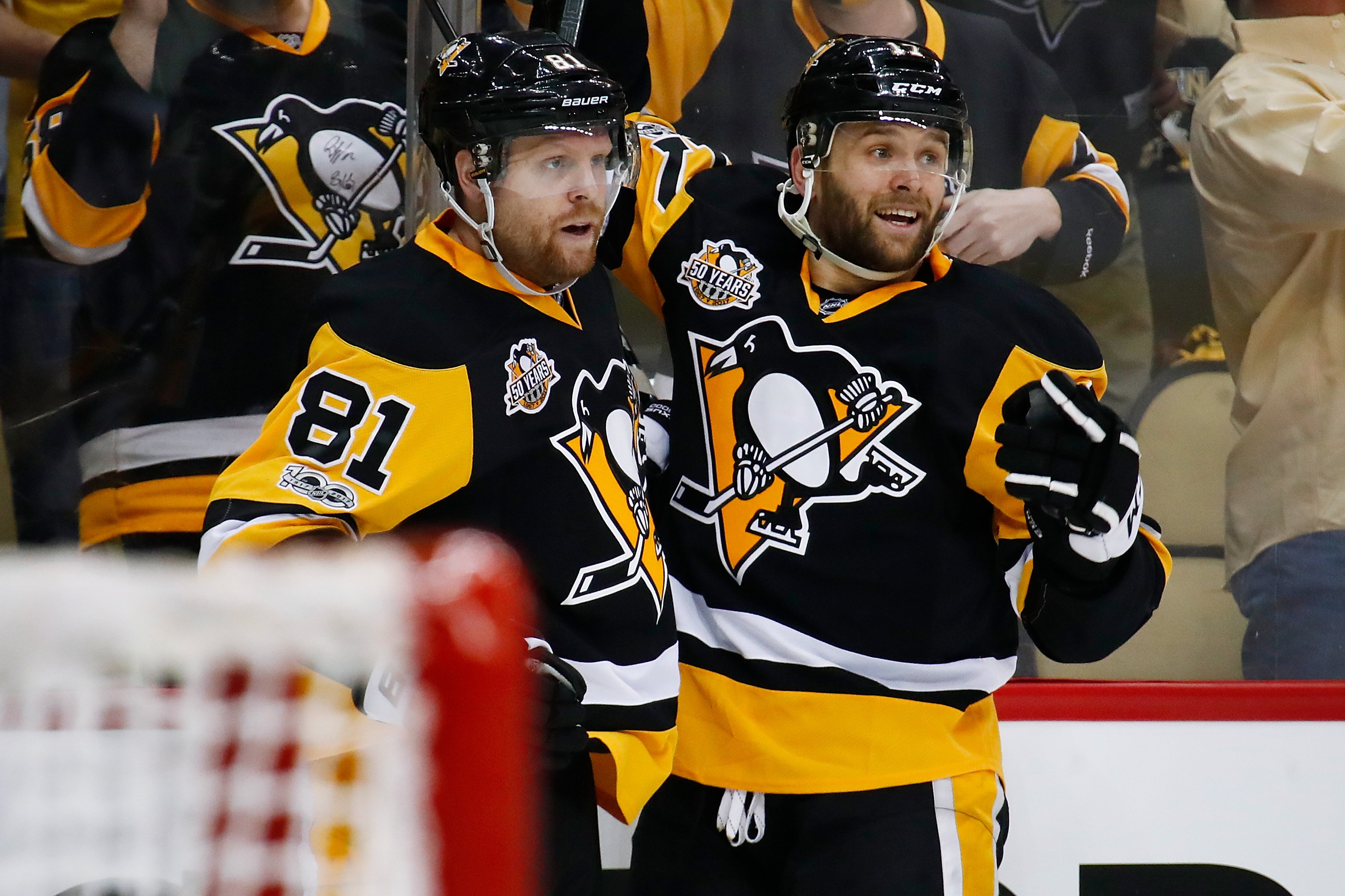 Pens vs. Caps X's & O's Breakdown: What to Watch For

The Penguins and Capitals have a lot in common from a systematic standpoint. In fact, in a lot of ways, these teams are staring at mirror images of each other as far as structure and approach to play is concerned.

Familiarity breeds contempt, and if the video from the first round tells is anything, it’s that time and space are going to be at a premium as this encore presentation of last years playoff series gets underway on Thursday.

With that in mind, I wanted a take a moment to highlight the key areas of these teams systems and how they match-up from an on-ice perspective. We’ll take about areas of potential and advantage and concern from a Penguins-centric perspective.

When you have teams that play styles of hockey that are this similar to each other, whoever executes the fine details better likely ends up the victor. There are a ton of nuances to these styles of play, but overall, these are day one systems. Neither Barry Trotz nor Mike Sullivan has reinvented the wheel. These are two extremely talented hockey teams that are, for all intents and purposes, playing simple systems that are as habit to them as waking up in the morning.

Let’s dive into some video and highlight some areas of note.

The Capitals and the Penguins employ a strategy called a Strong-Side Overload, also known as a Half-Ice Overload because the structure splits the ice into two even halves, as we’ll see below.

The idea behind this system is to flood the puck-side of the ice with more bodies than the other team. This effectively accomplishes several goals. It takes time and space away from the opposition, it can give your team a numbers advantage, and it can make working the puck to key areas of the ice extremely difficult because of the mess of bodies it puts into key lanes. This is a stifling approach to play designed to keep any potential shot-attempts to the outside of the ice away from the slot and high-danger areas. Let’s take a look at how it manifests itself on paper:

In the example above, the attacking team (denoted by the red X’s) has possession of the puck and is trying to establish a cycle along the wall. The defending team (denoted by the black text) will flood its forwards and defensemen into a tight pact along the wall, looking to clog up cycling lanes and drive a wedge into the attacking team’s puck support.

The defending team puts itself in a position to outnumber the opposition at any area along the boards. This gives the defending team a numbers advantage in puck battle situations. This system also gives the team two aggressive defending options against shots from the point, as the F2 and F3 have direct lanes to get to the blueline and provide pressure.

If the play in this sequence were to reverse and come to the near boards, the D1 and F3 immediately make chase, and the overload flips to the other side of the ice in the same posture. The F1 assumes their position in-between the defense and forward combination that has flooded the other side of the wall.

For the Penguins, this has been their bread and butter all season long. You can see this system in action in the below sequence:

In the above sequence, the Penguins flood the wall in the Strong-Side Overload posture, ready to break up any potential cycle created by the Boston Bruins. In any given potential puck battle situation, the Penguins have the numbers along the wall to outman the Bruins and drive a wedge right into their cycle attempts.

Because of their sheer advantage in numbers, the Penguins can apply a ton of pressure to the Bruins, taking away the precious commodities of time and space that make the backbone of any offensive system.

The man-power support that comes from this style of play also aids in zone exits. The Penguins have several breakout options in this sequence and having players in such a close proximity to one another allows them to touch-pass across the defensive blueline before the Bruins have a chance to get set up defensively.

Let’s take a look at some quick clips of the Capitals in the same structure:

In the same vein as the Penguins, the Capitals look to flood the Maple Leafs attack and put themselves in a situation where there are more red jerseys on the puck than white jerseys.

The only noticeable difference in approach here is these teams willingness to branch out and be aggressive. The Capitals will routinely press the point and spread their overload out. They’re extremely adept at hitting the point of attack and taking away D-to-D passing options along the point.

Conversely, the Penguins tend to stay more compact. For their approach, clogging the shot lanes with bodies and sticks is more important than pressuring D-to-D passes along the top of the offensive zone. The Penguins don’t take it as far as to insulate their goaltender, but they don’t go chasing pressure too far up ice.

This system will certainly make it tough on Crosby and Malkin, but it’s also the type of system they can relish playing against as well. Quick tape-to-tape passes can exploit open areas of the slot. While the Capitals boast a roster of players capable of exploiting these same areas, the Penguins have made a living off of it this year. If you think about all the things Crosby and Malkin dominate at; board play, operating in tight spaces, and working the puck into high percentage scoring chances are chief among them.

A potential problem area for the Penguins here is their zone exits. Against the Blue Jackets, the Penguins committed way too many turnovers when attempting to work the puck out of their own zone. The Capitals forward group is masterful at maintaining pressure and keeping the play alive offensively. They continuously found extended shifts against the Maple Leafs in round one. If the Penguins are going to win this series, this is an area that needs to be cleaned up. They cannot gift the Capitals pucks in their own zone. On the flip side of that, the Penguins offensive pressure is something of an anomaly as well. The Capitals defense will be tested this series in a serious way, especially considering the Penguins extended break and fresh legs they’ll bring into this series.

How do the Penguins attack the Capitals?

Another potential similarity between these teams is how each approaches their neutral-zone forecheck. I say potential, because Mike Sullivan has armed the Penguins with a few different looks in terms of how they approach play between the bluelines.

The Penguins typical approach to neutral-zone play, like the Capitals, is the 1-2-2 forecheck.

You’ve heard the term “trap” before, and this system is the meat and bones of it. However, neither one of these teams use this system to slow the play down and muck up the neutral zone like the 2001 New Jersey Devils. These teams want to limit the oppositions opportunities for finding space in the middle of the ice, ultimately forcing turnovers that send their talented forwards off to the races in the other direction.

This system puts token pressure on the defense, forcing them to play to a side of the ice that is completely covered by a forward and a defenseman. If teams try to go up the middle, you can collapse the forwards and defensemen on them to suffocate the puck carrier in the neutral zone.

Here’s a look at the Caps in this structure against the Maple Leafs:

This is a great example of the lack of space allowed by the 1-2-2. The Leafs attempt a simple D-to-D pass, forced by the forechecker, and the Caps meat of their trap forces a turnover that sends them off in the other direction.

The question is whether or not the Penguins will run this same approach, as they have against the Capitals in every game under Mike Sullivan’s tenure, or if they’ll opt to keep the same approach they had in the Columbus series, where they employed a 2-1-2 forecheck.

This approach can be a double-edge sword, however. The more forecheckers you send into the offensive zone, the less coverage you have behind them. A talented team like the Capitals can take full advantage of that.

Both the Penguins and the Capitals allowed more scoring chances and shot-attempts in the first round than they’d have liked. Does Mike Sullivan opt for his reliable approach in playing it safe, or does he send the Penguins on the loose and attack the Capitals at the point of the breakout?

For me, given the way the Capitals breakout works, and how effective it is at gaining speed through the neutral zone, opting to play a 2-1-2 might be a little too risky. In addition to that, the Penguins 1-2-2 effectively shut down the Capitals breakout last year and stymied their ability to generate odd man breaks and clean zone entries.

If both of these teams roll out the 1-2-2 forecheck, space will be at a premium in this series, and the team that takes care of the puck best will be that much closer to winning the whole thing.

At any rate, these two teams are extremely similar in how they approach the game. They’ve been employing these systems and practicing these systems for seven months. As I mentioned at the start of this piece, this is a habitual approach to play from two of the best teams in the league.