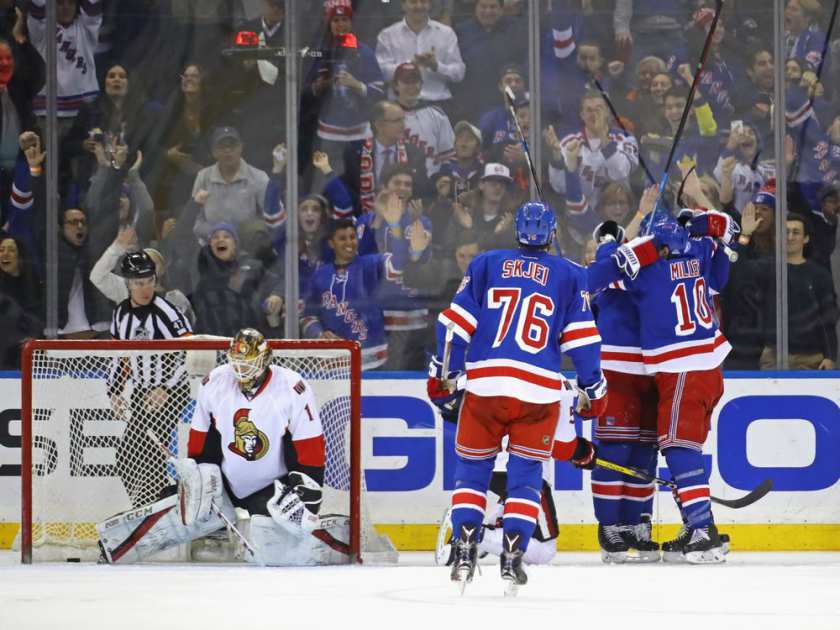 This is exactly why we wanted the Rangers in the Atlantic Division bracket. The Blueshirts are now in position to advance to the Eastern Conference Final without having to face either Washington or Pittsburgh. While Ottawa isn’t a pushover by any stretch of the imagination, I’m pretty sure every Rangers fan is ecstatic with the current postseason scenario.

While I don’t expect this series to take on the mean streak we witnessed against Montreal, the Rangers may again find it difficult to generate transition offense as Ottawa is known for being able to stifle opponents attacking with speed through the neutral zone.

If the Rangers are able to get pucks deep, establish a forecheck and cause turnovers they may be able to loosen the Senators trap game in order to implement Alain Vigneault’s fast paced style.

So let’s take a look at this second round series which matches the Rangers and Senators for the first time in the postseason since 2012.

Not sure if you remember, but Derick Brassard is pretty good in the playoffs.

Derick Brassard had 8 points in 6 games that series. At no point during regular season did he get 8 points in any 6-game span. #BigGameBrass

Brassard lives for the spotlight. The bigger the moment, the more he thrives. And now that he has the opportunity to put away his former employer, expect big things from Zuccarello’s BFF.

That is, of course, unless Brassard decides to finally choke on the big stage.

Meanwhile, after struggling to get his feet underneath him to start this postseason, the Rangers return in the Brassard trade is doing his best to force Rangers fans to forget “Big Game Brass”… How good is Erik Karlsson? The guy just dominated the Boston Bruins (6 assists), then after the series was over announced he was playing with two hairline fractures in his foot.

While Karlsson isn’t your prototypical shutdown defenseman, the two-time Norris Trophy winner is so effective defensively because he always has the puck. And when he does, you better be on your toes because he’ll drop one of these on you without thinking twice…

Similar to the Rangers wanting to stay out of the box against Montreal with Weber looming at the point, the same can be said about Ottawa and Karlsson…

The Ying to Karlsson’s Yang on the Ottawa’s defense is Dion Phaneuf, who has been known to throw a hard hit every once in awhile. Just ask Michael Sauer (sorry, Rangers fans)…

Having said that, the more Phaneuf is on the ice (averaged 25:42 per game in the first round) the more advantageous it is for the Rangers, who should be able to utilize their speed against the slow footed defenseman.

The Senators mostly rely on their top two defensive pairs of Karlsson/Marc Methot and Phaneuf/Cody Ceci, so if the Rangers continue to roll four lines of skill they should be able to expose a very average bottom third of Ottawa’s blueline.

After proving his detractors wrong against Montreal, the question is: Does Dan Girardi have anything left in his bag of tricks for an encore?

While Girardi finally being healthy was a huge reason for his resurrection in Round One, Montreal deciding to dress a bigger, slower lineup was an undeniable benefit to the Rangers alternate captain.

Ottawa will never be confused for the Canadian Olympic Speed Skating team, but they do have quickness up front that could cause problems for Girardi.

However, if McDonagh can continue his beast mode performance of the first round, it won’t matter if Girardi is suspended in a perpetual snow angel making state the entire series, Ottawa will have a tough time offensively.

Besides Brassard, the Rangers need to keep an eye on Bobby Ryan who turned back the clock to his Anaheim days with 4g, 3a in the first round against Boston after producing just 13g, 12a in 62 games this season. Sure, players such as Mike Hoffman (61 points), Kyle Turris (55 points) and Mark Stone (54 points) had much better offensive numbers this season, but in the playoffs you always have to worry about the hot hand and no forward is hotter than Ryan.

Meanwhile, the return of Clarke MacArthur to begin the playoffs after missing the last two seasons due to concussion symptoms, was akin to the Senators having their own personal free agency period at the close of the regular season. And MacArthur has paid immediate dividends as he scored the series clinching goal in overtime of Game 6 to send Ottawa into the 2nd Round.

After such a memorable goaltending showdown between Lundqvist and Price in the first round, I can understand the letdown of this goaltending matchup. But don’t sleep on Craig Anderson. Not only does he similarly own the Rangers the way Price has during his career (10-5-3, 1.74 GAA, .944 sv% and 4 shutouts), he’s also playing with emotion as he’s missed portions of the season while caring for his wife who is battling cancer. Never underestimate the power of motivation triggered by an ailing loved one.

Anderson, who was 4-2 with a 1.96 GAA, .921 sv% & 1 shutout vs. Boston in the 1st round, is an opposing goaltender who you most definitely underestimate going into the series, but by Game 4 you’re left wondering why your team can’t beat him. This is confirmed by his .931 sv% in 33 playoff games. To put that number in perspective, Lundqvist has a career .923 sv% in the postseason. He’s legit, as the Rangers learned in their 2012 postseason matchup when Anderson posted a 2.01 GAA, .933 sv% and 1 shutout…

While there’s very few holdovers from the 2012 playoff meeting, if you remember, that series got ugly and it got ugly fast. It all started with Brian Boyle roughing up a young Erik Karlsson in Game 1. Then all hell broke loose in Game 2 as the Senators dressed Matt Carkner to exact revenge…

That scrum led to one of the great all-time Rangers moments: The Dubinsky Gatorade Slam.

Later in that same game, Chris Neill challenged Brian Boyle and it was officially on.

With the series tied at 2-2, Neill became Public Enemy #1 with this predatory hit on Boyle that knocked him out of the series with a concussion…

To add insult to injury, the Senators went on to win Game 5. However, the Rangers would get the last laugh as they not only overcame the 3-2 series deficit to advance, but they pounded Neill for the final two games…

As far as the 2017 version of this matchup, with Neill now a regular press box resident in Ottawa and Carkner likely a used car salesman, I don’t anticipate this level of fireworks. But hey, with the Senators employing Alex Burrows, you never know.

After Kreider’s disasterous first round performance, hopefully the sight of Ottawa will conjure up memories of his first NHL goal during the 2012 postseason to reignite his mojo.

Ottawa killed just 11 of Boston’s 16 power play chances in Round 1, so the Rangers struggling extra man units should have significant opportunity to get back on track.

Isn’t it funny how the expectations for the Rangers have been completely turned upside down going into this series. After exceeding low fan aspirations all year long, suddenly expectations have soared so significantly that losing to the inferior (on paper) Senators would surely turn this overachieving season into a huge disappointment. A series win? Then the Rangers are back to playing with house money in the Eastern Conference Final and receiving all the accolaides that come with it. Expectations, man. Expectations. 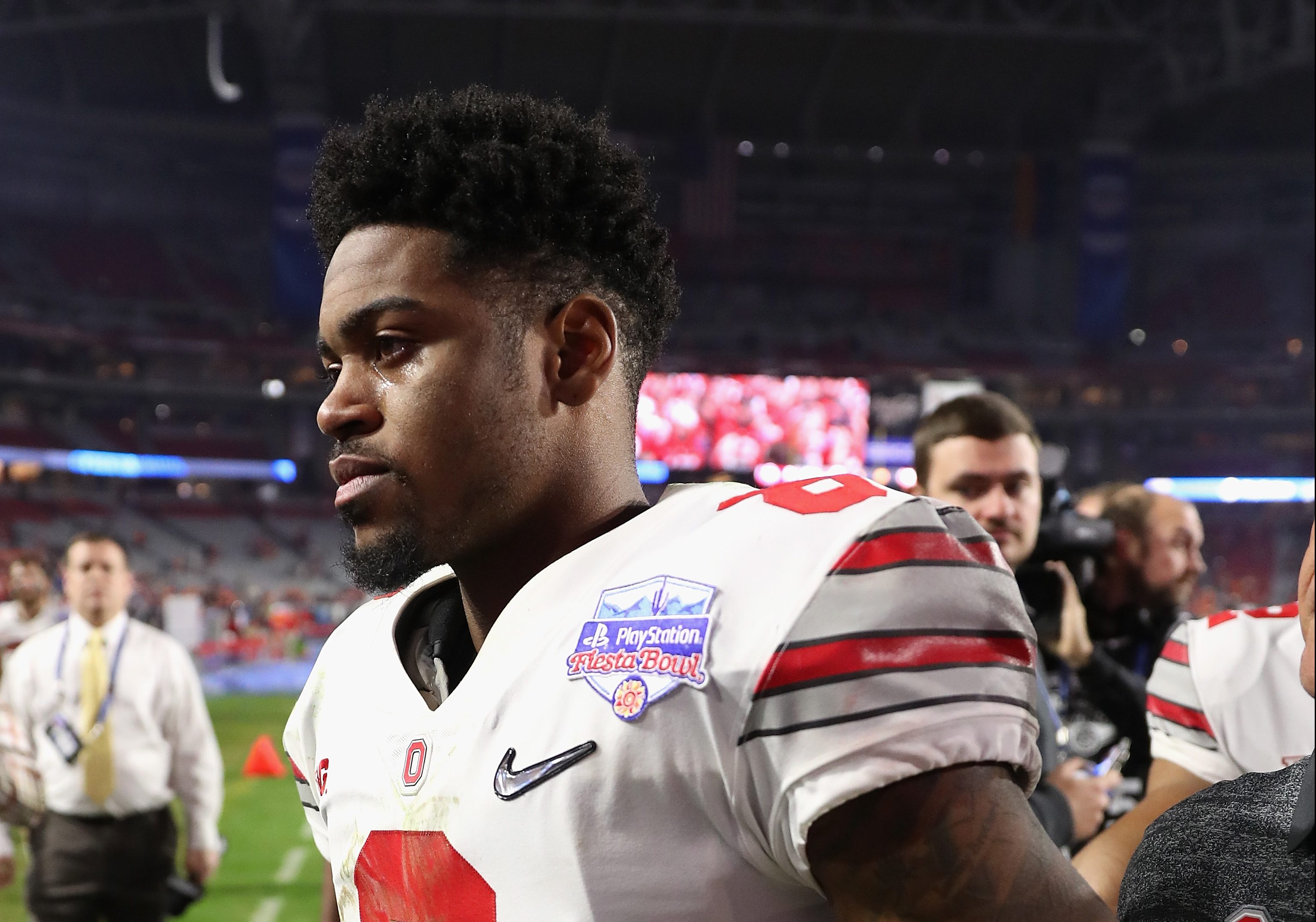 One of the biggest risers on NFL draft boards could be dropping even further than he rose. A 23-year-old woman said in a police report...