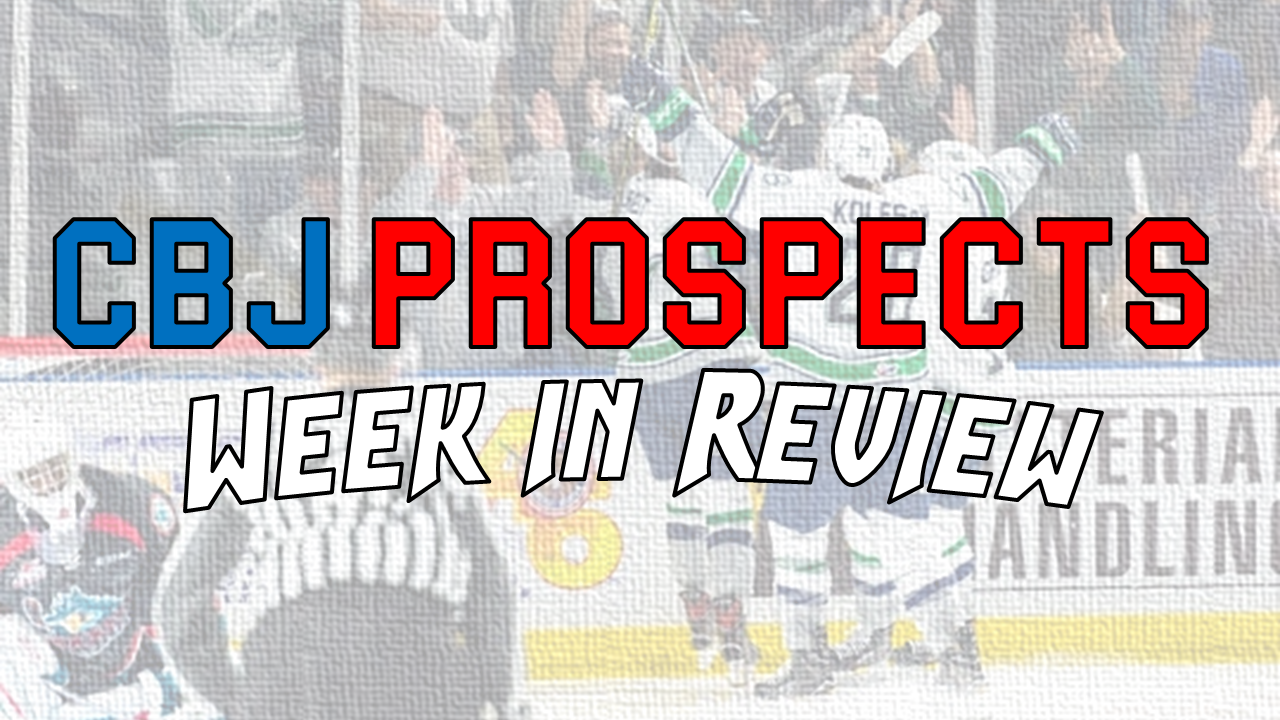 Greetings all, it’s time to recap the Blue Jackets’ four prospects who were still playing in the Canadian Hockey League’s playoffs.

Dante Salituro-London Knights (OHL, Lost to Erie 4-3)
Series Stats 7GP 0-0-0 +1 6PIM
Final Playoff Stats 14GP 0-2-2 +3 8PIM
As you can see above, I don’t have much to talk about Dante in the Knights seven game series loss to Erie. After collecting 22 points in in 30 regular season games, Dante went quiet in the playoffs collecting only two assists in a seven-game series.

In his OHL career, Dante collected 282 points in 295 games played with Ottawa and London. As for next season, Dante should be in Cleveland.

Pierre-Luc Dubois-Blainville-Boisbriand Armada (QMJHL, Defeated Acadie-Bathurst 4-3)
Series Stats 7GP 4-7-11 +3 10PIM
Playoff Stats 12GP 6-10-16 +6 14PIM
After collecting three points in three first round games, PLD showed in the second round why the Armada made him one of their big deadline pickups. Starting off in game one against the Acadie-Bathurst Titan, in part of a wild first fine minutes, with the game tied at one, PLD got the puck out of a board battle and sent it to Alexandre Alain who fired a shot. Yvan Mongo capitalized and made it 2-1 all before the four minute mark. PLD scored very late in the game when a Titan defender misplayed the puck and Pierre was all over the guy allowing him to slide the puck into the Titan’s empty net all the way from just over the blueline. The Armada won the game 6-2.

Game two was almost all Titan as they took a 4-2 lead before PLD picked up an assist. Late in the third, PLD entered the zone before saucering a pass to Yvan Mongo who skated in, drawing all the defense’s attention, before spinning and passing to Alex Barre-Boulet who fired into an almost empty net to make it 4-3 and tie the series at one.

Game three was a 4-1 Titan win with Dubois going without a point in the game.

Game four was a whole lot of ugly for the Armada but a good game for PLD stat-wise. Very early in the third with Bathurst leading 3-0, PLD streaked down the wing and into the slot before sliding the puck past the Titan goalie to make it 3-1. After two more Titan goals, PLD picked  up an assist on Connor Bramwell’s goal making it 5-2 in a 7-2 game four loss.

Game five was a bounce back game for the Armada, but Pierre-Luc was held without a point in the Armada’s 5-1 win.

Game six start a strong finish of the series for PLD. Early in the first, PLD came off the bench and, while dropping to the ice from a trip, fired a shot. The attempt was blocked but he got the puck back, got up and fired a shot to make it 1-0 Armada. Early in the second, with Blainville on the power play, PLD took a pass attempted a one timer but he fell on the follow through. A teammate gathered the puck and got it to TJ Melancon who skated into the slot and fired a shot to make it 2-0. After a Titan goal, Alex Barre-Boulet dumped the puck behind the net with Connor Bramwell gathering it and finding PLD at the circle where he fired a shot to make it 3-1 in a 4-1 Armada game six win. In the victory, PLD was named first star.

In game seven, PLD had another big night. Early in the first, Pierre raced into the zone and absorbed a hit allowing Alex Barre Boulet to get the puck and take a hit. The puck ended up with TJ Melancon who fired and began some net front chaos where Barre-Boulet finished to make it 1-0. After an Armada goal, PLD picked up his second assist of the night on Barre-Boulet’s second of the night (but it’s hard to tell from the highlights.) Late in the second PLD took a cross-rink pass and fired a shot that was blocked or stopped with the puck going to Barre-Boulet who fired a shot from the goal line and into an almost empty net to make it 5-0 in a 7-1 Armada game seven win.

Calvin Thurkauf-Kelowna Rockets (WHL Defeated Portland 4-1)
Series Stats 5GP 5-5-10 +1 6PIM
Playoff Stats 13GP 6-12-18 +3 18PIM
After a quiet first round, the Swiss Beast was unleashed against the Winterhawks. Starting off in game one, after a scoreless first period, Calvin opened the scoring with his first of the playoffs. Early in the second, Calvin gathered a rebound and skated through the Hawks defense before snapping a shot to make it 1-0 Rockets. Just 45 seconds after the Rockets made it 2-0, Calvin found Reid Gardiner and he made it 3-0 just over five minutes into the second. Late in the period, off a draw, the Rockets skated in on a three on one which became a four on one with Calvin getting the puck and dropping a pass to Dillon Dube who made make it 4-0 in a 4-2 game one win. In the win Calvin was named first star.

Up next in game two, Calvin was held without a point in a 5-2 Rockets victory.

In game three, when the series moved to Portland, Calvin scored both Rockets goals in a 5-2 loss. For some reason, the Winterhawks didn’t post any Rockets goals so I don’t have any highlights to discuss for this game.

In game four, early in the second, off a blocked shot, Calvin gathered the puck and found Reid Gardiner who made it 2-0. Late in the second, just after a penalty shot goal, Gardiner battled with Seth Jones’ little brother Caleb before Gardiner found Calvin who snapped a shot to make it 5-1 Rockets. Just over three minutes later, Nick Merkley was tripped and Gardiner gathered the loose puck before skating in on a two on one and passing to Calvin who buried it to make it 6-1 Rockets in a 7-2 Rockets win. Calvin was named third star.

In game five, Calvin helped open the scoring when, off a draw, the puck went to Reid Gardiner who blasted a shot to make it 1-0 Rockets. In the third period, with the Rockets leading 3-2, Calvin passed to Nick Merkley who found Gardiner for his third of the night in a four goal game. The Rockets won the game 6-2 and were headed into the Western Conference Final against the Seattle Thunderbirds…wait a second we have a prospect in Seattle.

Keegan Kolesar-Seattle Thunderbirds (WHL Defeated Everett 4-0)
Series Stats 4GP 3-3-6 +3 2PIM
Playoff Stats 10GP 7-13-20 +9 10PIM
In this round, the TBirds faced off against division rival Everett and it was a good one right from the start. Just 39 seconds after the Silvertips tied the game at two, Keegan picked up an assist on Donovan Neuls’ game winning goal, but it wouldn’t make the highlight in a 3-2 game one win.

In a 4-3 game two win, Keegan was held pointless before breaking out in games three and four.

In game three, Keegan opened the scoring when he came racing into the zone and attempted a shot off the backhand that was stopped. But the Tips goalie mishandled it and the puck slid past him to make it 1-0 TBirds. The game went to OT and Keegan assisted on the game winner when he blocked a shot that went to Mathew Barzal who scored to make it a 5-4 game three OT win. In the win, Keegan was named third star.

In game four, Keegan was again a star. Just three minutes after Seattle made it 1-0, Keegan made it 2-0 when he tipped in a Turner Ottenbreit shot. In the second period, Keegan picked up an assist on a bang bang passing play with him finding Mathew Barzal who had an almost empty net to shoot into. That score made it 3-0 Seattle. Later in the second after an Everett goal, Aaron Hyman intercepted a Silvertips pass and sent the puck to Keegan who entered the zone and fired a shot from the circle to make it 4-1 TBirds. It was the team’s eighth win in a row in the playoffs.

In the next round, it’s an all CBJ prospect matchup as the Thunderbirds will take on Calvin Thurkauf and the Kelowna Rockets in the Western Conference Final.

Quickly some awards cleanup. In the WHL it was announced that Sam Ruopp will serve as the Western Conference’s representative for the league’s Humanitarian of the Year Award. Sam played a key role in launching the well-received “Literacy and Exercise” Initiative in local Prince George Elementary Schools, that was aimed at promoting literacy and healthy living. Sam’s competition from the Eastern Conference is Lethbridge’s Tyler Wong.

Over in South Bend, Indiana Notre Dame announced its awards and Jackets’ prospect Andrew Peeke was named the team’s Rookie of the Year, a perfect fnish to his strong rookie season which included being the only Dman on the Hockey East All-Rookie Team.

There you have it folks, I’ll be back for at least two more updates since we’re guaranteed at least one prospect in the WHL Finals.