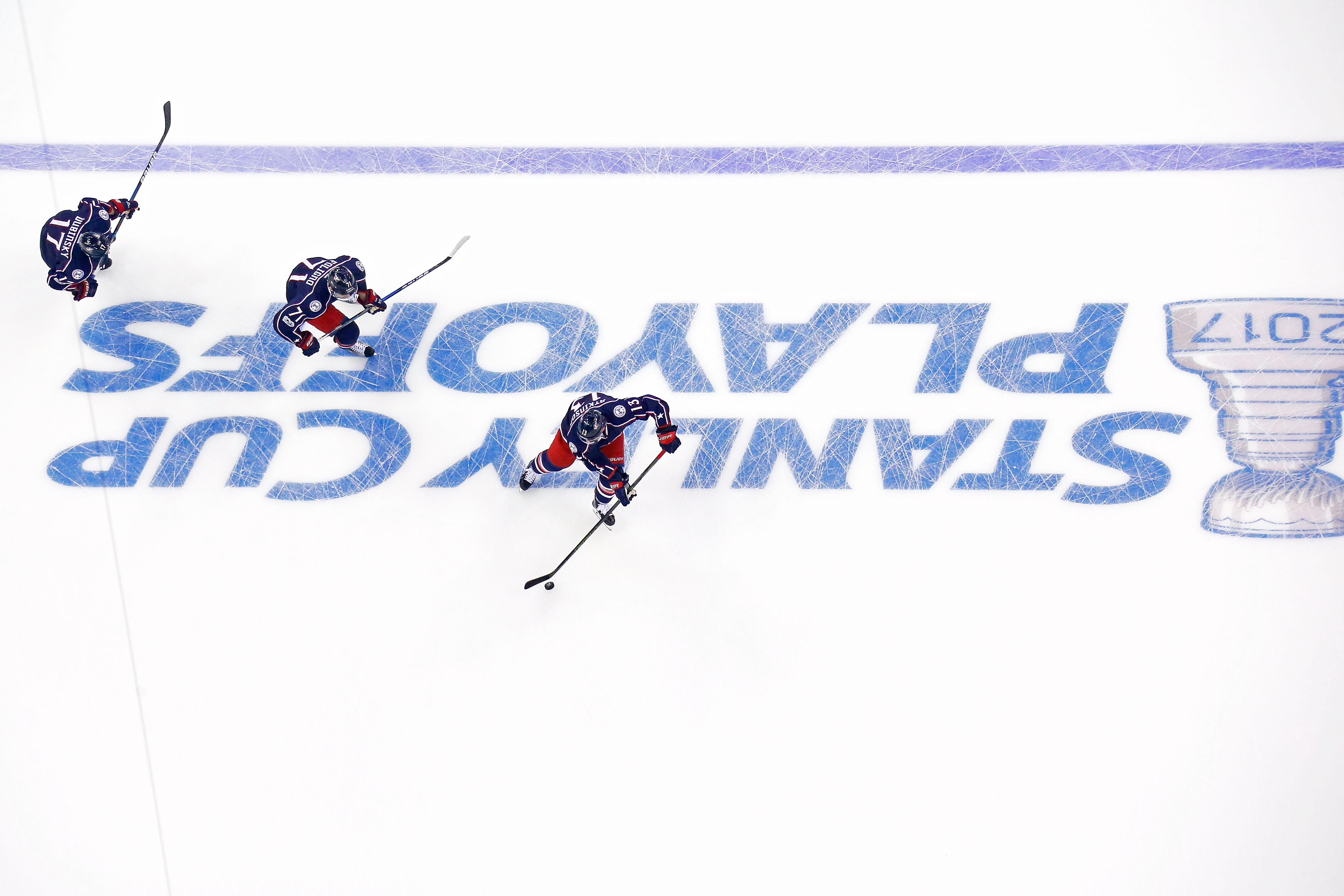 An interesting sub-narrative of the 2017 Blue Jackets-Penguins playoff series evolved around the discussion of shot attempts, scoring chances, and, for some, expected goals.

In summary, the Jackets handily owned the shot attempt battle in four of the five games in both five-on-five play and all situations. It was something that Jackets’ general manager Jarmo Kekalainen and President of Hockey Operations John Davidson both mentioned in their post-season comments.

But, as team management also mentioned, shots aren’t the most important metric, goals and wins are. And it was in those measures that the Blue Jackets faltered.

So Matt and Alison decided to look at the series game-by-game and look at this narrative through a bit more in-depth exploration and dig into more than shot attempts in an admittedly very very small sample size.

It’s important to note that this isn’t an effort to show definitively what led to either team’s success or failure, rather it’s a discussion on the various ways we are learning to examine the game.

Using data from naturalstattrick.com and corsica.hockey, we looked each game on the following measures:

Matt: I think this game gave us a look at part of the injury disadvantage in Pittsburgh, and how the Penguins balanced that with strict defense and elite forwards. The Blue Jackets had the depth to win a lot of shot battles (CF% win), and ended up falling behind in scoring chances (HDCF%) expected goals (xGF%). The “get lots of shots” idea doesn’t take too big a hit, though. Instead, I think we should credit Marc-Andre Fleury for dealing with so many shots (high-quality or otherwise), and finishing with a great SV%. A single bounce off the most harmless-looking shot is enough to change a game, and Fleury didn’t let that happen. Also worth noting: Game One doesn’t seem quite as out of reach if the Penguins aren’t successful on one of their powerplay chances (not included in the 5v5 breakdown). Being down 2-1 instead of 3-1 seems more manageable to me.

Alison: I think you summed this game up best, Matt, when you said the Jackets got all of the shots but none of the bounces. It’s also of interest to me that Bobrovsky had a commanding lead on stopping high danger shots against, it was in overall save percentage where he faltered. The Penguins doubled up the Jackets in terms of high-danger chances, that looks like a difference maker to me. Couple that with the Jackets’ shooting percentage and it really hurt them here.

Matt: Game Two was the Sidney Crosby points show. And that outcome speaks to the razor-thin margin for CBJ error. The Penguins led in most 5v5 categories, so it’s not shocking to see the home team win. The surprising part is the margin of victory (the big GF% difference compared to xGF%), especially without any power play goals to augment the Pittsburgh attack. The CBJ didn’t necessarily deserve a better fate (behind by a fair margin in HDCF%), but there’s only so much a team can do to stop #87. Among NHL forwards, Connor McDavid and Sidney Crosby have some decent separation from the rest of the league in even strength point production over the last few years (per time on ice), and Pittsburgh’s generational player made clear why he’s so special.

Alison: This was truly a continuation of Game One is so many respects. Except here, the Jackets lost the edge on stopping high-danger chances as well. I can’t add much more than you have already – other than, as many a Jacket acknowledged, the Penguins had the talent to capitalize when given the chance.

Matt: Coming in down 2-0 in a series, taking a foreboding 3-1 in-game lead, and losing in OT is a rough one-two-three to zero punch to watch as a fan. I think some of the credit in Penguin shot superiority comes from the visitors’ come-from-behind efforts in the second period. While the Jackets did stop the bleeding in the 3rd period, the shot difference turnaround wasn’t timely enough to prevent 3 goals in the final two regulation frames. Game Three was the first sign of Fleury being mortal, as neither netminder truly excelled. It is worth noting: despite being outshot, the G3 version of the Jackets were only a bounce away from victory in sudden death overtime, a sure sign that hockey is a wonderful and cruel game.

Alison: Kekalainen and Davidson acknowledged this game as the one where the Jackets abdicated the shooting title to the Penguins. But it sure is interesting to see them own some high danger measures. It’s also the first time the Jackets scored more than one goal. This was the game Scott Hartnell pointed to as when the Jackets turned a bit away from just hitting to playing hockey with physicality and it shows in them gaining the edge on many of the measures here.

Alison: Yay! Jackets win! Mike Sullivan said this wasn’t the Penguins best game and it shows here, doesn’t it? The Jackets bested their opponent in all categories. I think in particular of Jack Johnson’s goal shooting the puck into traffic net front. The high danger measures really show here how effective the Jackets were at getting the right kind of chances not just chances. The shooting percentage shows the right kind of regression if you’re a Blue Jacket with the home team making opportunities count. It was also the second game in a row, and third in four games, that Bobrovsky won the battle over Fleury when it came to stopping the high danger shots against.

Matt: If only all of Game Four could have been at 5v5! The Penguins netting another powerplay goal made the game seem closer than even-strength play suggested. (The Pens also scored a “shorthanded” goal near the end of the game with Fleury pulled.) But in that 5v5 time, it was nice to watch the Jackets play so well. Columbus never really went cold and kept pushing along, firing off high-danger shots and potting goals.

Alison: The game of the infamous goaltender interference. We’re not here to debate that call, but it is of interest to me here that the Jackets matched Pittsburgh on both scoring chances and expected goals. Was that power play and the resulting Penguins’ goal a momentum dagger? Seems so.

Matt: One final round of Marc-Andre Fleury being solid across all shot types, and the Blue Jackets facing the wrath of a Penguins powerplay? I feel like it’s a fitting close to the series. Yet again, 5v5 play from the skaters shows a different story than the huge margin of a 5-2 Pittsburgh win: the game could have been close if not for those pesky percentages. And to think, Game Five was another run without Zach Werenski to help push play further in the right for the CBJ.

Alison: I think more than anything this shows the importance of understanding how all different measures fit together to tell a story…and how much more of the story happens outside the numbers we currently have! There is a lot of good here for the Jackets. Heck, the Capitals just out attempted the Penguins in Game One and lost. I also liked the way Jarmo and JD presented this information as proof the organization is looking at this type of thing, but not totally letting it override the most important stat which is wins and losses.

Matt: For me, the data shows how close Columbus and Pittsburgh are, even if the final goal count didn’t work out so kindly. I’ll concede that there’s one big mitigating factor that helps tip shot counts toward the Jackets: the loss of Kris Letang. We’ll never know quite what impact he would have caused in this series. However, any post-series view that labels the 2016-17 Penguins as wildly superior is missing the mark, especially with 5v5 xG totals being so close in most games. Now there is still room for improvement. Special teams were a huge advantage for Pittsburgh, and save percentage didn’t work in the Jackets’ favor. From the 5v5 perspective, though? The Blue Jackets seem to be in striking distance. If Columbus can find ways to maintain or improve their shot work, and manage to avoid percentage drops? It’s not hard to imagine a better fate.