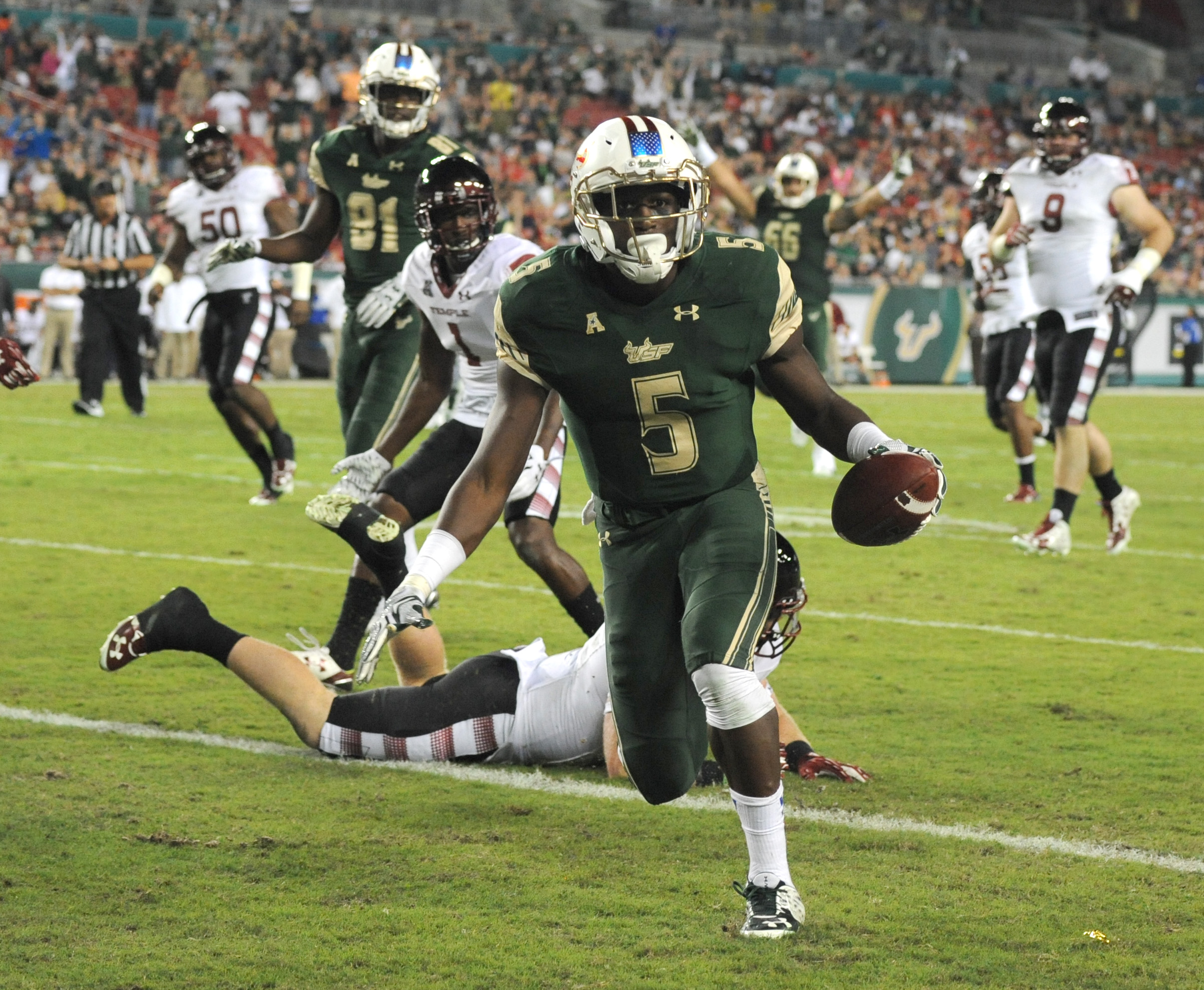 While Colts fans and national media alike have been praising first-year General Manager Chris Ballard’s initial draft class, there is one pick that sticks out in the best way. For years, the Indianapolis Colts have been longing for a talented running back who can consistently carry the rock while taking pressure off of franchise center-piece Andrew Luck. Shuffling between Donald Brown, Trent Richardson, Ahmad Bradshaw, Vick Ballard, Daniel “Boom” Herron, and the corpse of Frank Gore, Colts fans have done nothing but rejoice over the recent 4th round selection of University of South Florida’s Marlon Mack. A darling amongst ‘Draft Twitter,’ the recently-21 year old Mack dominated the American Athletic Conference on his way to becoming USF’s all-time leading rusher with 3,609 yards (a career YPA of 6.15). In addition to the gaudy numbers that Mack put up in just three seasons at USF, there is much to appreciate about Mack’s game… as despite his prototypical size: 5’11” 213 lb. he has an uncanny ability to shed tackles and rip off huge gains on any given snap (just peep his highlight reel).

“The Colts were one of the teams that I knew they liked me. I wasn’t really too sure, but I knew the Colts loved me,” said Mack during a recent conference call. “I remember talking to one of the scouts who said he loved my speed and when I run I hit the second level – my burst.” Mack will be joining a backfield that accounted for one single run of over 20 yards in 2016.

While the soon-to-be 34 year old Gore’s career is winding down, he has still been a moderately productive figure in the Indianapolis backfield, becoming the first Colt to rush for more than 1,000 yards since Joseph Addai did so back in 2007. Despite Gore’s illustrious cumulative career, it is naïve to think that he has much left in the tank, as although he may have rushed for 1,000 yards in 2016, he did so while tied for the lowest YPA (3.9) for running backs with over 1,000 yards. What Gore may lack in his ability to break away long runs or catch passes out of the backfield, he makes up with remarkable consistency as he can be credited with 50 first downs in 2016, which ranks in the Top 15 amongst the position. Gore will undoubtedly still fill a significant role in 2017, however the addition of Mack signifies an impending passing of the torch.

Mack is stepping into a seemingly ideal landing spot with the Colts. Thirteen years to Gore’s junior, the Miami-native Mack is an explosive runner who oozes versatility & will benefit immensely under Gore’s wing. In addition to both hailing from South Florida, it can be assumed that Mack will rely heavily on Gore’s guidance during their time together in Indianapolis. Arguably one of the most impressive qualities in Mack’s game is his proficiency in lining up in a litany of positions. “I see myself as an all-around back, but I’ll start off at third down,” said Mack. “I was used a bunch this past year as a receiver coming in. But over the years, this year was the most I’ve been used as a receiver.”