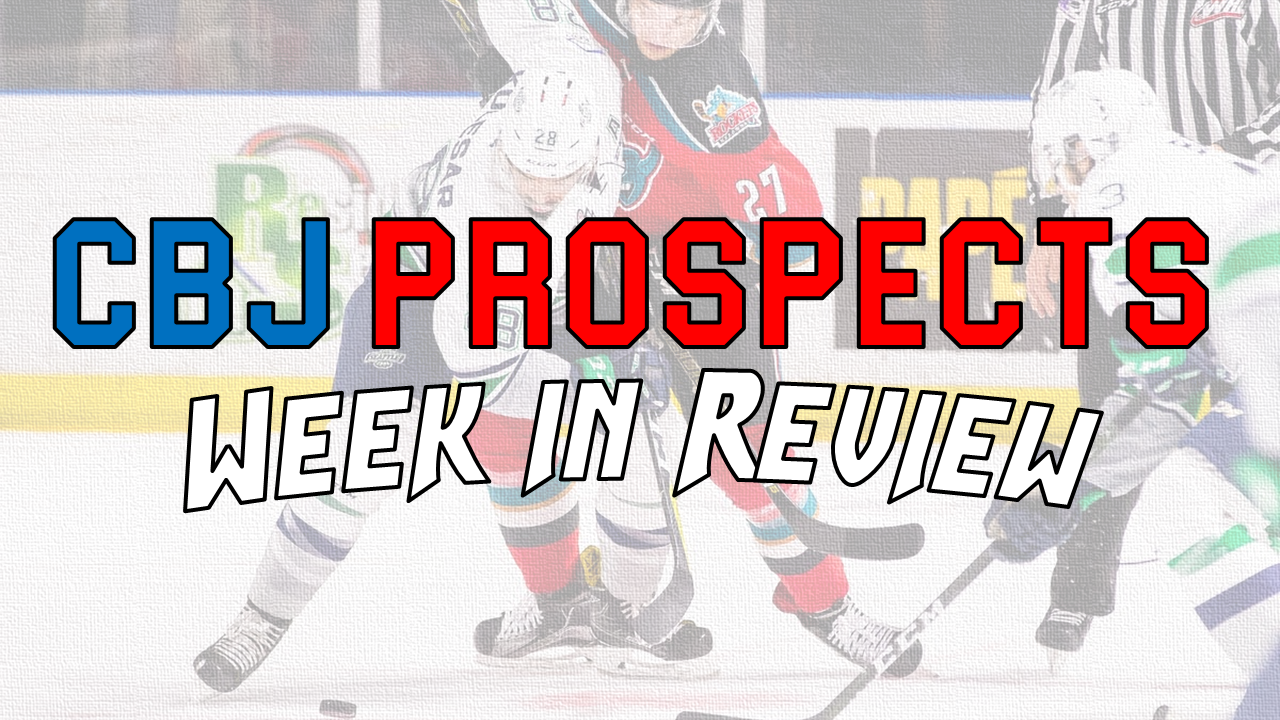 Hello, all. We’re coming to the end of the line on the Jackets prospects season. We have four prospects to talk about in this recap with two of their seasons ending, one happy and one sad.

Pierre-Luc Dubois-Blainville-Boisbriand Armada (QMJHL Defeated Charlottetown 4-1)
Series Stats 5GP 3-4-7 E 2PIM
Playoff Stats 15GP 8-13-21 +6 16PIM
Pierre-Luc and the Armada took on the Charlottetown Islanders in one of the QMJHL’s semifinal match-ups. In game one, the Boats’ guns were silent and they lost 3-0.

Game two went better for Blainville and Pierre-Luc. In the second, with the Armada trailing 2-1, PLD took a drop pass at the blueline before skating into the slot and firing a shot to tie the game at two. In the final minute of the game, PLD picked up an assist on the game winner when his shot was stopped but Morgan Adams-Moisan picked up the rebound to give Blainville a 5-4 game two win. In the victory, PLD was named second star.

In game three, PLD had himself a night including almost going full Harlem Globetrotter on one goal. In the final minute of the first, PLD got a pass and sped into the zone before losing his balance and getting hit. But he was still able to slide a pass to TJ Melancon who scored to make it 2-1 Armada. Late in the second, Dubois passed to Pascal Corbeil who skated through the Islanders defense and shot. Alexander Katerinakis picked up the rebound to make it 4-2 Blainville. Just over two minutes later with Blainville on the power play, PLD picked up an assist when he fired a backhand that resulted in  Joel Teasdale scoring to make it 5-2 in a 5-4 game 3 win.

In game four, PLD had another big night. Early in the first, PLD took a pass and deked around an Islanders defenseman before skating in and scoring to make it 1-0. Late in the third, with Blainville leading 3-1, Alex Barre-Boulet got the puck out of a board battle and found PLD in front of the net to make it 4-1 in a 4-2 win. PLD was named second star.

In the series clinching game five, PLD was held without a point. The Armada won the game by a score of 5-2.

In the QMJHL’s President Cup Finals, PLD and the Armada will play the Saint John Sea Dogs.

Calvin Thurkauf-Kelowna Rockets (WHL Defeated by Seattle 4-2)
Series Stats 6GP 3-6-9 -1 8PIM
Final Playoff Stats 17GP 8-13-21 E 24PIM
In the CBJ prospect battle out west, Calvin got on the board first when he fought off a check and stickhandled behind the net before going in front and sending a cross crease pass to Reid Gardiner. Gardiner fired and picked up his own rebound to give the Rockets a 2-1 lead. Late in the third, Calvin scored when he tipped a Gardiner shot to tie the game at four. The TBirds scored a late goal to give them a 5-4 game one win.

In game two, Calvin earned that Swiss Beast nickname as he factored in on every Kelowna goal. In the first period, Calvin just barely kept the puck in at the blueline before getting it deep to Nick Merkley who scored to make it 1-0 Rockets. Very late in the first, with the Rockets shorthanded, Gardiner pressured a Seattle defender who rimmed the puck around to get it to his teammate. But Calvin was all over him, and got the puck to Gardiner in front to make it 2-0. Very late in the second, the Rockets struck again when Lucas Johansen dumped it in off a faceoff and Dillon Dube tipped the puck to Calvin who sent it to Kole Lind in front where he made it 3-1 Rockets. The TBirds added two third period goals to send the game to overtime. In extra time, Keegan Kolesar had his pocket picked by Gardiner who got the puck to Calvin who passed back to Gardiner who won the game to tie the series.

Game three had a heavy CBJ flavor as Keegan and Calvin supplied all the offense in this game. In the third, Nick Merkley fired a shot that went high and bounced off the top of the net allowing Calvin to bat it in and tie the game one. Keegan scored late in the third to give the Tbirds the game and a 2-1 series lead. Most of the people I follow for Seattle didn’t think Calvin’s goal should’ve counted, especially when you see this photo.

In game four, Calvin kept his point streak alive when, early in the second, he started a sequence by passing to Devante Stephens who got the puck to Nolan Foote. From there, a pass to Calvin set him up to deke through the defense and fire a shot that was stopped, but Nick Merkley picked up the rebound to make it 3-1 in a 4-2 game four win.

In game five, Calvin made it eight straight games with a point when he deflected a Gardiner shot to make it 2-1 in a 5-3 Rockets loss.

In game six, Calvin’s point streak was snapped and his season ended in a 3-1 Seattle win. During the streak, Calvin collected 16 points.

As for next season, I’d say it’s almost a certainty that the Swiss Beast will be in Cleveland, but he does have the option to go back to Kelowna where he would be one of the Rockets three 20 years olds and one of its two imports.

Keegan Kolesar-Seattle Thunderbirds (WHL Defeated Kelowna 4-2)
Series Stats 6GP 3-2-5 +2 19PIM
Playoff Stats 14GP 9-13-22 +10 29PIM
In game one, Keegan picked up an assist on Turner Ottenbriet’s early third goal when he started the rush and found Mathew Barzal who threw the puck in front to a crease crashing Ottenbreit who finished. The Thunderbirds won game one on a late third period goal.

In game two, after a late second period goal, Keegan struck early in the third. Out of a board battle, Ethan Bear found Donovan Neuls who fired a shot that was stopped. But Keegan picked up the rebound and scored for his seventh of the playoffs. Later in the third, Keegan earned an assist when he took a pass and skated into the slot before firing a shot that was blocked. Donovan Neuls capitalized off the rebound to make it 3-3 in a 4-3 Rockets OT win.

In game three, Keegan was responsible for all the TBirds offense. Midway through the second, Ryan Gropp gathered the puck and skated in on a two on one before passing to Keegan in the slot where he buried it to make it 1-0 Seattle. With only 20 seconds remaining, Keegan played the hero when, off a faceoff, Turner Ottenbreit got the puck and fired a shot. The rebound went straight to Keegan in the slot and he scored to give the Thunderbirds a 2-1 game three win. In the win, Keegan was named third star.

Keegan was held without a point in games four through six. He didn’t play much in game six as after being ejected due to a checking from behind penalty 16:08 into the first period.

This is the second year in a row the Thunderbirds will represent the Western Conference in the WHL Final and the seventh time in the last eight years the Western Champ has come from the U.S. Division. However, only one of the previous six has won the league. In the Finals, Seattle will face the Eastern Conference’s Regina Pats who were the best team in the WHL.

Kevin was held without a point in a 3-2 Brynas game two victory.

In game three, a change in linemates got Kevin more involved in the series. In the second with HV71 trailing 1-0, one time Jacket farmhand Dylan Reese passed to Simon Onerud who shot at the net. Kevin was in front and scored to tie the game at one. Brynas won the game 4-3.

In game four, Kevin remained on the team’s top line and didn’t waste the opportunity. In the second with Brynas leading 1-0, Kevin got the puck at the redline, skated into the zone and snapped a shot from the circles to make it 1-1. In the third, Kevin got the puck and drove to the net putting it out in front with a defender tipping it to Simon Onerud who fired to tie the game at two. Later in the third, Stenlund and Onerud combined again when Kevin took a cross rink pass and snapped the puck to Onerud who buried to tie the game at three. The match ended in a  6-4 HV71 win.

Kevin and all his teammates were held pointless in a 2-0 game five loss giving Brynas a 3-2 series lead.

Game six was the game HV71 needed. First off, the team ended Brynas’ goalie’s night just 9:10 into the first and Kevin factored into that decision. He gathered a loose puck and got it out to the point where Christoffer Persson fired a shot. The attempt was stopped but Onerud picked up the rebound to make it 2-0 in a 5-3 HV71 win, forcing a game seven.

Kevin was held pointless but played a season high 20:20 in a 2-1 overtime win that gave HV71 its fifth SHL title. Kevin was on the ice for the game winner and just missed picking up an assist on an almost goal in the third.

There you have it, folks! We’ll be back for at least one more recap but let’s hope we get a Kolesar-Dubois match up at the Memorial Cup.